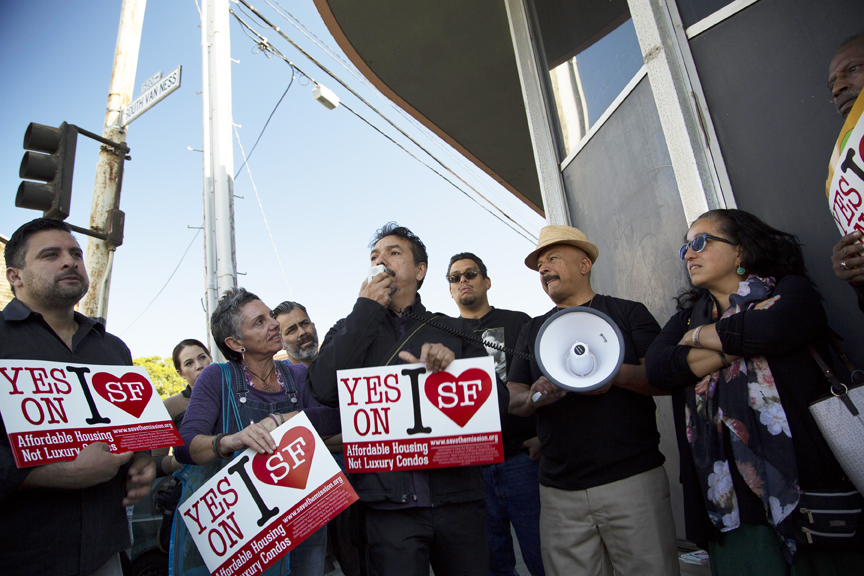 A small group of residents and community organizers protested the Lennar project at 1515 South Van Ness Ave. on April 14, demanding that it be delayed.

Lennar’s proposed development at the corner of 26th Street and South Van Ness Ave. would include 165 market-rate units, with only 12 percent (about 20) of those units being below market rate.

The San Francisco Planning Department is holding a public hearing on April 21 at City Hall, where housing advocates will push commissioners to issue a continuance, which means ruling that the project isn’t ready to be heard.

“The Planning Department is requesting the continuance, and has asked the commissioners to continue it, so we just have to be there to make sure the planning commission does that,” said Erick Argüello, co-founder and president of Calle 24 Latino Cultural District.

Argüello is hoping that the continuance delays the project until after the June elections. Proposition C, if passed by voters in June, would require developers to increase inclusionary housing from 12 percent to 25 percent.

“[Lennar] wants to get this in by the 21st, so that they don’t have to meet those requirements,” Argüello said.

Those protesting the project have argued that Lennar hasn’t completed an Environmental Impact Report and that aside from a low-key meeting in December 2014, has sought virtually no community input for its South Van Ness project.

Housing activists gathered at the development site last year on Oct. 29, and dubbed the project the “Titanic Mess on South Van Ness.” During the most recent demonstration they called for the property to be handed over to the city and used entirely for affordable housing.

“That’s what we’re pushing for, is for Lennar to gift it to the city. The city gifted a lot of the land to Lennar on Treasure Island. So we want them to either gift it, or to sell it at a reasonable price to the Mayor’s Office of Housing,” said Argüello, who acknowledged that protesters and Lennar have yet to meet for discussion. “So this is part of the continuance, because we haven’t had a chance to really sit down, or for them to really engage with the community.”

The project comes at a time when San Francisco remains one of the most expensive cities to rent a one- or two-bedroom apartment, according to Apartment List’s April National Rent Report. The report cited that in the month of March, the average monthly rent for a two-bedroom apartment in San Francisco was $4,780, and $3,550 for a one-bedroom.
Lennar, in addition to its projects on Treasure Island and now the Mission, has a history in Bayview-Hunters Point. In 2005, community organizers led protests against Lennar’s development of luxury condominiums. Those protests however couldn’t prevent the gentrification to the area.

“My family can’t afford to live in Bayview-Hunters Point,” said Marie Harrison, a Bayview resident and community organizer with Greenaction. “In Bayview, affordable housing is a dirty word. When a one-bedroom rents for $3,500 a month, and the average income is not even $35,000 a year—excuse the hell out of me—how are we supposed to survive?”

Lennar’s project is only the latest development in the Mission to be targeted by activists. Developer Nick Podell’s project on Bryant Street between 19th and 18th streets, which housing activists have labeled the “Beast on Bryant,” and Maximus Real Estate’s project at 1979 Mission St., more commonly known as the “Monster in the Mission,” have drawn the ire of the Mission community and activists.

Both projects have since faltered.

Podell told the San Francisco Chronicle in February that he’d donate 41 percent of his project to the Mayor’s Office of Housing and Community Development, to build affordable housing. The 1979 Mission project stalled when Maximus filed a lawsuit in August of last year against the property owners, alleging that the property owners had violated a purchase agreement.

“Until we kill it,” Mission resident Eddie Stiel added.

Calle 24 gets a new home and a new executive director