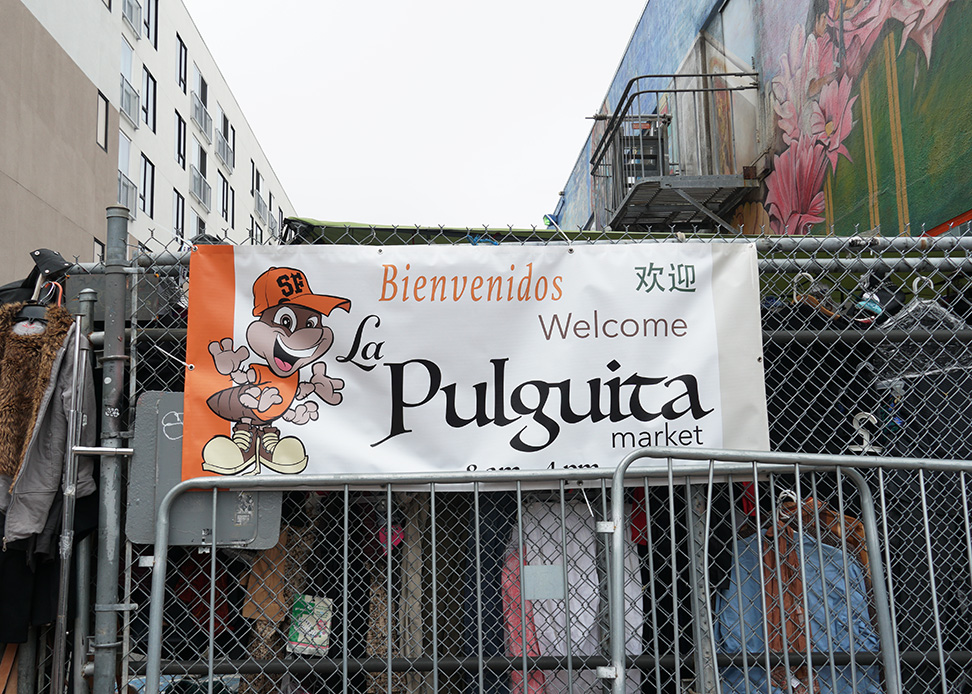 Red, white and blue: A Cuban in the Land of the Free

La Pulguita, the vibrant grassroots flea market that takes place every Saturday in a parking lot connecting Julian Avenue and Mission Street (between 15th and 14th streets), has finally been given the green light, as well as a year’s worth of funding to continue its operations.

Efforts to legitimize La Pulguita, have been ongoing since late 2017, but even with their permit being approved in mid-May, there are no guarantees for its long term survival.

For now, current costs—staffing and street closure permits—are paid for by the city’s “addback” funds, dollars allotted to each district for urgent needs after the city budget is finalized.

“Supervisor Ronen will continue investing in this for as long as it works,” said Carolina Morales, legislative aide to District 9 Supervisor Hillary Ronen. “We hope the Mayor can be a partner to provide long term funding.”

Additional funding comes from SF Armory LLC, the new owner of the San Francisco Armory. The historic building, at the corner of Mission and 14th streets, will ultimately be used for offices and manufacturing.

“We want more companies like that to invest in true solutions to what inequality is creating,” Morales said.

Ronen’s office and the leadership of La Pulguita have committed a great deal of time and effort to create a solution that, they hope, will continue to merit funding, whether public or private.

Over a one-year period, Morales and Ronen conducted an extensive series of meetings with neighbors, market organizers, representatives from the Department of Public Works, San Francisco Municipal Transit Agency, and the fire and police departments.

One by one, hurdles were overcome and neighbors and city officials became convinced to let them try this solution. “We finally got the okay. What had been tried before was not working,” said Morales.

Prior to its official designation as La Pulguita, new neighbors often couldn’t tell the difference between ordinary the street vending and what neighbors called “illegal activity.”

Nearby residents became frustrated with sidewalks that were impassable when vendors were there and strewn with garbage after they packed up. The police received many calls about these issues and frequent fights breaking out.

Life before La Pulguita was harder for unpermitted vendors, too. They had to be ready to flee at a moment’s notice—or risk getting a citation that they had no way to pay.

“People used to use suitcases so they could more easily pack things up when they saw the police coming,” Morales said. “Then they’d unpack after the police left.”

Many of the original complaints came from residents nearby in relatively new market-rate apartments. One of these buildings, Vara, uses marketing language suggesting a luxurious but hard-won lifestyle.

“This is your time. The life you’ve created is one you work hard for, and you deserve to enjoy every second,” reads Vara’s website.

Some of the “life-long residents” the site refers to have been pushed out of the city by rapid gentrification.

For example, a 2015 study by the Board of Supervisors budget and legislative analyst cited a continuous decline in the Mission’s Latino population from 60 percent in 2000 to 48 percent at the time of the study.

And whether these newcomers really want life-long residents “right outside” their door is up for debate. (Vara did not respond to requests for comment.)

“These white folks say they want culture, but don’t want it in front of their house,” said longtime activist and Mission resident Roberto Hernandez.

Open-air markets have been a tradition in San Francisco for decades, a tradition that is part of the culture of multiple waves of immigrants.

Larisa Pedroncelli, La Pulguita organizer and member of United to Save the Mission, said that the market reflects this cultural legacy.

“A lot of longtime neighbors are thrilled about this market,” she said. “We like to be outside, we like to gather in open plazas, to meet up, to have fun.”

John Brett, Site Coordinator at the neighboring Gubbio Project at St. John the Evangelist Church—which serves unhoused individuals and is located down the street from the flea market—has been impressed with the success of La Pulguita, after originally having some questions of his own.

“One thing I found helpful was that Supervisor Ronen and her staff were amenable to making adjustments so everyone might be heard,” he said.

One adjustment organizers agreed to was to flip the orientation of the market so that the majority of the action would be closer to 14th Street and farther away from the more residential end of the street.

Even the people running the decades-old Arriba Juntos market were worried about the plan. The Arriba Juntos flea market operates in the parking lot adjacent to the Arriba Juntos building. (Julian Street, where La Pulguita happens now, runs perpendicular to that lot.) Vendors and leadership of this city-permitted open-air market were concerned that La Pulguita vendors would bring the chaos and fights that had previously characterized the sidewalk market.

Once they were reassured by Morales and Ronen that any problems at the new La Pulguita would lead to its closure, Arriba Juntos gave a clear vote of confidence.

The project’s six-week pilot was by all accounts a genuine success. There were no neighbor complaints and, after a two-month hiatus to finalize permits with the city, it reopened for good in mid-May.

Now La Pulguita operates like a well-oiled machine. Vendors line up before the market opens at 8 a.m., receive a badge on a lanyard (with a cartoon picture of a flea on it, designed by San Francisco-based artist Sirron Norris) and are assigned one of 54 tables.

Vendors at La Pulguita represent the rich diversity of San Francisco. Unes is Moroccan and is a former Uber driver. The money he makes from selling hardware, clothing, and accessories helped him pay his April and May rent. Ming Lei lives in the Excelsior. She uses the income to help her pay rent and buy food. Calvin was selling a crystal wine decanter a few Saturdays ago. He doesn’t drink, so he wouldn’t put wine in it himself, he said, but he joked that he would keep a genie in there.

When asked what he’d wish for, Calvin said: “To be a millionaire with a huge mansion and an expensive car.” Would he donate any of his money? “Oh yes, I would be very generous.”

Harold Lee Brown, an activist and outspoken advocate for marginalized communities in San Francisco, is a regular shopper at La Pulguita and believes that Mayor Breed should fund it in perpetuity.

Brown’s finds on a recent Saturday included a $52 Lord Voldemort wizard wand—in the box—for $5 and 12 pairs of “diabetic socks” from Hollywood Pro for $15.

As the cost of living in San Francisco becomes increasingly beyond the reach of so many of its long time residents, community resources like La Pulguita become even more critical for San Franciscans—whether vendors or shoppers—who struggle to make ends meet.