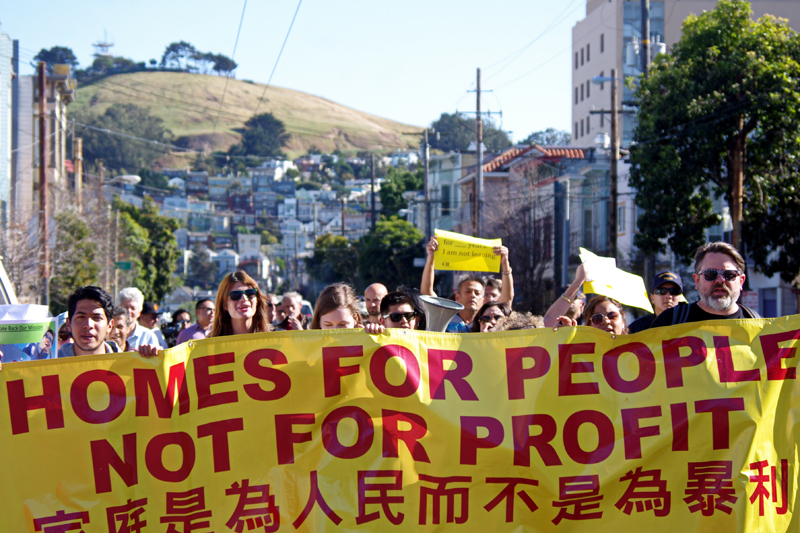 Letter to the editor: the 33-Stanyan Muni bus line

Close to a hundred protesters marched down 24th Street and then turned onto South Van Ness Street April 16, after Mission District residents held a press conference at 24th and Bryant streets calling for an “eviction-free zone.”

The proposed plan would protect Mission District families and long-term residents from potential evictions by calling on landlords to sell properties to community non-profits, instead of to developers. The area included in this “eviction free zone” stretches from 20th to Cesar Chavez streets, and from South Van Ness to Potrero streets, an area that has been severely impacted by waves of gentrification. The 94110 ZIP code, which includes the Mission District, saw as many as fifty eviction filings in the first two months of this year alone, according to the Alliance of Californians for Community Empowerment (ACCE).

The ACCE co-organized the event along with the Mission Economic Development Agency (MEDA), tenants who are fighting displacement and other community members. Staffers from District 9 Supervisor David Campos were also present.

Escorted by a strong police presence, protesters gathered at 22nd and South Van Ness streets in front of the building where Carlos Gutierrez has lived for 35 years. His family has been there for three generations.

Gutierrez, who works for a youth-serving nonprofit in the city, was shocked to see a sign announcing that the property he lives in was for sale.

“We want to keep the building affordable,” Gutierrez said. “We have been fearing eviction since they put up the sign.”
Gutierrez’s family would like the property to be sold to a nonprofit.

“We want the policy makers to put more into these funds,” he said. “I have seen a lot of change, many people getting displaced, including several generations and families. Most buyers are just speculating; it is pure greed. People who buy the properties don’t even live here.”

Marti Sousanis, who has lived in San Francisco for over 50 years, shared her experience during the protest. She was evicted from her previous home eight years ago. A journalist and writer working from home, Sousanis is once more under the threat of being evicted.

“My home is not just my home, it is where I work. If I lose my home, I lose my business, my way to live,” she said. “My landlord keeps raising the rent so he can follow the market price. He just wants to sell the building. I can’t afford to stay, and I can’t afford to leave.”