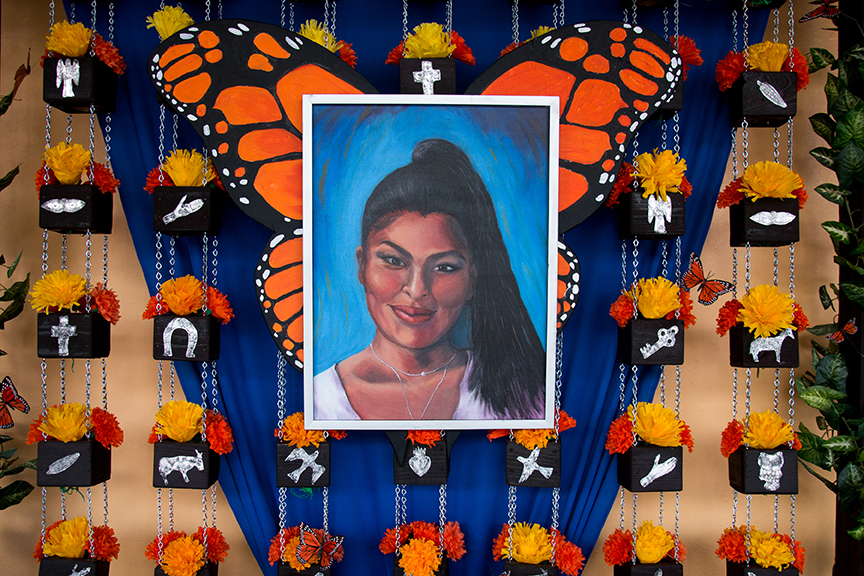 “It was really emotional for me,” Carrasco said, as he remembered finishing the portrait of Susana Robles Desgarennes, a former student of his. “I feel like she was there. And I got really sad.”

A 20-year-old mother, artist and entrepreneur who spent much of her active youth in the Mission, Robles Desgarennes died on Sept. 30, 2017. Multiple news outlets reported that she was killed by her ex-boyfriend in a murder-suicide, their bodies found in a car in the Dolores Heights neighborhood.

As Carrasco learned of her death, so did her other educators Ingrid Garcia, Carlos Castillo, and Victor Carrillo, all of them met Robles Desgarennes through the Good Samaritan Family Resource Center when she was a 6th grade student at Everett Middle school.

The news brought a combination of horror and disbelief. “It tore us up,” Carrasco said.

Carrasco, Garcia, Castillo and Carrillo met Robles Desgarennes when she was 11. Originally from Manzanillo, Colima, Mexico, Robles Desgarennes became involved in afterschool programs run by Good Samaritan, which were designed for youth who had recently arrived from other countries. They took field trips and participated in various activities where her “magnetic” personality quickly stood out; she made friends and excelled in art.

“Her smile kind of radiated, and just made you want to be around her,” said Castillo. He remembered one particular field trip where Robles Desgarennes’ saw snow for first time.

She also attended youth summer camps, and as she grew she became involved in Good Samaritan’s Latino Student Union and RebelArte—a youth program that supports Latino immigrant teens in developing their leadership and identity.

“She was a leader in that group,” said Garcia, who was her art teacher. “She really pushed other students to participate and to finish their projects. She really loved art and fashion, and that’s something that you could see in her work.”

When she graduated from Everett, she attended The Academy at McAteer high school and continued to participate in Good Samaritan youth programs, focusing on art. She helped make a kite for Día de los Muertos, danced in Carnaval, and played in Loco Bloco. She was also a Sister Rising Intern at the Young Women’s Freedom Center in 2013.

Then halfway through high school, she became pregnant with her daughter, Angel. After enrolling in the city’s County Adult Assistance Program (CAAP), she received her high school diploma.

“As a growing adult, she was always envisioning her future,” Carrasco said. “She had a child at a young age, she didn’t let that stop her.”

Robles Desgarennes’ love for art blossomed into a passion for makeup, which earned her a job at Sephora as a cast member at the Embarcadero store in San Francisco.

“I identified her as being an incredible artist at that young,” Castillo said. “She was really, really gifted. And I’m not just saying that to be nice.”

“She just blossomed into a very creative young woman,” Garcia said. “It’s very sad. It’s something that I can’t describe. It felt like a star left the sky. She had a lot of influence and a lot of people looked up to her, and she made her own path…she wasn’t a follower. Whatever she wanted, she worked for it.”

In honor of her memory and passion for art, Carrasco, Garcia, Castillo and Carrillo collectively decided to build an altar at Mission Cultural Center for Latino Arts, a place where Robles Desgarennes participated as a youth in a Día de los Muertos exhibit.

“I just find it unbelievable that it happened,” Castillo said. “I know I’m going to be here [for] Día de los Muertos, I know a lot of people that are close to Susana are going to be here, but I feel like Susana is going to be here too…like she’s going to pop up at any moment, because she was such a central part of that. I can’t believe how senseless this is.”

For the altar, Carrasco painted the portrait. Castillo built the frame, while Garcia worked on the milagros and flowers. Carrillo cut and painted wooden boards in the shape of a butterfly and of the skyline of San Francisco and Manzanillo. The butterflies illustrate Robles Desgarennes’ life as a monarch, living her life and then returning to where it started. (Her parents are currently taking her ashes to Mexico.)

“I wanted to represent her journey,” Carrillo said. “The journey people make to this country isn’t just physical, it’s a transformation, where she grew. If we look at it in that sense, it’s a long journey that she did.”

But her death has made Carrillo also question his own role as an adult and educator.

“Working with youth, I see the dangers they go through,” he said. “Working with them all of these years, investing all this time in them, we’re really hopeful when we see them overcoming these dangers and working through the traumas they’ve experienced. Seeing these young men and women, with so much strength and seeing them grow and develop, an end like that is really unexpected. It affects us.”

“We have to keep working harder to reduce those dangers for our youth,” Carrillo said. “Violence…patriarchy, machismo. It impedes, in this case specifically of Susana, a powerful young woman, from continuing to grow.”