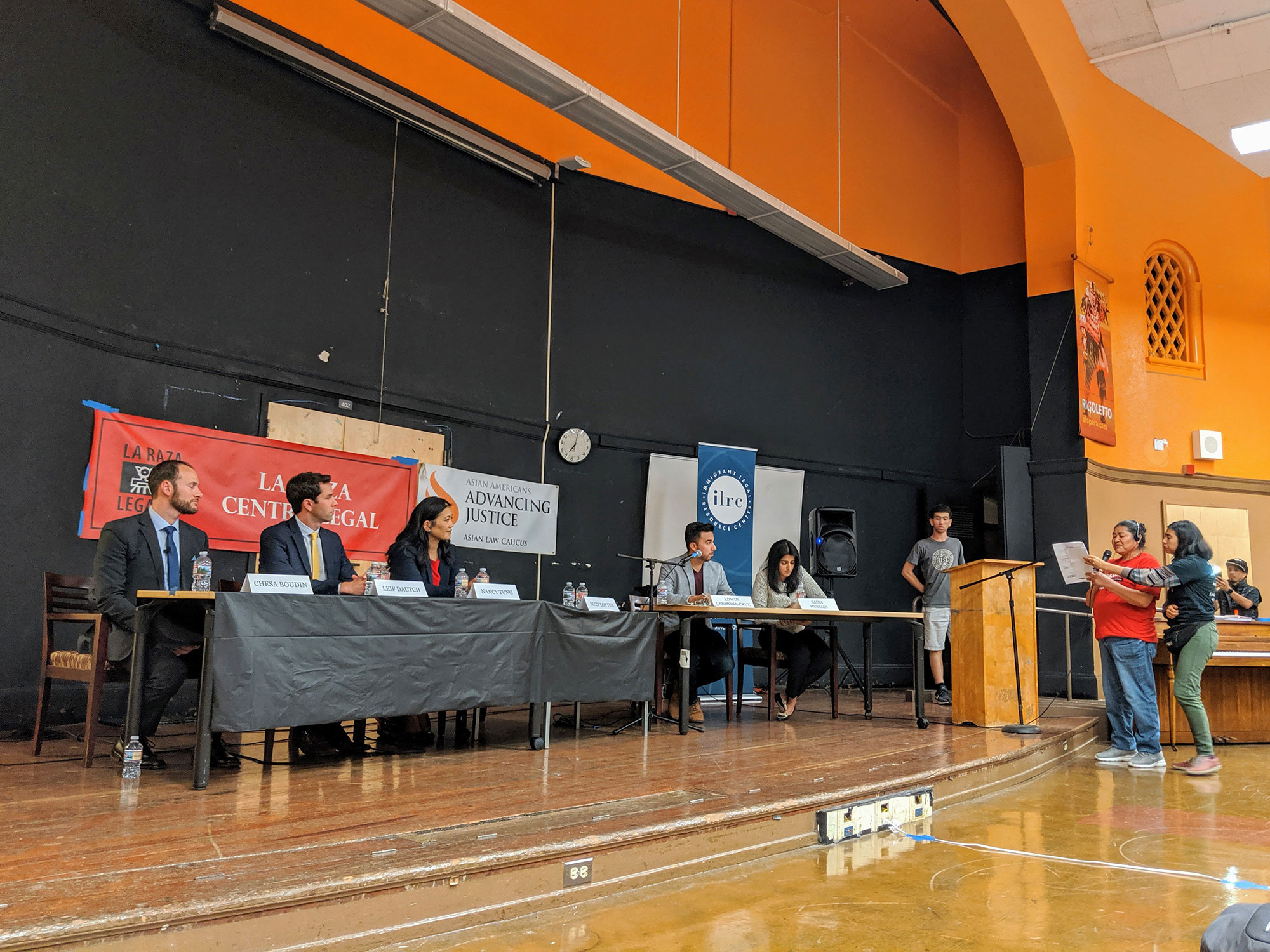 San Francisco will host its first open District Attorney election in more than 100 years on Nov. 5. With the race heating up, the D.A. Immigration Debate Forum—hosted at Mission High School on Oct. 7 by FREE SF, an immigrant and criminal justice coalition—promised a contentious night of community concern and engagement.

This year’s race garnered widespread media attention and public outrage after Mayor London Breed unexpectedly appointed one of the four candidates, Suzy Loftus, as Interim District Attorney just three weeks away from the election. Those attending the forum did not shy away from voicing their disapproval of Loftus’ appointment, perceiving it as an interference in the democratic process.

Attendees vocalized their concerns and mistrust of law enforcement among immigrant communities, grilling Loftus and the other candidates, Chesa Boudin, Leif Dautch and Nancy Tung, on how they would commit to protecting the Sanctuary City policy.

“I’m behind sanctuary city policy 100 percent,” Tung said. “As a domestic violence prosecutor, I saw how victims of crimes felt they could not access services or law enforcement because they were afraid of being deported. [Sanctuary City laws] make our communities safer and we can be a voice that protects all communities and gives people access to the criminal justice system and not just people who are legal in our country.”

Boudin spoke of working as an attorney on the defense team of an undocumented woman charged with shoplifting, who was slated to be deported, regardless of conviction. Partnering with victim and immigration advocacy groups and the Public Defender’s office, Boudin and his team were able to help her become the first immigrant in the city to not be deported following a criminal investigation. “I’m the only candidate who has committed to creating an Immigrant Rights Unit [in the District Attorney’s office], as well as one in the Public Defender’s office that will be a model for the entire country,” Boudin said.

Dautch recounted a case he worked on as a California Deputy Attorney General, involving a young undocumented woman who was sexually assaulted, but hesitant to come forward out of fear of deportation. Because of the city’s sanctuary policy the young woman felt comfortable coming forward and, because of her help, the city was able to successfully prosecute a serial rapist.

“I am proud to live in a Sanctuary City and I will fight like hell to defend our policy-locally, throughout the state, and nationally,” Dautch said. “Over my seven years as Deputy Attorney General, I’ve seen countless cases outlining the public safety benefits to go along with the moral benefits of our Sanctuary City policy.”

Loftus arrived an hour after the start of the forum, as candidates discussed the importance of rehabilitation and diversion programs; the closure of 850 Bryant; police misconduct; and immigrant victims of crimes being saddled with the burden of fighting for access to assistance programs. The candidates were pressed on how they would create alternative victim services that do not require police interaction.

“We are not doing nearly enough. As District Attorney, I will require my staff to contact every victim of every single crime, within 48 hours,” Boudin said. “We’re [going to] have the victim’s services unit in the language that the survivors of crime speak … Second, we’re [going to] guarantee every victim of every crime [the opportunity] to participate in restorative justice if they choose to … I challenge my opponents to do the same.”

Dautch began his statement by recounting an encounter with a mother who was a survivor of domestic violence and was living on the streets with her 9-year-old child because she was unable to access victim support services or housing assistance due to fear of reporting the crime to the police.

“We are requiring people to put themselves in greater harm just so they can access a baseline level of housing services,” he said. “We need to reexamine these things for the interest of public safety, and the interest of this woman and her son, they need to be able to access these programs without having to file a police report … We put out a specific plan for an online rape kit tracking portal so that survivors of sexual assault—in real time, without having to go to the police or prosecutor—know the whereabouts and results of their rape kit.”

At this point Tung interjected:

“[This] issue brings up the bigger issue of distrust of immigrant communities and law enforcement, and that is something I want to address as District Attorney with this idea of Community Centered Justice, it’s in every community and every neighborhood. There is no one size fits all for public safety because every group needs something different.”

Tung also spoke of recent attacks on Chinese elders in San Francisco and the need for language access for reporting and services within D.A. offices. “My priority—and this is something that is very near and dear to me because I am a daughter of immigrants—is to have language access for all victims of crimes.”

Loftus spoke directly to the mistrust between community and law enforcement.

“When we have barriers to trust, they disproportionately affect the communities that need a response,” she said. “I have proposed mobile units that will go out into the community … People find safety in community and often law enforcement has not recognized that fact … [What needs to be done is] to break down that bureaucracy, come to where you feel safe, and bring the services that you need to get better. And that’s my commitment to you.”

What stood out most during the second segment of the night was the overwhelming hostility directed towards Loftus. The vehement scoffs during the pre-assigned question segment of the night escalated when community members were free to take the floor. Some attendees held signs denouncing Loftus for accepting the position as well as declaring her culpability for the police shootings and the homophobic text message scandal during her reign as President of the Police Commission in 2016.

The immigration forum provided an open opportunity for community engagement and a call for accountability from and by the candidates, but the community outrage and mistrust toward Loftus dominated the night, as one can predict will be the tone for the remainder of the election cycle here in San Francisco.