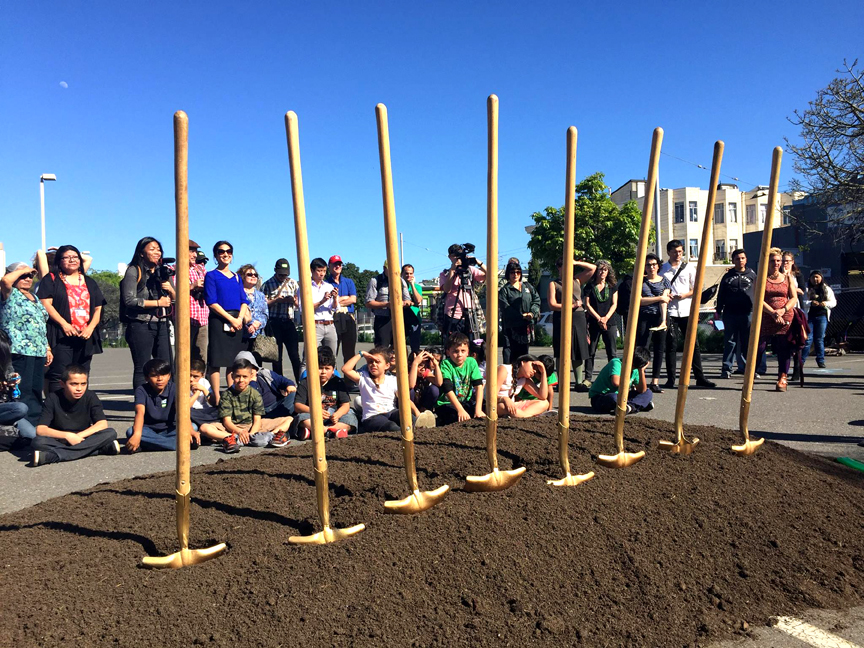 In what is being viewed as a modest victory in the face of the Mission District’s continued gentrification, community organizers and members of San Francisco’s Recreation and Parks Department gathered on March 17 to celebrate the groundbreaking of a new park, which will open next year, at 17th and Folsom streets.

“[We] are blooming in the midst of displacement. We’re still here. We are semillas; we are seeds. We are growing. We are thriving. We are struggling sometimes,” said community organizer Oscar Grande from PODER, during the groundbreaking. “We know [this park] is not going to solve all the issues that we are facing in the community, in our neighborhoods, but we have to celebrate those victories.”

Once converted, the 31,850-square-foot space, which is currently a parking lot, will feature an outdoor performance and classroom space; a children’s play area with an interactive water feature, which then recycles the water for subsurface irrigation; adult fitness equipment; a community garden; native landscaping/drought tolerant shrubs and trees; a wildlife habitat; and educational gardens with lighting and accessible pathways.

“I’m so happy that this park is going to be built right in the middle of everything—in the middle of all condos and the fires and all the evictions happening,” said Elsa Ramos, an organizer from 7 Tepees youth program.

The $5.2 million project is mainly funded by the California Recreation and Parks Department Statewide Park and Community Revitalization Grant, which provided $2.7 million for the building of the park. Other funds and grants came from the city and the state.

The project is the product of a relationship between San Francisco City Hall and more than 300 community members, according to Ginsburg.

The groundbreaking was seen as a symbol of unity and victory for the community and the local government, according to Grande.