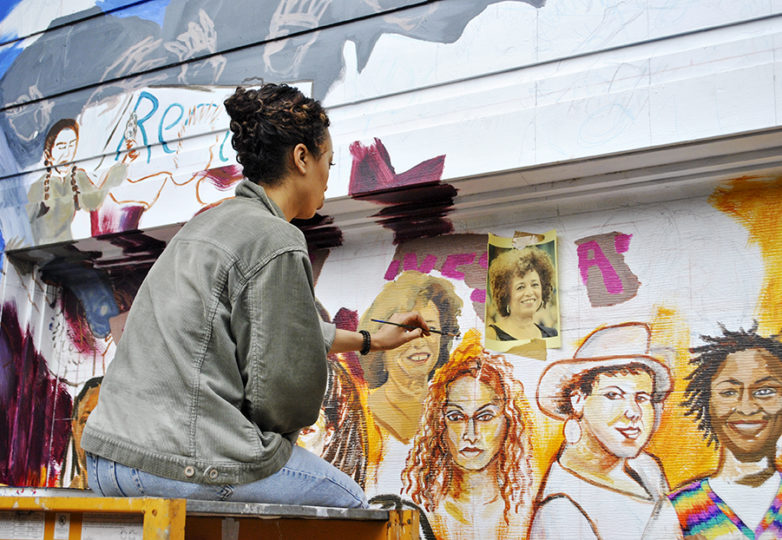 Adrianna Adams works on the “Women of the Resistance” mural in Balmy Alley, San Francisco on Oct. 3, 2018. Courtesy: Daniel Valencia 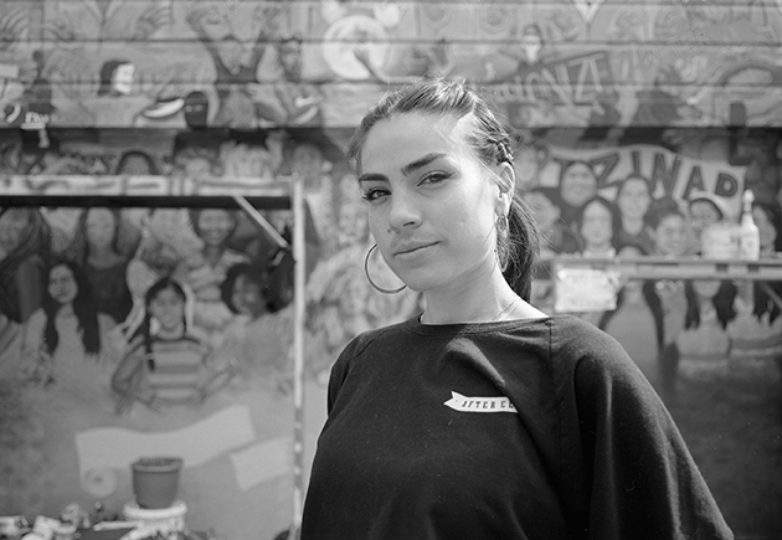 Fernanda Parker Vizcaíno poses for a portrait in front of the “Women of the Resistance” mural. Courtesy: Daniel Valencia 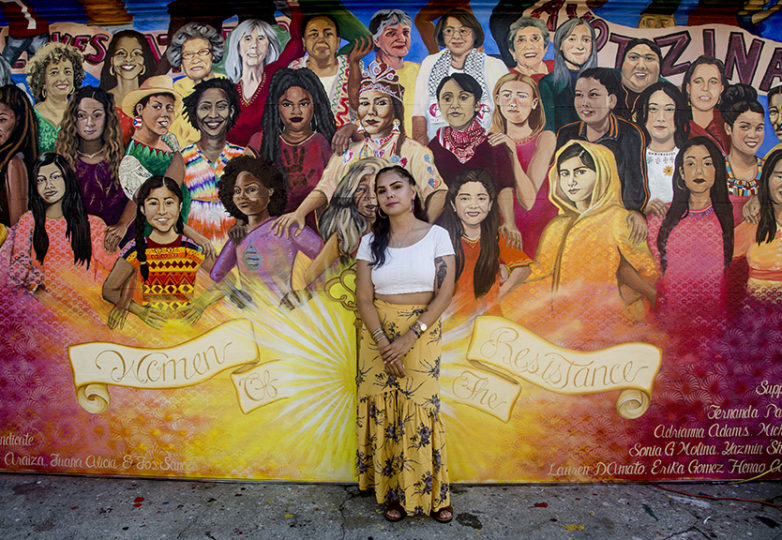 Artist Lucía González Ippolito stands in front of the “Women of the Resistance” mural in Balmy Alley on Oct.13 2018. Photo: Brianna Kalajian

The latest addition to Balmy Alley’s rich collection of murals, unveiled on Oct. 13, is an awe-inspiring homage to the female revolutionaries of the past and those who continue to lead the revolution today. In opposition to the patriarchal rule of capitalism over society, artist Lucía González Ippolito’s “Women of the Resistance” mural instills a sense of hope for women and aims to galvanize the community into joining the resistance effort that these women have started.

Work on the mural began in June of 2018, following the death of local activist and part-owner of the building Judy Brady. Brady, who passed away in 2017, had asked Ippolito about creating a new mural. “Women of the Resistance” replaced a dilapidated piece that had not been retouched since the 1980s.  After a meeting with the San Francisco Poster Syndicate—which was founded by Art Hazelwood at Ippolito’s Alma Mater, the San Francisco Art Institute—she and the rest of her majority-female crew got to work.

“Women of the Resistance” portrays 38 female activists arranged into three rows: the first row includes activists under 20, the second row displays activists between 20 to 30 years of age and the last row holds the “veterans of activism,” as Ippolito put it. The number of these veterans was purposely kept to a minimum when designing the piece, so as to highlight women currently putting in work who don’t receive as much media coverage.

Michelle Williams, a collaborator and friend of Ippolito, listed a few of the women included who may not be immediately recognizable: “A lot of the faces you see are actually women who are active here in the Bay Area such as Cat Brooks, [former] mayoral candidate for Oakland; Nancy Pili Hernandez, social justice activist and artist; Nina Parks, equity activist with a focus on marijuana drug policy; and Barbara Lubin, founder of the Berkeley nonprofit MECA [Middle East Children’s Alliance].”

A list of each activist’s name is provided on either side of the mural for reference. Ippolito said she hopes those who see women they don’t recognize will take it upon themselves to look up their names, learn more about their work and possibly even participate in the programs and organizations they’re leading.

Engaging the community in activism was a key motive behind the creation of the mural. Ippolito had noticed how hopeless she had been feeling about the state of the nation in recent years. She said she views this mural as a means to further educate the community on these issues and encourage action. “A lot of us don’t really know what to do with what’s going on, but the first thing that we can do is invest in what is already being done,” she said.

The three rows of radical influencers are seen supporting a series of protests above them in the second tier of the mural. It is in this top tier where Ippolito makes a point to acknowledge the women behind the scenes of the resistance whose faces we don’t see such as the Zapatistas, Pussy Riot, and Guerrilla Girls.

“These women build upon each other to cut the strings of oppression that dominate our society from the oil industry to the pharmaceutical industry, to the war machines, to the money, to the plastics and the guns,” Ippolito said.

Along the cross beams to which these “strings” are attached read the words “systemic racism” and “settler colonialism,” two of the most prominent power structures in our society.

The power struggle between the oppressors and oppressed is an integral theme of this mural and is represented in various ways. Two specific symbols of power, however, stand out among the rest: the sun and moon. The sun can be seen beaming behind a large golden key at the bottom center of the mural. The moon can be seen hoisted by two bare-breasted women in celebration. Ippolito said the inclusion of the two is a statement about the association between the power of nature and the power of women.

Hamilton: Riff Off or Rip Off?

The very act of painting this mural gave rise to a new unit of female empowerment, personified by several of the women Ippolito recruited:

“When we talked about creating a women’s mural, I was inspired by the thought of having women paint women, so although there are some men in the SF Poster Syndicate, it was very female-dominated,” she explained. “Wanting to include more women painters, I started reaching out to friends who I went to SFAI with like Fernanda Parker, Adrianna Adams. And then I started asking other women that I just know in the community like Sonia Molina and Yazmin Madriz. So, it ended up being this collective of women and when we were painting all together, I had the thought that we should be the new generation of the Mujeres Muralistas—maybe we’d call ourselves Mujeres Muralistas X.”

The original Mujeres Muralistas that Ippolito references was a collective of female muralists from the Mission District in the 1970s. These women were committed to painting representations of their Latina/Chicana culture all over the city in defiance of their male-dominated environment.

Reflecting on her journey as a muralist—from the time she created a Balmy Alley mural in 2012 titled “Mission Makeover,” to helping Daniel Galvez with his “Carnival” mural, to her time spent painting in Palestine—Ippolito emphasised how crucial art is in the movement for social justice and equality:

“When I started realizing how important art is in the movement, that’s when I realized that I couldn’t stop [creating art] and I had to keep doing this because I feel like there’s not really any purpose for making art, for me, unless it’s political. It’s just so important right now.”