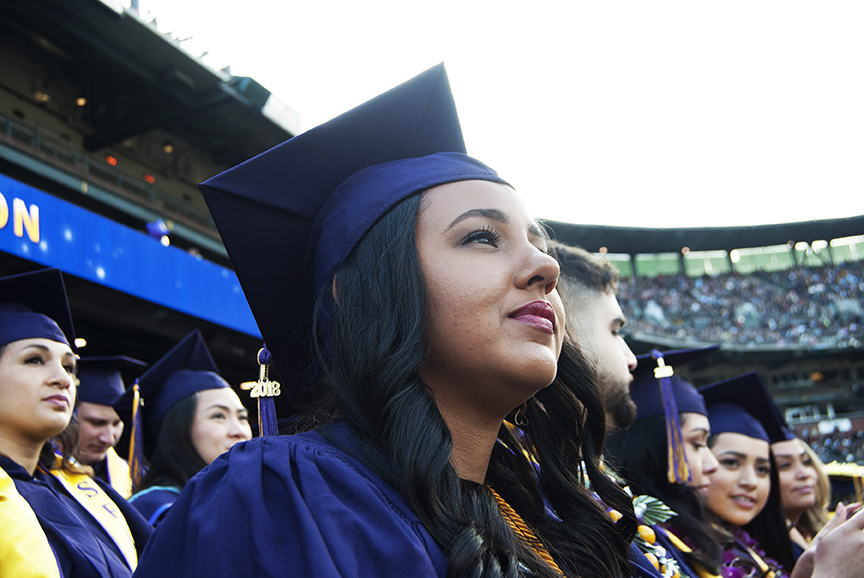 What should have been one of the happiest days of my life, the day I graduated from college, was tainted because of an executive order aimed to protect “the nation from foreign terrorist entry into the United States,” and resulted in the absence of my number-one cheerleader in life—my mother.

My mother has been the most supportive (and borderline pushy) person throughout my life and has showered me with love because of her wish for me to succeed. She has continued to root for me and inspired me to seek a higher education, which only made it worse when the only sign of her at AT&T Park was an empty seat next to my father.

I am what many people who meet me would call an ethnic cocktail. I was born and raised in Stockholm, Sweden, the child of a white Swede and a refugee from Somalia. My family history is the reason I decided to go to college because my mother has continued to show and tell me how important education is for people like us—first or second generation immigrants. Although it took me a few years after high school to decide if I wanted to keep studying (a wait that almost broke my mother’s heart), I always knew I would and it was mostly thanks to her and her life story.

My mother was born and raised in Somalia but fled to Sweden in the 80s before the prolonged civil war in the Horn of Africa broke out. She raised my brothers as a single mother while working and studying at a Swedish university to earn her own degree. She eventually became a Swedish citizen, married my father, had me, and began her new life. Living in Sweden, she occasionally went back to Somalia to visit her family. After years of hard work, my mother decided to retire early. She took this opportunity to move to Somalia in hopes of reclaiming her father’s heritage.

Little did she know she would get penalized for it.

This decision, fighting for her and her sisters’ birthright, resulted in her having to miss her only daughter’s graduation, and the first child to finish college.

The reason why my mother was not present when I officially became a college graduate is that of Executive Order 13780, often referred to “The Muslim Ban.” As of Sept. 24, 2017, “The entry into the United States of nationals of Somalia as immigrants is hereby suspended.” Although my mother has been a Swedish citizen since the mid-1980’s, she has travelled to her birth country after 2011 and lost the power of her Swedish passport because of “additional scrutiny to determine if applicants are connected to terrorist organizations or otherwise pose a threat to the national security or public safety of the United States,” according to the White House website.

This means that the visa-waiver program that works for other Swedish citizens does not apply to her, and she has to obtain an actual U.S. visa. Although some state that this process is fairly simple, it only works if one has access to a U.S. Embassy or Consulate. Since the beginning of the civil war, there is none in Somalia, and for this process to work my mother would have to travel abroad to obtain one, with the possibility of being declined. This process takes time and money, something my mother, who is now retired, simply does not have.

My mother—who has been a lawful citizen her entire life, who has worked hard and always pushed and rooted for me to succeed ever since I moved across the Atlantic to pursue a degree—missed my graduation because of discrimination.

The “Muslim Ban” must end. This type of racism is not universal since people do not penalize all Christians for the actions of the Ku Klux Klan, neither do we shame all men after the Me Too movement. Still, entire Muslim societies are punished for the horrible actions of crazy fanatics. There is no logic to this xenophobia, so let’s show that humans are rational beings and stand up against what is so clearly wrong. These laws only result in divided families—not because of distance, financial issues or disputes—but because the leader of the free world decided that all Muslims are terrorists, including my mother, who wouldn’t hurt a fly, let alone people.