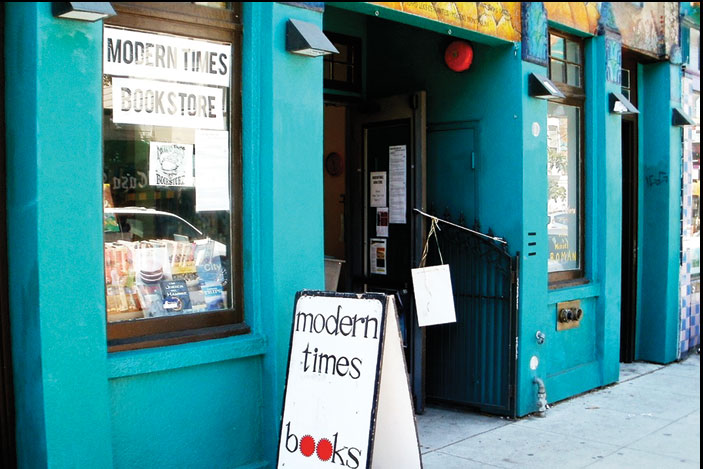 The Mission District has seen a wave of business closures over the last few years, as gentrification and rising rents have made it nearly impossible for small shops and collectives to survive. Modern Times Bookstore, which has announced that it will close on Nov. 15, is one of the latest casualties.

The iconic legacy business has always taken pride in being more than just a place to buy books. It operated as a community space where residents exchanged the kinds of revolutionary ideas and struggles that have become harder and harder to come by as San Francisco’s poets, activists and artists continue to be displaced.

Modern Times was founded as a collective in 1971, the same year as the international book retailer Borders. The chain store—which was operating more than 500 stores in the US in 2010— filed for bankruptcy and was liquidated in 2011.

Modern Times took its name from a 1936 movie by Charlie Chaplin. Set during the Great Depression, the film was widely perceived as a critique of capitalism and the industrial era. One of the films most memorable scenes depicts Chaplin’s character—a factory worker who suffers a nervous breakdown from repetitive work—being dragged into the insides of a machine and is caught within its gears, becoming just another cog.

“A lot of people don’t understand … if they haven’t seen the movie,” said Ruth Mahaney, Modern Time’s longest standing employee. “That’s what our roots are in: leftist politics, Marxism, anti-capital, anti-imperial politics… So the wonderful scenes in there with Charlie Chaplin getting caught in the machinery … [are] sort of representative of what I think people’s politics were about.”

The store had four different locations during its 45-year history, but it was the third location at 888 Valencia Street (from 1991 to 2011), where the problems started. The store was already struggling to pay $6,400 a month in rent when the property owners requested $10,000, an amount the small collective could not afford.

As Valencia Street became gentrified at a faster rate than other areas of the Mission, many residents moved toward the center of the neighborhood, and in 2011 Modern Times followed them with a move to its current and final location at 2919 24th Street.

While the move saved them money on rent, they lost customers and the store, operating at a deficit for the last 10 years, was never able to recover.

“A lot of people peeled off because they just don’t come to this part of the Mission,” said Ashton Di Vito, a manager and book buyer who has worked at the store for the last four years. “San Francisco is very neighborhood territorial, but the Mission is oddly street territorial … the move down here, it was a very big demographic shift.”

The bookstore’s closure isn’t just the result of rent increases but also a general shift in the publishing industry as people read fewer books. Many have also turned to other forms of media, such as e-books, or increasingly purchase their books from online retailers as opposed to brick and mortar shops.

“Some of our customers can’t afford to buy books anymore, it’s not their fault and I wish we could give them to them cheaper,” said Mahaney, adding that the local community supported Modern Times every time the store reached out for help. “People always stepped up to do that, [but] the problem is just too big.”

Of particular significance is the loss of the bookstore’s Spanish language book selection, curated by their Spanish book buyer Graciela Trevisan, a professor of Latin American Literature.

Modern Times will be remembered as a place where readers who found themselves on the radical margins of ideological discourse could find literature that resonated with their views.

“Its contributions in progressive radical literacy and creating a space for discussion and expression will live in the hearts and minds of everyone,” said Erick Argüello, president and co-founder of the Calle 24 Latino Cultural District.

Mahaney said that the Internet has done amazing things for connecting people, but that there is still a real need for physical spaces where people can gather.

“My fondest dream was that I could leave and the store would continue and thrive, and that’s not really happening, I’m hoping that something else will grow out of it and thrive…something, resembling or performing some of the same functions,” she added.

A statement released by Modern Times regarding its closure read: “It is hoped that the store’s sensibilities and sensitivities will linger in the neighborhood long after the doors are closed and the books are gone.”

A closing party and retirement celebration for Mahaney is set for Oct. 22 at 1 p.m. at the bookstore, 2919 24th Street. All pre-scheduled events will continue as planned through Nov. 15.