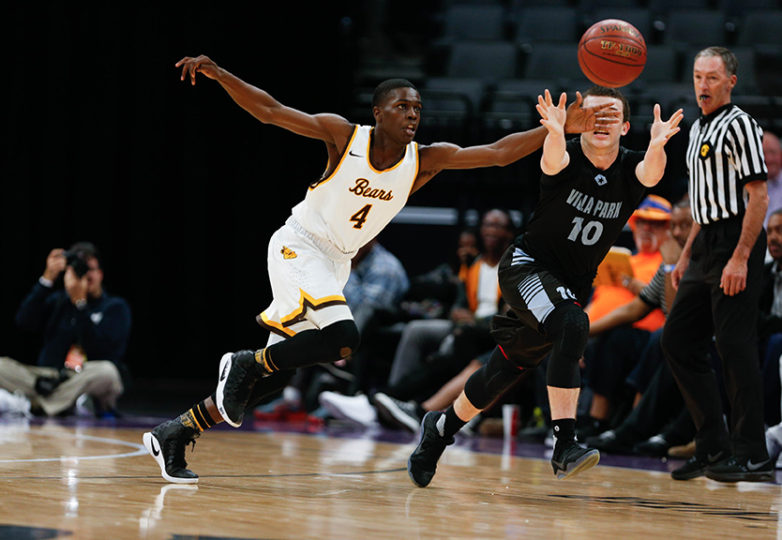 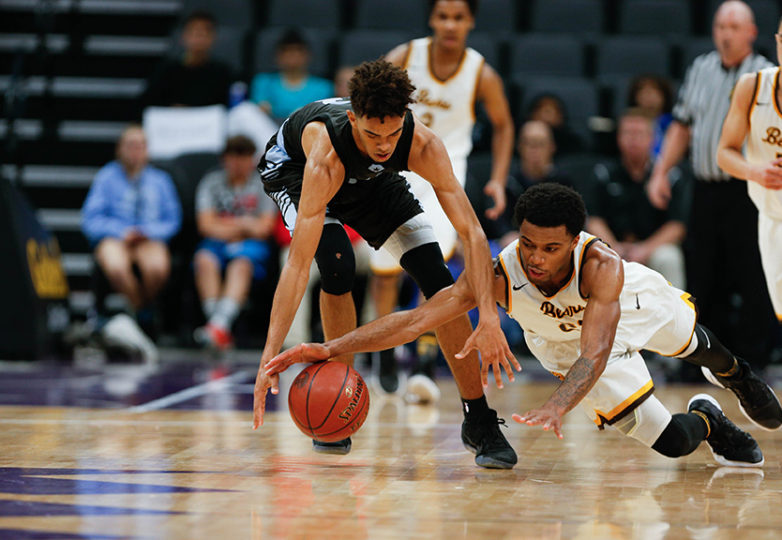 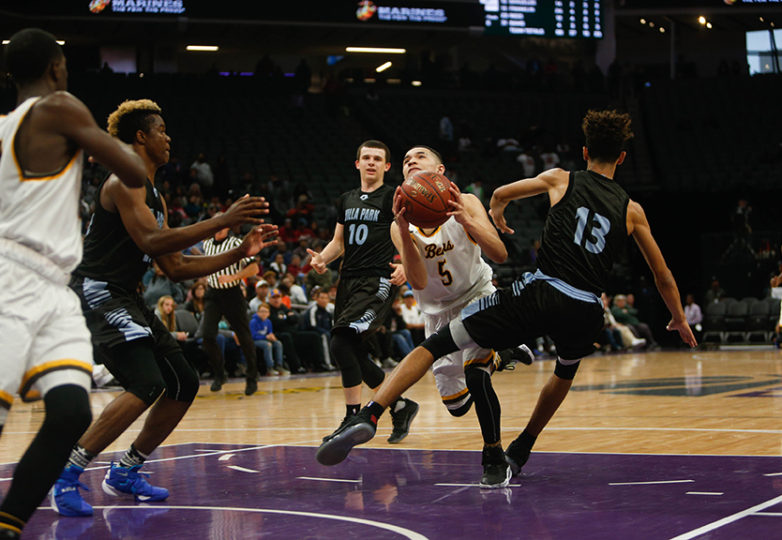 Mission Bears guard Jayden Foston (5) finds his way to the hoop as the Mission Bears take on the Villa Park Spartans in the 2017 CIF Division III State Basketball Championships at the Golden 1 Center in Sacramento, Calif., on Friday, March 24, 2017. Photo: Scot Tucker/SFBay.ca 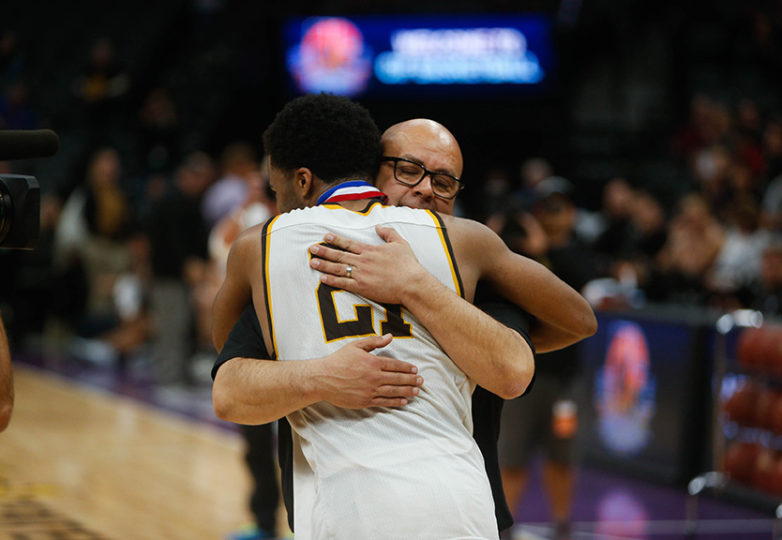 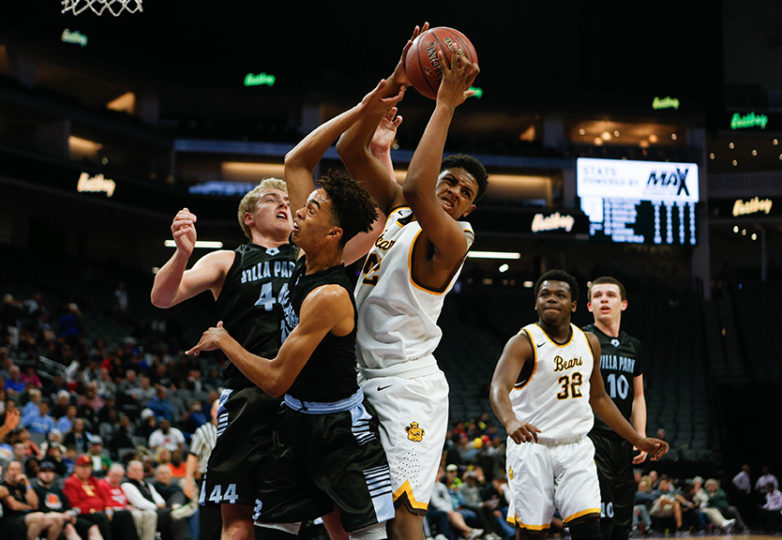 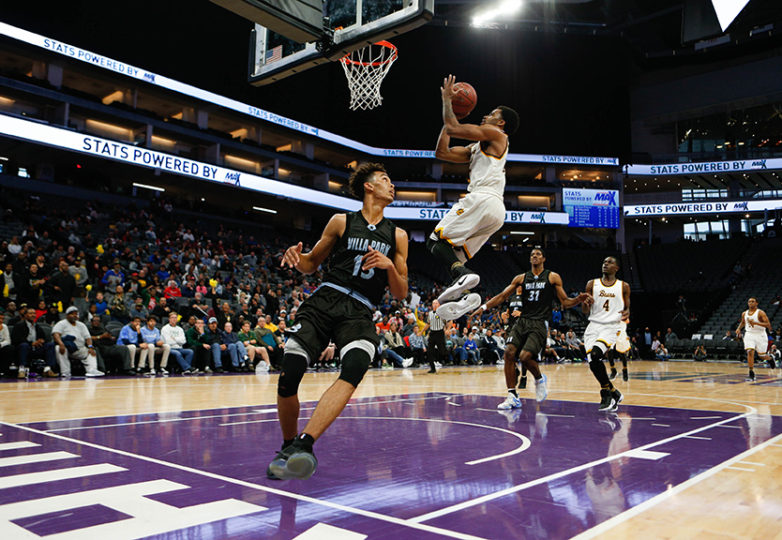 Mission Bears guard Niamey Harris (21) drives to the hoop past Villa Park guard Myles Franklin (13) and scores in overtime as the Mission Bears take on the Villa Park Spartans in the 2017 CIF Division III State Basketball Championships at the Golden 1 Center in Sacramento, Calif., on Friday, March 24, 2017. Photo: Scot Tucker/SFBay.ca 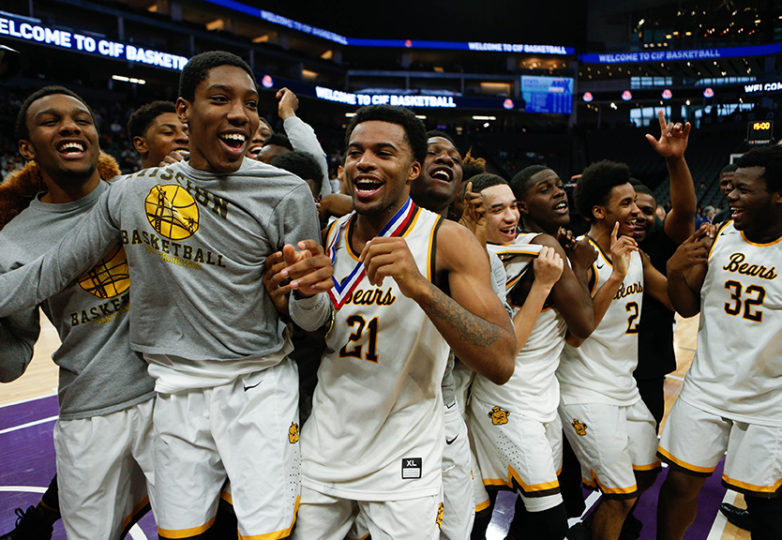 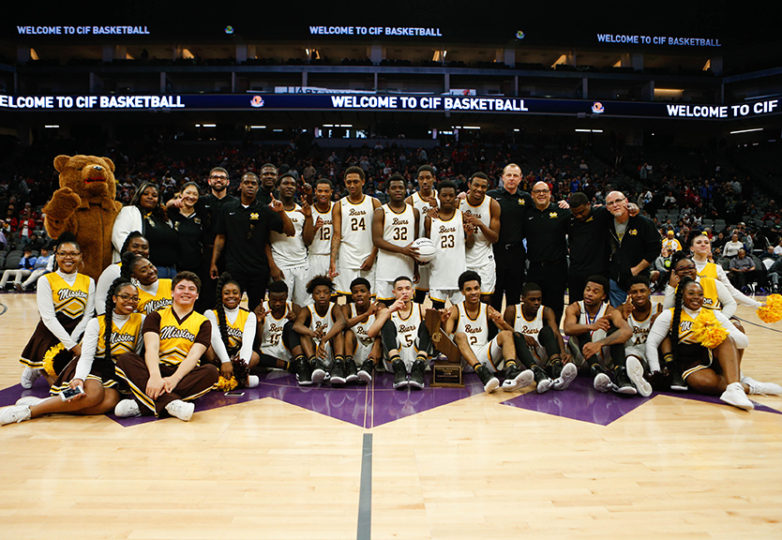 The Mission Bears pose for a portrait after a 82-75 victory over the Villa Park Spartans in the 2017 CIF Division III State Basketball Championships at the Golden 1 Center in Sacramento, Calif., on Friday, March 24, 2017. Photo: Scot Tucker/SFBay.ca

With the high school bands playing, the spotlight focused on center court for the finale of San Francisco’s basketball “Cinderella” story, as the Mission High School Bears (35-1) faced off against the Villa Park Spartans (27-7) for the state championship in Sacramento.

Niamey Harris, the heart and soul of the Bears, savored the moment with his teammates as they stood inside the Golden 1 Center, the home of the Sacramento Kings. He was unsure of how things would unfold over the next two hours of his life.

“The outpour [of support] from the city and from other high school coaches has been amazing,” said Bears head coach Arnold Zelaya. “From all parts of the city, but mostly from the Mission community. These guys have really embraced us and really just believed.”

Harris, a senior and one of three captains on the team, was emotional after the game. The 6-foot-2 guard had a game-high 31 points, but perhaps the most memorable were the final two he scored as the clock was winding down.

With nine seconds remaining in the game, Harris drove to the hoop and dunked the ball with his left hand, capping an illustrious high school career, one of the best in San Francisco history. Mission High fans hugged one another in the stands, students high-fived and the players met at center court, celebrating the biggest sporting accomplishment of their young careers.

“This means a lot, just coming from a public high school in San Francisco,” Harris said.  “Knowing that a lot of teams don’t come this far, so making history is just really amazing and playing for the community is something special. We went through a lot.”

Harris is a native of Bayview-Hunters Point, one of San Francisco’s most impoverished neighborhoods. He lives just a few blocks from where Mario Woods was fatally shot by police in late 2015.

“These guys, I love them,” said coach Zelaya, who is Latino. “African-American males, they have it rough. I can’t pretend to be them, but I love them like they’re Salvadoran, like me. It doesn’t matter. These guys know, they love pupusas.”

Last year, Harris used his athletic platform to voice his activism. Harris, who is also the starting quarterback for Mission High’s football team, followed in the footsteps of the 49ers then quarterback Colin Kaepernick. After the shooting of Woods, Harris knelt on one knee during the playing of national anthem before football games, in protest of police brutality.

“It’s amazing to see the type of man that he’s grown into,” said Caprisha Moody, Harris’ sister. “My goodness, he’s had a lot of support and that brought him this far and we’ve all worked together to help him and let him know that it’s okay to be the best that he can be.”

Despite a few negative comments on social media and much received local and national media attention, Harris’ teammates—some who also play on the basketball team—followed suit.

As for the self-proclaimed “Grimy Bears” (a reference to their hustle, scrappiness and toughness on the court), they have become darlings of the city and one of the best sports stories in the Bay Area.

“It means a lot. It means for public school that we’re here, we’re significant,” said coach Zelaya.  “A lot of times we’re left for dead when it comes to athletics, but winning a state championship ups the bar.”

As for Niamey Harris, the Bears team captain plans to continue on to play college basketball after graduation.

“He’s [Harris] been with me for four years,” said coach Zelaya. “He drives me crazy but I love him to death and he really epitomizes what the [basketball] program is about. He doesn’t stop playing.”