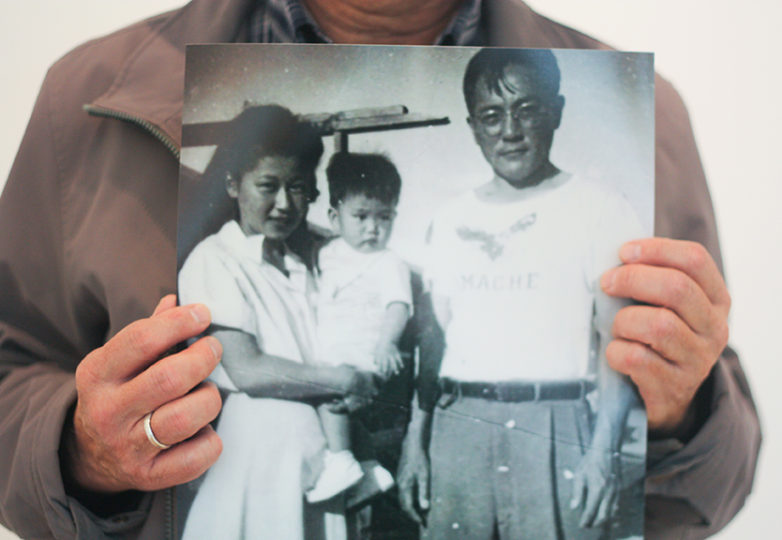 Art Sato holds a photo from his childhood of himself, his mother Kimiye and father Tomomi while they were imprisoned at the Amache incarceration camp. Photo: Alexis Terrazas 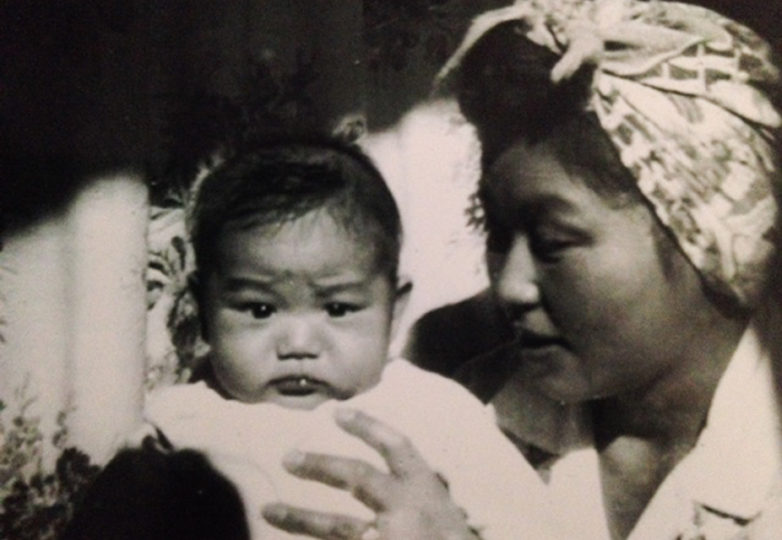 Art Sato and his mother Kimiye at the Amache incarceration camp in southeast Colorado, circa 1944. Courtesy: Art Sato 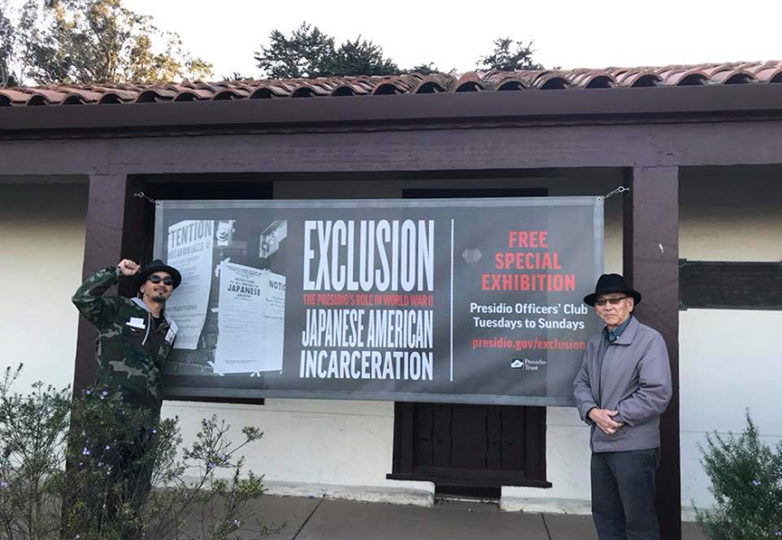 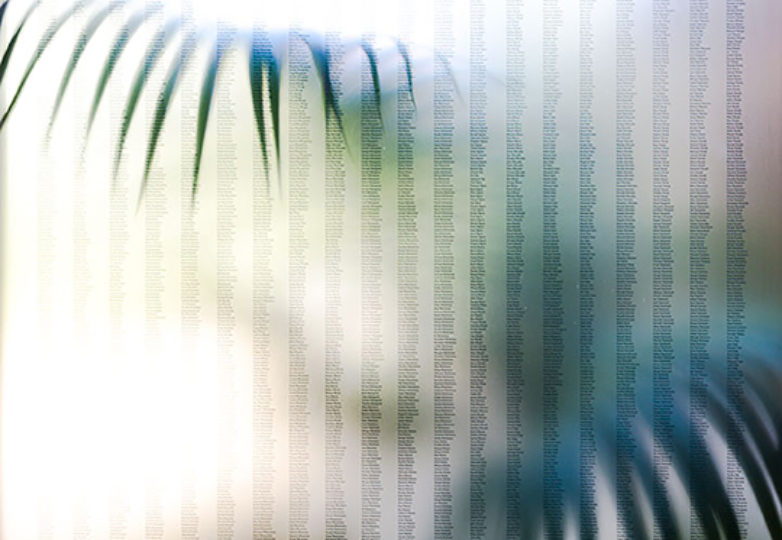 The names of over 100,000 people of Japanese ancestry are displayed on a glass wall at the San Francisco exhibit, “EXCLUSION: The Presidio’s Role in World War II Japanese American Incarceration.” Courtesy: The Presidio

After staring at the massive glass wall inside the Presidio Officers’ Club, which listed more than 100,000 names of Japanese Americans interned during World War II, Arthur Yasushi Sato eventually found the names he was looking for.

“I can’t call it excitement,” Sato said, describing his experience of the exhibit “Exclusion: The Presidio’s Role in World War II Japanese American Incarceration,” which he visited with his son, Ilyich “Equipto” Sato. Together, they located the names of Sato’s father, mother and older sister. “It was this feeling that they were there—acknowledgment that they were there… victims of this grave injustice.”

One name Sato didn’t find was his own. On June 26, 1944  Sato was born (two years into the internment of Japanese Americans) in southeast Colorado in the incarceration camp of Amache, also known by its government name Granada War Relocation Center.

The Presidio’s exhibit opened in April of 2017, 75 years after president Franklin D. Roosevelt (FDR) signed Executive Order 9066, which led to the forced removal and incarceration of 120,000 people of Japanese ancestry from the West Coast.

“The order came from here,” said CEO of Presidio Trust Jean Fraser, during an ethnic media roundtable organized by New America Media on Oct. 5, 2017. “We need to understand why this happened.”

The short answer as to why 120,000 people were incarcerated is fear.

“It’s one of the great ironies that our president [FDR] started his tenure with words about, ‘All we have to fear, is fear itself,’ [and then] created an executive order that empowered a general here to incarcerate more than 100,000 people out of fear,” said Eric Blind, Presidio trust director of heritage programs. “One of the things that we found through our research was how this manifested itself … [through] a series of small actions.”

Before signing those orders, however, Dewitt doubted that incarcerating Japanese Americans—60 of whom were students at the Presidio’s Military Intelligence Service Language School as part of the War effort—should be, or even could be done.

“But there were voices that kept talking to [Dewitt],” Blind explained, singling out Colonel Karl Bendetsen. Bendetsen “kept talking to him about their fears, about their suspicions, about ‘the other.’ About other people in our midsts, and what would happen if decisive action was not taken.”

Dewitt ignored his own initial skepticism (and the due process of American citizens) and set the wheels in motion for Japanese incarceration.

Tomomi and Kimiye Sato were two of those incarcerated.

At the time of their forced evacuation, Kimi was pregnant with her first child, Gloria. While Tom was sent to Camp Amache, Kimi was went to Merced Temporary Assembly Center.

“I hate the name,” Sato said in reference to the temporary camps that held Japanese Americans while the permanent camps were being built and finished. Tom was forced to miss the birth of his first child. “They were separated. After the birth, they put them on a train.”

Of the 120,000 people who were incarcerated, two thirds were American-born citizens.

“That other third were the ‘Issei’ (Japanese immigrants to North America), who were not allowed to be citizens,” Sato said. “It’s not that they didn’t want to be. Because of the racist immigration law of 1926, they were forbidden from being citizens.”

Two years later, the couple had their second child, Arthur. Sato has no memories of Amache, which closed Oct. 15, 1945, a year and four months after he was born. But a lover of jazz, the song “Denver Union Station,” by saxophonist Francis Wong and Fresno-born former Oregon Poet Laureate Lawson Inada, is one that strongly resonates with him. Inada, who also was incarcerated at Amche as a child, tells the story, in poetry and music, of being released from Amache and put on a train to Denver Union Station.

“I was on that train, probably in my mother’s arms,” Sato said.

Sato has never been to Amache, but he plans to visit the site of his birth with his son.

“I’m also very curious about if that train still runs from Granada, to Denver Union Station,” Sato said. “Because I would love to ride that.”

Tom and Kimi decided to stay in Denver and seek out a new home, and had another child, Janet, because Sato explained, “the racism [in California] had even heightened after the war, because they didn’t want the Japanese coming back.”

According to Richard Reeves, author of the book about internment, “Infamy,” one San Francisco Examiner columnist at the time wrote that she would “slit the throat” of any internee who attempted to return to California.

“And this was commonplace. It was normal, it was accepted in the media,” Sato said. Though WWII had ended, the slurs towards Japanese didn’t. WWII movies were huge in the 1950s, as the United States continued to wage wars in Asia. “The dehumanization of the Japanese was just unbelievable.”

The Sato’s did eventually return to Sacramento, where Tom worked as a gardener until the day he retired.

“California was his home, and my mom’s home… the only home they knew,” Sato said.

Tom and Kimi, like many Japanese families after WWII, rarely spoke about the experience with their children.

“There was a lot of shame,” Sato said.

But when Sato and his sisters were old enough their mother did break her silence.

“We were all in elementary school, being indoctrinated, you could say, to the values of American democracy and so forth,” Sato remembered. “And I think it was my older sister Gloria, she was saying, ‘And people didn’t say anything?’”

They did not, Kimi told her children. “That’s the memory I have,” Sato said. “And it wasn’t talked about a whole lot after that.”

Though his upbringing was “apolitical,” Sato began developing a social consciousness after graduating from San Francisco State and being drafted into the Vietnam War as a medic. He was stationed in Thailand.

“Almost overwhelmingly, people were being sent to Vietnam, and medics had a high mortality rate, understandably, because you have to go where people have been shot,” Sato said. “But I lucked out.”

Sato returned to the United States in 1969, and joined the protests against the Vietnam war.

“My parents—and much of that generation—they were so much into assimilating back and becoming good Americans,” Sato said. “And even if they thought this was wrong, [there was this] fear of, ‘We don’t want to go back to the camps, we don’t want you going to jail.’”

After September 11, 2001, Sato’s activist ideals were again brought into focus.

“The left and progressives went into the shadows and didn’t come out for a long time. Everyone knew the response would be war,” Sato said. “But one thing the Japanese American organizations did, because they knew it’s not enough to mourn for the victims—yes, you have to mourn for the victims who are caught up in this horrific thing—but you have to prevent further victims. The victims to come. You have to have the foresight to see what’s coming.”

The victims to come are why Sato feels compelled to tell his story.

“Right now I feel more of an urgency and responsibility to speak out than ever,” Sato said. “It’s important that people who are being criminalized and persecuted and demonized, that they know that they are not alone, that they’ve got a lot of allies here that are willing to do whatever to stop this.”