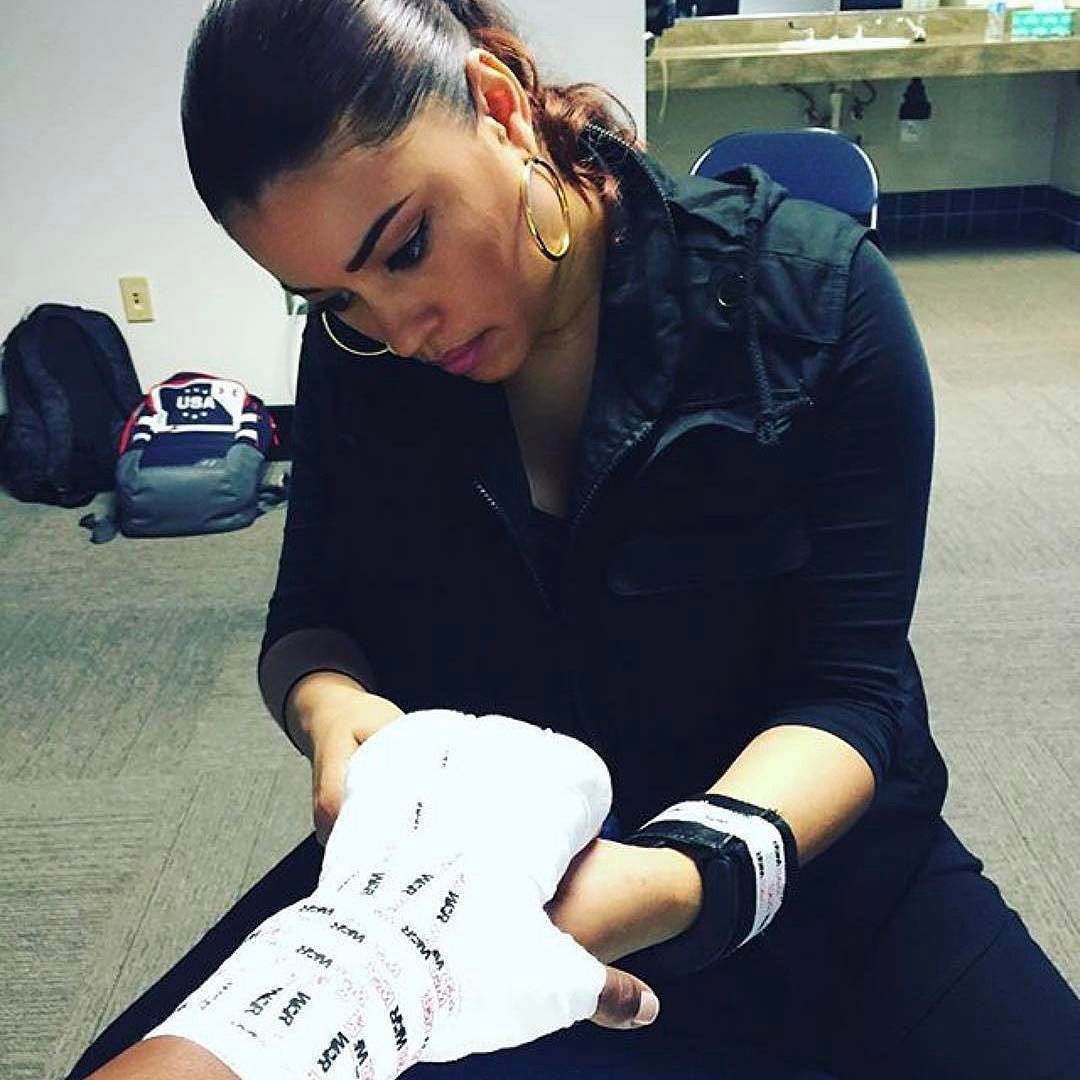 Jayme Mejia—also known as Jaya in boxing and MMA circles—started learning the ropes of the “cutman” trade nearly five years ago.

A cutman (a role traditionally reserved for men) is the person responsible for wrapping a fighter’s hands before a match, and for healing a fighter’s wounds during the one-minute break in between rounds, stopping the bleeding and swelling so the fighter can continue the bout.

A Mission native, Mejia says her calling to combat sports came naturally. She works her day job as a nurse practitioner and as an assistant clinical professor in the Family Nurse Practitioner program at UCSF.

“My family always loved boxing, so we always watched boxing growing up,” said Mejia. “I used to watch and always noticed the old men wrapping the fighter’s hands before the fight. And I always thought to myself that it was an ancient ritual and said to myself, ‘I want to do that one day.’”

There is no such thing as a “cutman school” though. Instead, she studied for and became a nurse, learning hands-on skills and forgetting about boxing for some time.

“We both loved boxing and we used to go watch boxing fights a lot. She is the one who said let’s go to the gym and ask someone to train us,” said Mejia. “Without her, we wouldn’t have had such an amazing ride the past five years.”

At King’s Gym, Mejia and Torrez first learned how to wrap the hands of amateur fighters with cutman Pete “Ice Pac” Alvarado. They went on to be mentored by many elite cutmen in the game, including Jacob ‘Stitch’ Duran, Robert Garcia, Mike Bazzel and Mike Rodriguez.

Mejia recognized early on that despite the striking differences between the sterile environment of the medical world and boxing (“where everything is dirty”) her experience as a nurse helped her. She learned fast and remained calm amid the chaos of crowds, lights, and cameras, of seeing a fighter covered in blood.

“It was growing up in my neighborhood that gave me the experience with bloody fights and severe head and hand injuries,” she said. “Then I became a nurse and put those experiences together for boxing. I learned things growing up in my community that I didn’t learn in nursing school that I still use every day in my practice as a cutwoman and a clinician.”

But in a sport ripe with eccentric personalities and egos, Mejia’s journey hasn’t been easy.

“While there is so much to learn, what is more difficult is in regards to the politics, in being a woman in a male-dominated super territorial and old-school sport,” Mejia said. “When you are first learning, and apprenticing/volunteering, they like to use you, but then, once you’ve gotten experience and numerous pro bouts under your belt to the level of the cutmen, people don’t want to pay you the same as a cutman, or will purposely sabotage your job because you are a woman.”

Mejia said that even the fighters often aren’t treated fairly. “I also see the men play each other too. And it’s just the nature of the fight game.”  But regardless of the challenges, the amazing people she has grown to know have made it all worthwhile.

When she started there was one well known professional cutwoman in the United States: Swayze Valentine, who made history as the first cutwoman in the UFC.  Based on her story, Mejia had in mind that it was going to take her seven or eight years to get an opportunity to work in professional combat sports. But a year after being introduced to the sport, Mejia got her first opportunity to work a pro boxing match.

A Statement on Super Bowl LIV: We are not your mascot

“My initial goal was just to work one professional fight but I think I’ve done over 30 by now,” she said. “I’ve achieved more than I ever thought possible in such a short time. I’ve worked with and developed working relationships with some of the top current and upcoming fighters and teams in the sport right now.

As with everything, being a cutwoman has positive and negative aspects, but for her, the positive outweighs the negative, although the negative “can be a lot of drama and draining.”

“You have to have a thick skin,”  she said. “I’m sensitive by nature, but you can’t let that stop you … boxing and MMA is a brutal and bloody sport, you have to be prepared to suck it up.”

Mejia, who is Filipina-Salvadoreña said she thinks modern fighters are actually those born with warrior spirits, and in ancient times would have been our community guardians. Without an outlet such as boxing, youth in diaspora often turn to gang life to cope with historic, generational, and chronic traumas. Boxing for Mejia has also been a useful intervention with the youth she mentors to keep them focused, and to learn discipline, respect, develop a strong work ethic, and honor.

“Seeing somebody that comes from little to nothing work all those years and sacrifice after sacrifice for their family to one day get to their big shot, that is the part that I love,” she said. “Anybody can be successful no matter where you come from.”

In the last few years, Mejia has seen a couple of other cutwomen on TV. And she has advice for the next generation of girls:

“You have to practice, practice, practice, wrapping hands and working cuts every day for however long it takes to get there,” she said. “It is okay to get discouraged or upset, you just have to gather yourself in private and then come back and do your job, and do it the very best you can.”

Canelo looks to defend crown versus dangerous Golovkin on Sept. 16