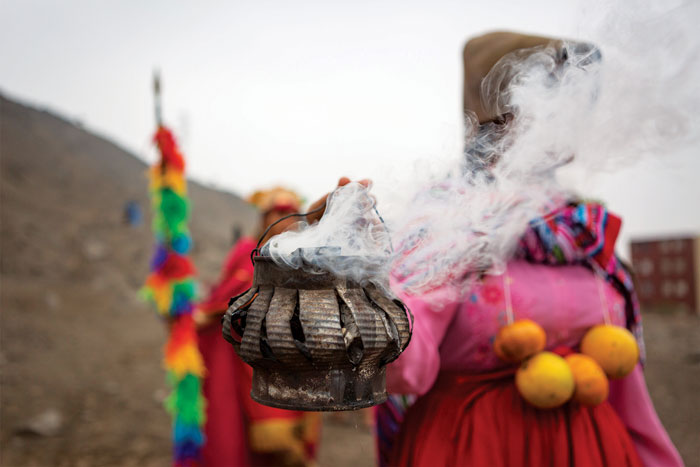 On the morning of the Sun Festival celebration at the revered monument Fortaleza de Campoy in Lima, Peru, a woman asked: “Where is the sun?”

Four days before the celebration on June 22, the winter solstice widened the distance between the sun’s rays and earth, therefore cutting down the hours of sunlight per day.

Because they were aware of what this meant for nature, the ancient Incas celebrated the winter solstice with a lavish party called Inti Raymi. This celebration was likely held to ask the god Inti, or “the sun” in Quechua, to remain close and to return as soon as possible.

Ten centuries later at the ruined temple situated in the highest part of the San Juan de Lurigancho district, a sad haze occupied the city, vaguely suggesting that the city of Lima had been left without sun and therefore without a god.

That day, Professor Arturo Vásquez arrived at the Fortaleza de Campoy with an authoritative conviction, bearing a rainbow flag wrapped in a mast while balancing a nylon veil that draped over his red poncho. In hopes of reviewing the script of Inti Raymi, the professor searched for his students from the public university Daniel Alcides Carrión. He found them wearing multi-colored Andean dress anxiously awaiting the start of the ceremony.

Each year, for the past nine years, Vasquez, his students and the Instituto de Cultura y Medio Ambiente in Lima, have staged this ancient festival that merges magic and religion.

“This has never interested Mayor [Carlos] Burgos. He never so much as moved a finger, this being Peru,” Vasquez said of the mayor of Lima’s most populous district San Juan de Lurigancho. “This is our reality. Look at this place.”

Chunks of mud and stone walls that once were, now lay disjointed and without hope. Few walls still stand, being held by pre-Hispanic ingenuity—thick walls that support others that are even higher in case of earthquakes.

“People do not see the potential of this place, the valuable resource this can be for education and tourism, which can develop our community, which is immersed in drugs and gangs,” said Vasquez. “Turning a blind eye on everything only happens in our Peru.”

In 1998, the Fortaleza de Campoy was occupied illegally by a housing association, and in 2014, about 200 families were evicted by order of the former Lima mayor Susana Villaran. At that time, the Ministry of Culture in Lima revealed that 70 archaeological sites had been occupied.

For the final act, a dance carnival called Pukllay Qarmenjas was prepared.

Bustamante was the last to leave the temple of Fortaleza de Campoy. Despite the prayers, chants and offerings dedicated to Inti, the ceremony had taken place under a cloudy sky.

Then the sky over Lima cleared, opening a path to the golden sphere that the Incas called God.