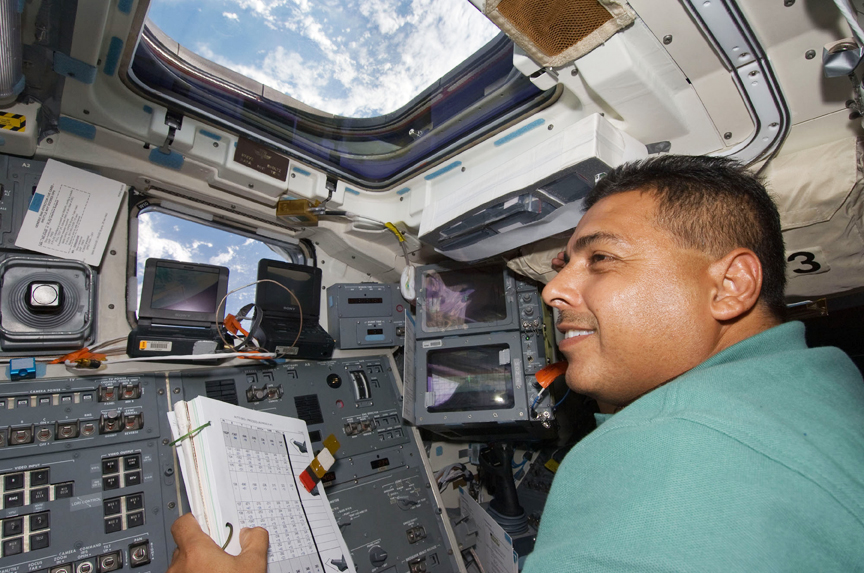 Sitting in his office in downtown Stockton, CA, 52-year-old José Hernández remembered the dream he had when he was 10: to be an astronaut.

He processed that dream while holding the rabbit ears antenna to his family’s TV so that others could see the live broadcast of the Apollo 17 mission in 1972. When he was allowed to let go of the antenna, he walked outside and gazed at the moon. He made his way inside and again saw the moon on the TV screen. Little José repeated that several times and reached the conclusion that he wanted to travel into space when he grew up.

“For me it was amazing that I could see the moon, a quarter of a million miles away, and the astronaut walking [on the Moon] and talking to ‘Mission Control’ live,” Hernández said, recalling how Walter Cronkite recounted what astronaut Eugene Cernan was doing. “That fascinated me and I said, ‘This is what I want to do.’”

From farmworker to NASA engineer

The story of Hernandez, who was born to Mexican immigrants from La Piedad, Michoacan, in French Camp near Stockton, is full of contrasts. He worked in the fields as a child beside his parents and three brothers in various fruit and vegetable harvests in California.

Hernández recalled the conversation he had with his father the day he revealed his dreams of being an astronaut. First, Don Salvador sat him down in the kitchen for a “man to man” talk.

“At that moment, when he said ‘the kitchen,’ I got scared,” confessed Hernández. The kitchen was the place where—in addition to doing homework under the supervision of his mother Julia—”justice was applied” when children misbehaved.

“Why do you want to be an astronaut?” Salvador asked his son. Hernandez spoke of the fascination inspired by the live broadcast of the moonwalk.

“I think you can do it. Moreover, I will share a recipe of five ingredients, very simple ones. If you follow them to the letter, I promise you can reach your dream,” said his father, who never studied beyond the third grade.
The recipe included: defining what you want to be in life; recognizing how far you are from that goal; creating a map route; studying; and effort.

The first ingredient was easy. For the second one, Hernández thought, “we can’t be any further; we’re farmworkers.” But the fifth was the most important.

“The effort that you put in when you’re in the field on Saturdays and Sundays and seven days a week in the summer, when you’re harvesting cucumber, tomato, onions, peaches, cherries, grapes—that same effort you have to put into your studies now, and later in your work,” his father said. “Always, always, always deliver more than what people expect of you. Mix all of that, son, and that’s the recipe for success in life.”

Hernández’s road to NASA wasn’t easy; he was rejected 11 times before finally being hired as an engineer. After one of these rejections, he thought of “throwing in the towel,” but his wife Adela told him that if he didn’t try again, he would experience a lifetime of doubt.

After about five years of receiving rejection letters, Hernández asked himself, “What do they have that I don’t?”
Hernandez took a pilot course, then a diving one, and even learned Russian—things all successful candidates had to do.

In May 2004, Hernández, who hadn’t learned to speak English until the age of 12, finally achieved his dream of becoming an astronaut, and in 2009 boarded the space shuttle Discovery. On that mission he made history through a tweet, becoming the first person to use the Spanish language from space.

Awakening from the dream

Despite the joy of being an astronaut, Hernández confessed that working at NASA had its limitations. After exploring space aboard Discovery, he was invited to various places—especially in Mexico—giving motivational speeches where he told his moving story. But the space agency wouldn’t let him travel very often, or allow him to work on personal projects.

When he pitched the idea of writing a book to inspire future generations, NASA turned him down because it would be “for profit.” He suggested donating all of the proceeds, but they didn’t go for that either.

So in deciding what his next step would be, Hernandez opted to leave NASA.

He now runs a company called “Tierra Luna,” the same name of the Mexican restaurant he owned when he lived in Texas. With his engineering studies and experience as an astronaut, Hernandez provides technical advice to governments, like Mexico, on issues such as the purchase and maintenance of communications satellites. He’s also written a book called “Reaching for the Stars” and there are talks of making his story into a movie.

But none of that would be possible if Hernandez hadn’t heeded his father’s advice. After a long and tiring day of harvesting cucumber, Salvador told his sons to remember that moment, because a lifetime of working in the field could be in their future if they didn’t study.

“At that moment, I loved school.”