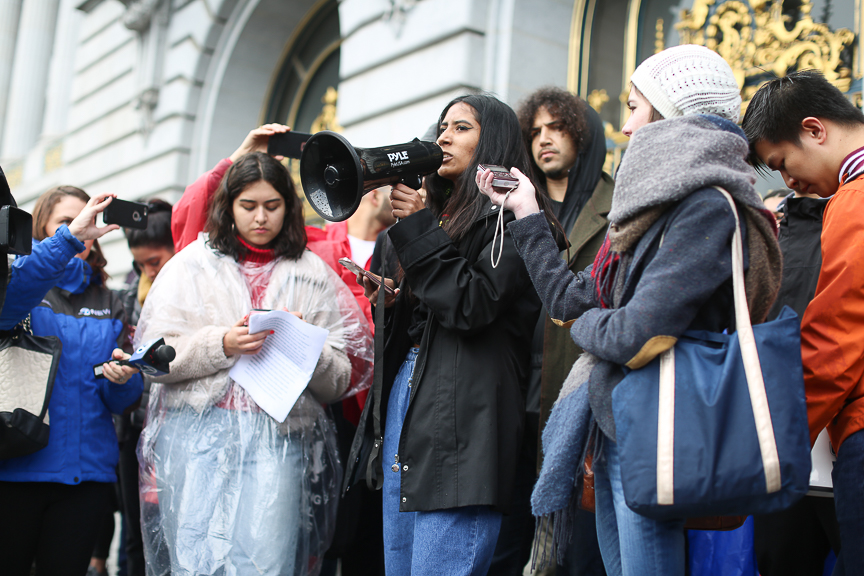 A demonstration led by hundreds of San Francisco high school students flooded the steps of City Hall on March 14, as a part of a nation-wide “walk out” to demand stricter gun regulations and an end gun violence.

The event, which included students from Gateway, Galileo, Lowell, Academy, Washington, Lincoln, Marshall, Wallenberg and John O’Connell schools, was organized entirely by youth. The students held the initial rally at City Hall, but then the mass of unapologetic youth marched down Market Street to the Embarcadero before finally reaching Maritime Garden.

One of the young facilitators of the event, Guadalupe Cisneros, 17, said she got involved because she didn’t see anyone taking initiative in creating this event and thought it was necessary for San Francisco’s youth to take part in the national conversation about guns in school.

“You don’t have to be older to know what’s happening,” said Cisneros, who also aims to raise awareness on the gun violence she sees in her community.

“San Francisco’s Brown and Black youth witness this gun violence in their lifetimes so many times that we almost normalize it,” said Cisneros. “So now, that this matter has finally gotten awareness and youth are finally becoming empowered to speak up, we have to use this moment to let everyone know of the everyday realities that we see in minority communities and that a lot of times does not get the attention it deserves. “

Cisneros said that the event was originally supposed to only last for 17 minutes, to honor the 17 victims from Parkland school shooting in Florida, and that it was supposed to take place in individual high schools. But she and other youth who helped organize this event felt that 17 minutes wasn’t enough.

These young activist also felt that speaking in front of a place filled with many people in positions in power would allow their voice to be heard and not ignored.

Two Supervisors, Malia Cohen of District 10 and Sandra Lee Fewer from District 1, attended the demonstration in support of the youth activism.

Supervisor Cohen also talked about gun violence that communities of color face daily, but also told the crowd that their voices, and everyone’s voices, needed to be heard regardless of their race or ethnicity.

“This is not a Black or White issue, this is a youth issue,” said Cohen

Supervisor Fewer emphasized the importance of youth being political engaged and expressed concern over the low number of youth who voted in 2016.

“The average voting age was 46,” said Fewer. “We need to nurture and encourage youth’s behavior seen today and guide them to voting polls.”

Even with the support of two supervisors, Cisneros said City Hall’s staff tried to crowd control their event by giving the organizers ultimatums that would have restricted their access to equipment they needed for the demonstration.

“Staff in City Hall said that if we wanted equipment like microphones, podiums, etc., we needed to have a rally inside with less people and less posters.”

Cisneros also said that her school, and all of the other schools involved, did not allow them to promote this event at their campuses.

“They said it was because they did not want it to disrupt school for other students,” Cisneros said. “We tried emailing teachers from other schools to build allies, but not all of them were responding back.”

Friends of Cisneros from other schools told her that their schools had threatened to not let them walk across the stage at their senior graduation ceremony if they attended the event.

The San Francisco Unified School District issued a statement saying they were aware of the planned walkouts and that they “are working closely with our principals and other school leaders to ensure they are supported in allowing students and staff to exercise their right to free speech.”

“If a student walkout or protest happens, school staff are advised to allow the students to peacefully protest. If students leave the classroom/school (walk out), staff must mark the student down for an unexcused tardy or absence,” the statement continued. “School administrators and local law enforcement will deploy resources to support student safety. Additionally, SFUSD will do our best to inform students’ guardians in a timely manner if a student is not in school.”

Although Cisneros and other youth activists didn’t receive a permit to march down to their original final destination at the Embarcadero, the crowd of concerned students triumphantly marched all the way to Maritime Garden.

Chants of “Hey hey NRA, how many kids have you killed today,” and “We are change,” rang from the crowd.

Residents mostly responded positively, honking and high-fiving students. But there were a few, like Frank Bukhari, 29, who kept screaming “wake up” to the student protesters at the Embarcadero.

“They are just being brainwashed by what they see in television,” said Bukhari. “They are so young and naïve to understand how they are being used.”

Cisneros said that she felt amazing with the hundreds of students who turned out and showed support. She said that she is grateful to be “finally able to express the oppression she and her community faces in the United States.”

“It’s really sad to what happened to the students at Parkland,” she said. “But now we have a voice through them that could possibly bring awareness to the other ways gun violence affects our neighborhoods and other versions of gun violence, like police brutality.”