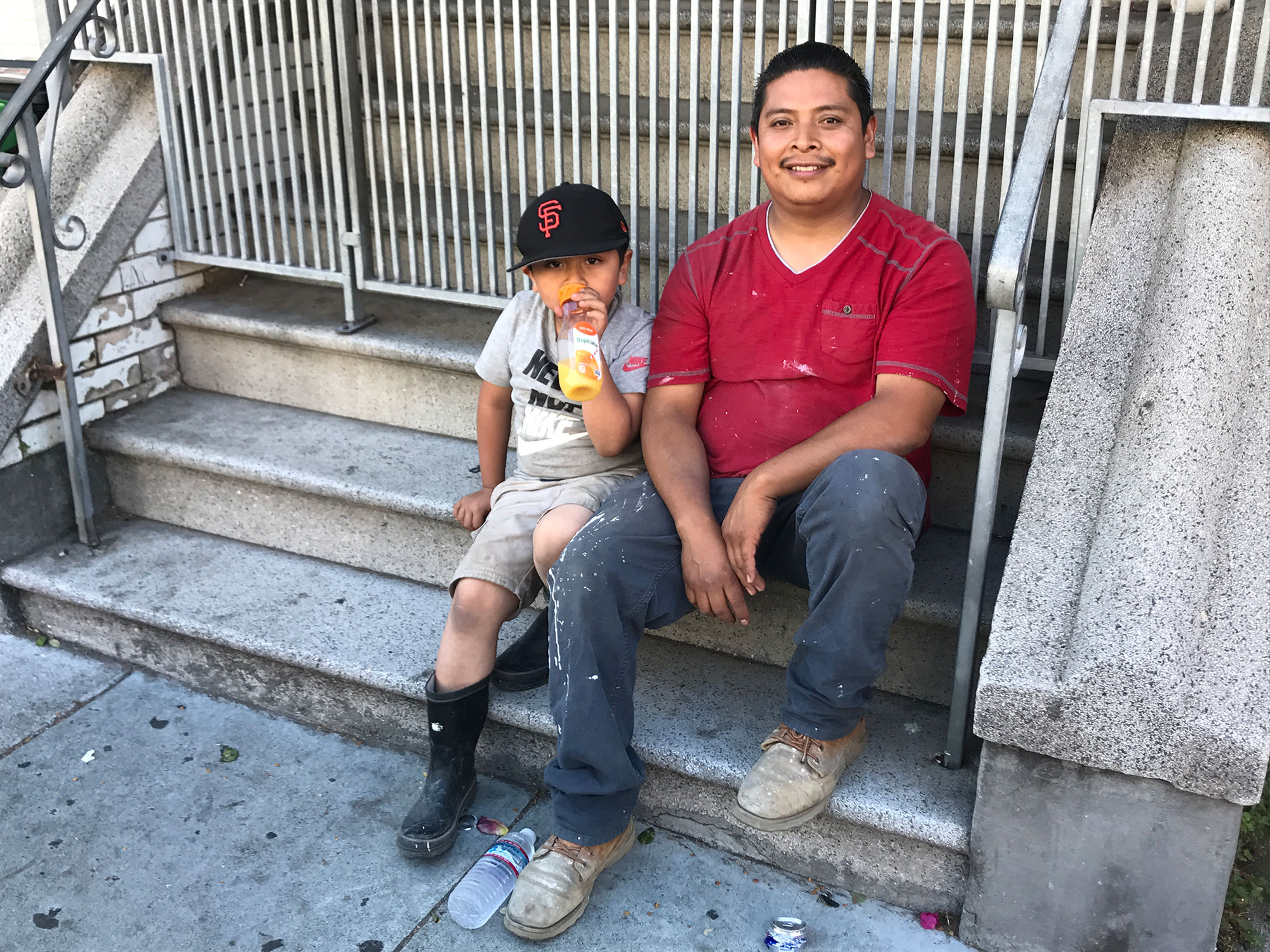 Editor’s note: This is the second part of a look at tech disruption in the Mission District and the level of effort and concern that some big companies in the industry have shown in alleviating the impact of their growth, especially when it comes to the most critical problem they have wrought – the lessening availability of affordable housing.

When it comes to the billions in tech philanthropy distributed worldwide in recent years, the amount that has specifically been directed to alleviate the displacement it has spawned in San Francisco and the Mission has been fairly minimal – especially when it comes to housing, according to an analysis of the industry’s publicly-available listings.

And when it comes to tech displacement from the Mission, perhaps no company has been vilified as much as Google.

The company’s massive white buses with the luxury leather seats that take up public space to transport its private workforce have come to symbolize the industry’s apartness from the community. As such, they have become the target of community protests where residents and activists have singled out the vehicles from one of the leading companies in the industry that proudly thrives on disruption.

“There is very little consciousness being displayed by the dot com community in addressing the woes that these families are experiencing as a direct result of their moving into our community,” said Santiago “Sam” Ruiz, the executive director of Mission Neighborhood Centers, who is in the midst of a campaign to raise money to fund four new early-childhood education and care centers in the district.

With 45,000 employees in the Bay Area, including 1,500 who work in San Francisco and an untold thousands who live in the city but work down the Peninsula, Google stands at the forefront of the industry that has blessed the bank accounts of its beneficiaries and become the bane of a population that is fighting to hold ground in the neighborhood where its story has been told for generations.

Google, for its part, is not oblivious to the wrenching change its huge growth has wrought on its surrounding Bay Area neighbors since the company was founded in 1998. And, a spokesman for the company countered, it has tried to help, and it is willing to help more. According to the spokesman, over the past five years Google has bestowed $18 million in grants for homeless programs in the Bay Area, including $3 million to launch the Bryant Street Navigation Center, south of Market.

This year, Google—with 45,000 employees living in the Bay Area—made a $1 billion commitment toward building new housing in the region. The company said that $750 million of the sum will go toward projects for its employees in the San Jose and Mountain View area. Another $250 million chunk has been slated for affordable housing production around the bay, which included a recent $50 million grant to the Silicon Valley TECH (Tech+Equity+Community+Housing) Fund.

None of it, however, has been specifically earmarked for San Francisco, let alone to the Mission District.

Ruiz said a Google representative gave him the cold shoulder when he contacted the company about the Mission Neighborhood Centers capital campaign for the ECE centers – a program designed to anchor Latinos into the community’s future.

“Don’t they understand the gravity of the situation—the crisis they’ve created?” Ruiz asked. “They can’t say they’ve already gave. Their attitude should be, how can we partner?”

Over the past decade, Google and its tech bros have pretty much turned San Francisco into a reverse suburb, a bedroom community for employees who work down the peninsula.

According to U.S. Department of Census estimates, there were 115,663 San Francisco workers in 2017 who left the city every day to go to work, a little more than 60 percent of them down Silicon Valley way. That number is a 27 percent increase from the 85,932 who made such commutes in 2005.

Tech disruption is something that is felt by pretty much everybody in the neighborhood.

At Ernesto’s Hair Salon on Mission Street, proprietor Ernesto Cavello said that a rent hike at his old shop forced him to move to his current spot. Cavello said his lease is up next year. He fears another rent increase that could force him all the way out of the neighborhood.

“I see the change when the tech people come to San Francisco,” Cavello said. “I’m okay with cities growing, but I don’t agree when the rent is coming up. Now, the owners of the buildings, they are only looking for the money, not the people.”

Jose Pablo, 32, sat on the stoop of his apartment building on Capp Street where he is paying $500 more for rent than he did when he moved in 10 years ago – a major crimp on the wages he earns as a painter and construction worker.

“I think the only reason people are moving out is the rent is so high now,” Jose said. “They just keep raising the rent every year, so people like us who are not getting much money, we can’t afford it because it’s so high. We just keep going, because there is no choice.”

In colorful Clarion Alley, tourists by the hundreds stroll between Mission and Valencia streets to take in the stunning array of murals. The visiting artist Saul Sanchez Barojas lamented the changes that have racked the neighborhood over the past 20 years which have forced him to move back to his native Veracruz, in Mexico.

“People that lived here, they came not to get rich, but just to get by, but the rich came here and kicked them out,” Sanchez said. “Now we’re in big trouble, because everything is so expensive. We are losing ground here.”

Theresa Pasión, the co-owner of La Palma Mexica-tessen on 24th Street at Florida, told her story of how her business has changed in recent years.

“I used to do a lot of weddings, quinceañeras, baptisms,” she said. “Now, it’s ‘We’re having a going away party because we’re leaving.’ I’ve never done going away parties the way I am now.”

Incrementally, with a groundbreaking here and a city approval to purchase land for affordable housing there, advocates battle to keep the Mission from becoming a museum piece. They’ve successfully stood up to gentrification-accelerating proposals, and they’ve partnered with the city to get 1,150 affordable housing units into the Mission construction pipeline, according to the activist Roberto Hernandez.

“Our goal is to build 2,400 units so that everybody who has been evicted has an opportunity to come back,” Hernandez said. “So we’re short 1,250. We’ve bought the land, and we’ve got the money for construction, but it’s been a very slow pace.

But some help from tech may finally be on the way.

The Silicon Valley Community Foundation listed only $1.5 million in giving to San Francisco housing and transportation causes since 2015, although more funding likely went to housing programs in the $23.5 million it gave to the San Francisco Foundation and the $7.3 million that went to other nonprofits provide homeless and affordable housing services, according to the SVCF grant calculator.

Early this year, the San Francisco Foundation was named as a critical supporter of the Partnership for the Bay’s Future that includes a proposed $500 million effort to build and preserve affordable housing in the Bay Area. The Chan Zuckerberg Initiative, founded by Facebook’s Mark Zuckerberg and his wife, Priscilla Chan, heads up the list of tech partners. The SFF will administer the partnership’s policy fund and grant program with a stated goal to “support initiatives with a strong focus on strengthening low-income tenant protections.”

Ruiz credits the SFF with being “one of the few (charities) nationally that lives up to its agenda” and one that “still has some ways to go, but is going in the right direction” when it comes to the Mission District and doing something to ease the tech/housing crunch that is forcing people out of the neighborhood.

Mission Neighborhood Centers, for its part, thinks that the early-childhood education component is a crucial link between that affordable housing and a Latino future for the Mission District. The agency already has commitments for more than half of the $14 million goal, although little of it from the tech industry, for a program to keep a population afloat in a high sea of tech money that threatens what’s left of the Mission-as-they-knew it.

“You can’t control the real estate market,” said Jim Gonzalez, a former San Francisco supervisor and now a political consultant in Sacramento who is advising the Mission Neighborhood Centers. “But you can control what Latino families need to survive and thrive in the Mission District.”