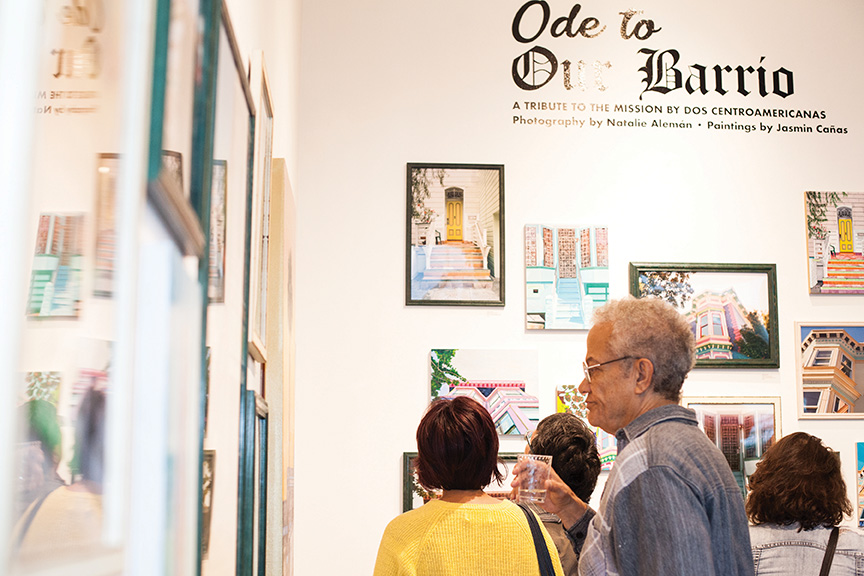 Over the past couple years, artists Natalie Alemán and Jasmin Cañas have used their photos and paintings to capture the distinctive culture that makes the Mission District one of the most unique neighborhoods in the country. Their new collaborative exhibition “Ode to Our Barrio: A Tribute to the Mission District in Painting & Photography” is the successful culmination of their efforts.

The exhibition, which opened Sept. 1 at the Juan R. Fuentes Gallery and will run through Oct. 30, focuses on the people, colors and traditions that have made the Mission’s culture iconic, even as the neighborhood has experienced rapid change in recent years. Alemán and Cañas wanted to show their community that despite all of the changes, the neighborhood is still home.

Both artists were born and raised in the Mission District and both know first-hand the kind of struggles that have faced the community in the past and in the present. They hope to use the exhibition as a way to display the strength and perseverance of the people who have called this neighborhood home.

Although she is disappointed to see her how childhood neighborhood has changed, Alemán said she sees hope in longtime residents who have refused to move. She believes that their struggles illustrate just how strong and resilient they are.

“There are a lot us still here, and I’m hopeful that we can hang on to the remaining bits of the original Mission,” Cañas said.

“Ode To Our Barrio” grew from the artists’ mutual appreciation of each other’s work. Cañas said she really appreciated the way that Alemán portrayed the Mission in her photos, and Alemán enjoyed the detail and color that Cañas used in her paintings. Both had discussed some ideas and they eventually decided on highlighting their community and its culture.

“I approached her and asked her if I could paint some of her photography,” Cañas explained, “I really was inspired by how she was capturing the Mission in a lighter way.”

In early 2017 they were approached by Acción Latina Executive Director Josué Rojas, and were offered the space at the Juan R. Fuentes Gallery to host their show. Alemán explained that Rojas was already familiar with their work as individuals and thought the two would work well together for a show.

“It was really crazy how naturally everything had come together,” Alemán said, “It was all kind of just serendipity.”

Being able to hold their exhibition in a space that they knew well and respected was another part of the duo’s vision. Cañas hopes that viewers will be able to take everything in and see her home the way she does.

“There’s no other place like the Mission, and I feel like people should see that when they see the collection.”

“Ode to Our Barrio: A Tribute to the Mission District in Painting & Photography” is exhibiting now until Oct. 30 in Acción Latina’s Juan R. Fuentes Gallery at 2958 24th St., San Francisco. Gallery hours are Tuesday through Friday, 11 a.m. to 5 p.m.

‘Mad for the Mission’: Ted Pushinsky talks documenting the Mission over 30 years