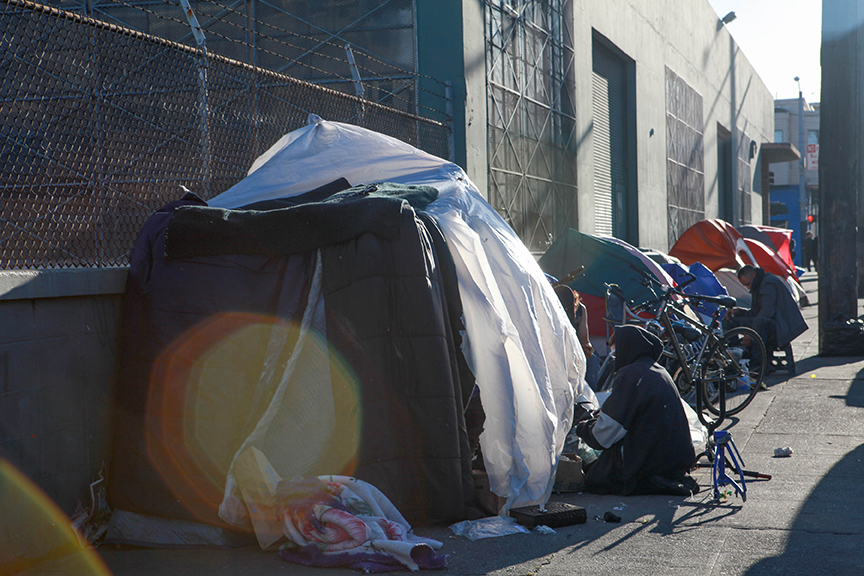 An April 24 town hall meeting left the Mission community flustered and divided over the controversial, proposed homeless “navigation center” at 1515 South Van Ness Ave., which is set to open around June 1.

The event, which was held at the Mission Cultural Center for Latino Arts (MCCLA), attracted more than 200 people, the crowd spilling out the door into the street. The center will take a low-barrier, low-threshold approach (meaning a minimal demand on clients) in helping guide some of San Francisco’s most vulnerable residents out of homelessness by providing resources, such as 120 beds with accessible showers and 24-hour staffing.

District 9 Supervisor Hillary Ronen, who supports the project, held the meeting as a response to what she is calling an emergency public health crisis. Last November, voters passed Proposition Q, which prohibits tent encampments on public sidewalks and requires the city of San Francisco to offer temporary shelter before removing tents.

“The tension around this issue that homeless people are barely surviving on these streets and residents who feel like the city has not done a good job of addressing this crisis is at a peaking point,” Ronen said.

According to the Department of Homelessness and Supportive Housing, there are more than 4,000 people living on the streets of San Francisco and an additional 3,000 who are sheltered. Approximately 900 of the unsheltered homeless are in tent encampments throughout the city, and about 300 live in the Mission.

This will be the second navigation center built in the Mission District; former District 9 Supervisor David Campos first introduced the measure last year, which established one on Mission Street near the 16th Street BART station.

Many nearby residents, a majority of whom are small business owners, disapprove of the proposed navigation center, calling it “unfair” and saying the Mission is at the frontline of the homeless crisis. Other residents held signs in opposition of the center, some of which read “the Mission is not a dumping ground.”

“I can’t even give them water anymore because they come there and they destroy my business,” said German Matias during public comment at the town hall. Matias is the owner of Rincon Nayarit, which is located across the street from the proposed navigation center. “I worked hard for this business, I mean it’s $200,000 I invested. To most people it’s nothing, but for me it’s half of my life. And honestly I don’t want it to see it vanish from my hands.”

But other business owners were in full support of the navigation center.

City College of San Francisco Trustee Tom Temprano, who was at the meeting, co-owns Virgil’s Sea Room bar, which is a couple blocks away from the site.

“The situation in the Mission is out of control. It is unlivable for homeless folks who are forced to live there without services,” Temprano said. “It’s unlivable for neighbors, who everyday are having to step over them to get to their homes. I understand, but I disagree with the solution to solving this problem is to continue to do nothing.”

“If It’s a band-aid, I’ll take a band-aid over nothing and making it worse,” Temprano continued.

Tensions began to flare at the meeting, with most of the frustrations being directed toward those opposing of the project. Some supporters of the project would either nod their heads or interrupt in disagreement every time someone would criticize the navigation center.

A Facebook group called “Protect the Mission,” which opposes the project, created an event page to promote the townhall discussion, but no one attending the meeting came forward as a member or representative of the group. Neither the Facebook page nor the group’s official website provide names of a director or any of its organizers. El Tecolote attempted to contact Protect the Mission, but was unable to get a response in time for print.

According to Protect the Mission’s Facebook page, the group wants to “prevent another temporary homeless center set up in the Mission by the city in a residential area near three schools,” claiming that the shelters are “ineffective, bringing crime and drug abuse.”

Ronen addressed safety concerns and announced that there will be enhanced police enforcement on the streets. The crowd booed that solution, given the mistrust between the community and the SFPD.

Blanca Trujillo, a mother who opposes the project, said she was concerned about her children.

“We all have the right to live in a safe place. I live right at that area. My children need to be concerned about their studies, not about what’s going on in that area.”

The $2.5 million navigation center’s temporary run will last between six to eight months. Both supporters and opponents of the project were concerned that too much money is being invested in a temporary solution.

Jordan Davis, a navigation center alum, disagrees with those who oppose the center. Davis lived at the first navigation center on Mission Street for nearly six months and worked closely with her case manager, something most homeless shelters lack.

“Homeless shelters was like a prison—a halfway house,” Davis said. “It had curfew and restrictions to go get your meds, it took a long time to get meds. The navigation center was more open air, you can go and get meals, take meds. They treated me like a human being.”

Another town hall meeting is planned for 6 p.m. on Thursday, May 4 at John O’Connell High School.