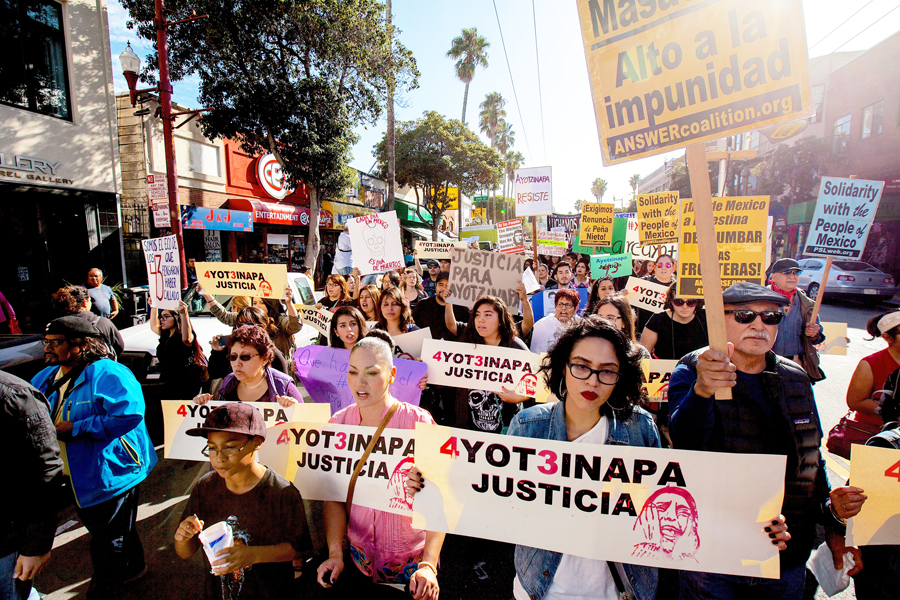 City College’s fate to be decided

“Mexico is kidnapped,” read one of the most striking banners that demonstrators held on Saturday, Nov. 15, at a rally at 24th and Mission streets to show solidarity with the 43 students from the escuela Normal Rural Raúl Isidro Burgos in Ayotzinapa, Guerrero, Mexico who went missing on Sept. 26.

The banner, created by the Oaxacan-born Giovanni Rodriguez, portrays a woman, blindfolded and gagged. The artist, through this brutal image, decided to portray present day Mexico.

“I put ‘Mexico is kidnapped’ for many reasons: the bad government, the injustices for these same people, and for the system that is killing us slowly,” Rodriguez said. “I don’t know what will happen regarding the matter of the students. I don’t know if we’ll find them, but it’s definitely something that has sparked uproar among the people. They’re waking up. And I hope this movement doesn’t falter, and that it continues.”

The San Francisco rally was one of many that have been held in the U.S. and in Mexico since Sept. 26 demanding justice for the young men that vanished that day. According to Mexican federal authorities, the students could be dead but remain classified as missing, as no remains have been found. According to reports from the Mexican government, the young people were attacked on orders of the mayor of Iguala, José Luis Abarca, and his wife, María de los Ángeles Pineda Villa, in collusion with local police and organized crime groups.

Most of the San Francisco protesters believed that the 43 missing young men are dead, but still don’t trust the researched results that were recently revealed by Mexico Attorney General Jesús Murillo Karam. According to Murillo Karam the students were killed and had their corpses burned in a dumpster near Cocula.

“It’s been too long. I don’t believe what Murillo Karam said, because it’s impossible; it was raining that night,” said Jenny Freeman, who attended the demonstration alongside her daughters and husband. “But I don’t think they are alive.”

Lack of confidence in Murillo Karam was accentuated at the end of a recent press conference during which he gave details of the investigation. The prosecutor muttered, “I’ve had enough,” at the end of the press conference, sparking outrage from many people who expressed their dissatisfaction through social media.

There were also several signs on display demanding the resignation of Peña Nieto.

“That would not be the solution, but it would be symbolic,” said Freeman, who along with her Mexican husband studied at the National Autonomous University of Mexico. “The solution would be to clean up impunity.”

After the rally in front of the 24th Bart Street plaza, demonstrators began marching along Mission Street.
“Ayotzinapa lives, the fight continues, continues,” chanted protesters. “Alive they were taken, alive we want them returned.”

The march continued from the Mission District to the busy intersection of Market and Powell streets.

Sara Nieto attended the protest with her nine-month-old daughter.

“The rest of the world must also support the people of Mexico,” she said.

Asked why she decided to attend with her little girl, Nieto said: “Because in the future it could be her or me.”
More protests are being planned throughout the Bay Area and Mexico.

Neither pardon nor forgiveness