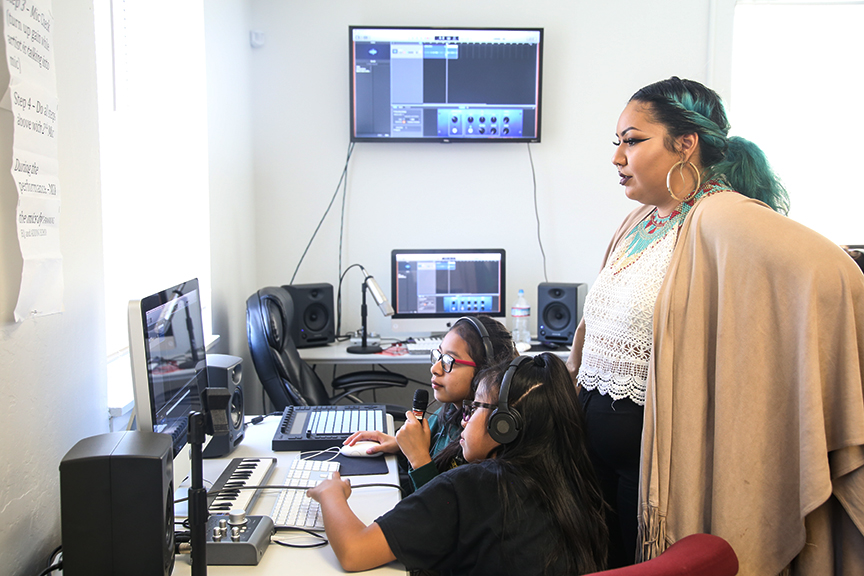 Fifteen years ago Terri Winston recognized a great disparity in the number of women working in the audio industry.

Utilizing her background as director of Sound Recording Arts at the City College of San Francisco (CCSF), she set out to carve a space for women in the male-dominated industry of audio engineering and production, and in 2003 she founded Women’s Audio Mission (WAM).

As a nonprofit that uses music and media to help prepare women for careers in audio and STEM, with a professional recording studio built and operated entirely by women, WAM is the only organization of its kind.

It has developed a revolutionary curriculum with a professional staff that has engineered programs geared toward the empowerment of women and girls, who often come from underserved communities.

WAM offers participants a multi-dimensional experience learning audio production through its “Girls on the Mic” after-school mentoring program. At Girls on the Mic, young women ages 11-18 receive free digital media production training, learning the skills to express themselves through audio. WAM also offers internship opportunities and sound engineering classes for adults, which have recently been made accessible through an online platform called Soundchannel.org—all with a goal to reframe audio arts and STEM as an industry that is within reach to any woman or girl with a passion for sound.

“Why isn’t there more women in the audio industry?” asks Victoria Fajardo, Girls on the Mic instructor, WAM program coordinator and staff engineer. “These careers of audio and STEM are not introduced to us as much as they are to young boys. [At WAM] everyone genuinely wants to see you do good..and that’s so comforting.”

Fajardo’s sentiments were echoed by Girls on the Mic instructor, program coordinator and staff engineer Jayme Brown, who reflected on her initial experience in the audio industry.

“There would be moments where guys in my class would ask questions that seemed way advanced and above and beyond what we were learning—almost like the guys had this hidden language,” Brown remembered. “STEM was always something that felt very male-dominated. Young men and boys were more encouraged to pursue STEM than women were. To have the opportunity to introduce STEM in this way, through this medium and encourage young girls to open their eyes to thinking about STEM in a way they haven’t thought of before, is pretty much something we get to do every day.”

WAM is driven by the fact that women account for less than five percent of those working in the industry. Opportunities at WAM have lead to the employment of more than 500 women in paid audio industry positions, and WAM has held over 12,000 classes at their headquarters in San Francisco and Oakland.

“Every venue in San Francisco right now—like The Chapel, The Make Out Room, El Rio, all of the major [venues]—we have a [past-intern] in each one,” said Fajardo. “If there is a woman there, they probably went through WAM.”

Yet, there is still work to be done in regards to the dynamic of women in this industry.

Katie Fahey, WAM’s associate director since 2017, has more than a decade’s worth of experience in the industry. She points out a peculiar dilemma in the Bay Area.

“[The program’s success has] almost given the perception that the problem doesn’t exist anymore, because we’ve been really effective in that regard,” Fahey said. “Then it comes to a jarring head in certain moments where you find yourself in a room where only men are working. Even at our own shows we’ve had people come up to our sound person Kelly and say, ‘I’m looking for the sound guy.’ For which she replies, ‘I am the sound guy.’”

It’s instances like these that make the work WAM does with young girls so crucial to the future of audio arts. Fajardo said that WAM serves predominantly underserved schools and that Black and Brown youth are always getting told their voices “don’t matter.” Because of the safe and encouraging space that WAM cultivates, young girls leave WAM with renewed confidence in themselves and in their peers.

“Homegirlisms are so important when building community,” Fajardo said.

As WAM reflects on their 15 years of trailblazing success, one can’t help but wonder what might be next for WAM.

“One of the most exciting things that’s happening right now is that [WAM] has all of these opportunities to expand nationally,” Fahey said. WAM has begun to launch WAMcon, a recording arts conference that offers audio arts workshops to women outside of the Bay Area.

As WAM continues to connect women and girls with audio arts in the Bay Area and internationally, they will celebrate the substantial impact that WAM has achieved and continue to recognize the importance of equity in this industry.