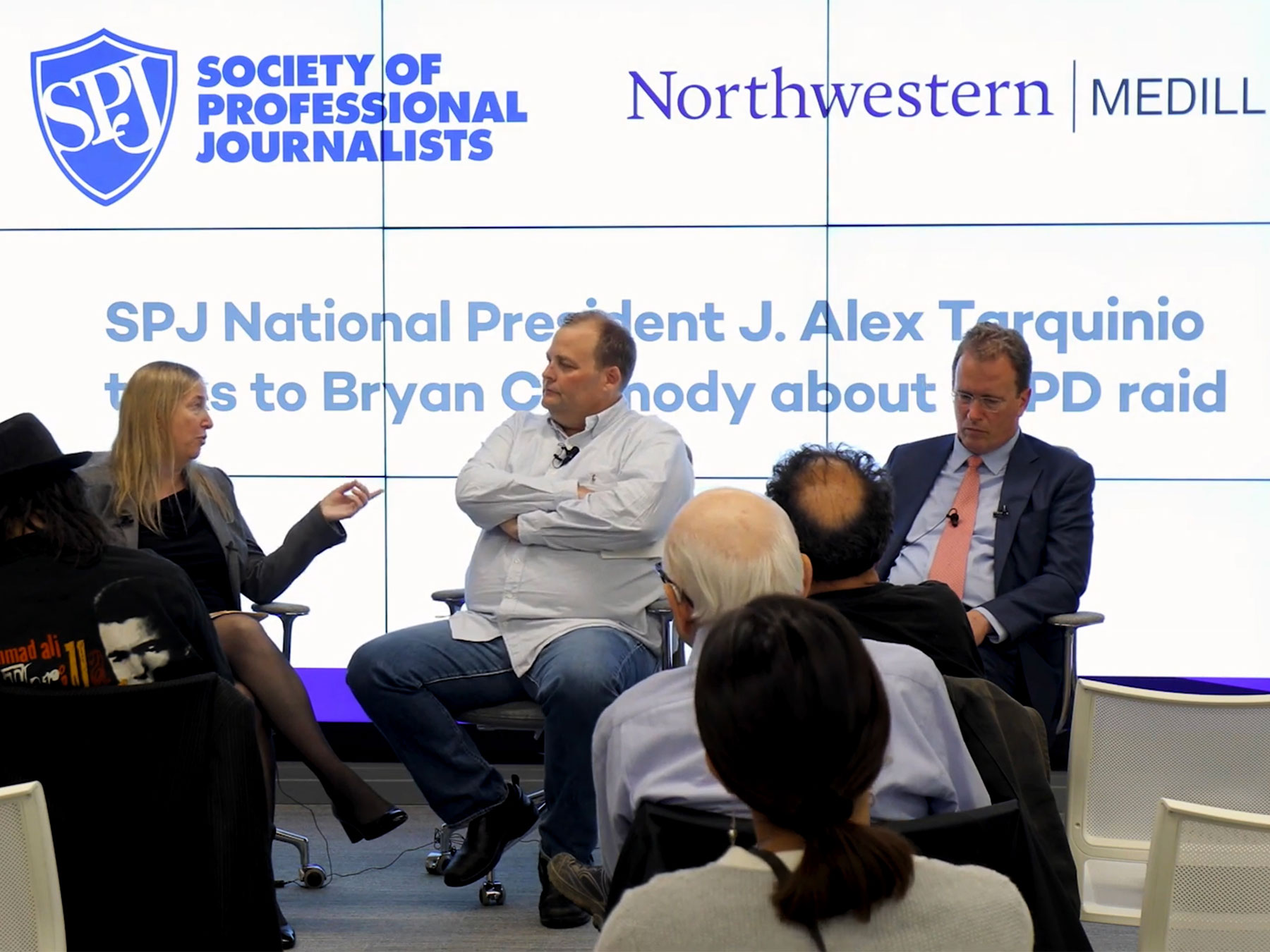 Months after having his home and newsroom raided by police, freelance journalist Bryan Carmody spoke publicly for the first time about being the target of an SFPD criminal investigation that sought to uncover the source responsible for providing him with a confidential police report pertaining to the death San Francisco Public Defender Jeff Adachi on Feb. 22, 2019.

During a Q&A event at San Francisco’s Northwestern University’s Medill School of Journalism on Aug. 13, Society of Professional Journalists (SPJ) national president J. Alex Tarquinio interviewed Carmody—who has worked as a journalist in San Francisco for almost 30 years—and his attorney, Thomas Burke, about Carmody’s refusal to disclose the identity of his confidential source, the consequential raid, and the legality of the warrants that authorized it.

“Getting woken up with somebody pounding on your metal gate with a sledgehammer was not a great experience,” Carmody said of the early morning raid on May 10, adding that though it did not come as a complete surprise, “It was a jarring wake up.”

Prior to the raid, a San Francisco Board of Supervisors meeting had been called to discuss the leak, as the confidential report contained information about the fact that cocaine had been found in Adachi’s system at the time of his death and that he had spent the evening with a woman that was not his wife, in an apartment that was not his own. Many saw the report’s unauthorized release as a purposeful action by the SFPD to tarnish the name of Adachi, a vocal critic of police.

At the meeting, which was held on April 19, Adachi’s widow, Mutsu Adachi, read a statement, saying the fact that the report was released 12 hours after her husband’s death “had been incredibly painful” and she felt it was “despicable” what SFPD had done.

SFPD’s acting captain, William Braconi, and Police Commander Greg McEachern, offered an apology to Adachi’s widow and told supervisors that investigators were “working tirelessly” to find those responsible for the leak.  Still they were strongly criticized by 10 of the 11 supervisors who called the meeting to session, as they saw the release as a sign that there was an inability within the department to control the flow of sensitive information.

“It absolutely erodes the public trust in the police department,” said District 9 Supervisor Hillary Ronen, who also characterized the leak as a “politically motivated attack” on Adachi’s legacy.

For Carmody—a freelance reporter and videographer who makes a living selling newsworthy footage he has filmed and other information to local news outlets—his decision to shop the report around after obtaining a copy “didn’t have anything to do with politics,” he said. “I care what it is, not who it is.”

When speaking about the raid, Carmody explained how he was detained and handcuffed for six hours that morning, as SFPD investigators and FBI agents searched through his home and office, confiscating “every digital photo, every hard drive,” along with all of his camera equipment, computers, phones, all tools which Carmody uses in to conduct his work as a journalist.

Shortly after being released, Carmody quickly informed colleges and other professional journalists of what had occurred. The large public outcry that quickly followed was palpable, as it was understood by many to be a fundamental transgression on behalf of police against the role that journalists play in society.

News of the raid quickly spread throughout the journalistic community and led Burke, a First Amendment Coalition board member and free speech attorney, to representing Carmody.

“Within moments of speaking to Bryan the evening he was detained, I knew that there was absolute immunity for him,” Burke said during the Q&A. Burke also characterized the raid as a failure by the SFPD to recognize the protections afforded to journalists by the California Shield Law, which protects them from having search warrants issued against them in an effort to obtain confidential source information.

During a press conference in May following the raid, SFPD Chief Bill Scott characterized Carmody not as a passive recipient of a leaked report, but rather a “suspect in a criminal conspiracy to steal the confidential report.” Scott added that the department believed Carmody may have  committed numerous crimes, including “receiving stolen property, unlawful dissemination of official information and the willful obstruction of justice.”

During the Q&A, Carmody maintained that he did not conspire to steal the report. “I did not in any way shape or form compensate the officers that were involved in this,” he said. “No money was exchanged, there were no favors, not even a cup of coffee.”

Burke described the accusations made by Scott during that initial press conference as “disturbing” and “a condemnation and a lack of appreciation for what journalists do every day.”

It wasn’t until weeks after the raid that Scott walked back his initial defense of the raid on Carmody’s home and newsroom, and conceded that the case of the leaked report had been mishandled by investigators. In an internal email to his department, Scott wrote: “I am specifically concerned by a lack of due diligence by department investigators in seeking search warrants and appropriately addressing Mr. Carmody’s status as a member of the news media. This has raised important questions about our handling of this case and whether the California shield law was violated.”

Chief Scott’s remarks drew condemnation from the San Francisco Police Officers Association President Tony Montoya who, in a scathing letter to members of the SFPD, called on the chief to resign, writing: “He [Scott] knew every element of the investigation, directed the investigation, knew of Carmody’s press status and has clearly either come down with the most debilitating case of amnesia or is flat out not telling the truth about his direct involvement and the horribly flawed direction he gave to find the leak of the police report.”

Now months after the raid on his home, Carmody and his attorney have been able to get all of the search warrants targeting his newsroom and home quashed by the judges Gail Dekreon, Christopher Hite, Victor Hwang, Rochelle East, the same judges who initially had authorized them. All of them except Judge Hwang stated in the rulings to quash the warrants that they had not been told that Carmody was a journalist. In the final ruling to quash the last warrant targeting Carmody’s cell phone records, Judge East said the warrant “should not have been issued, the fact that he has a press pass from the San Francisco Police Department indicates to this court that he is a journalist.”

Burke argued that the warrants should not have been issued in the first place.

“The reason all the warrants have been quashed is because of the strength of the shield law,” Burke said, adding that Carmody’s case does not reflect “a failing of the law, it’s failing to appreciate that the law absolutely protected Bryan in this instance.”

As part of the conditions to quash the warrants, SFPD investigators must destroy all evidence they gathered from Carmody’s home and office, return the items that were confiscated, and are forbidden to use any of the information they gathered in any criminal or civil proceedings in the future.

Still, the raid has left its mark on Carmody. “My newsroom is still completely dead,” he said. But asked by Tarquino if the raid had affected his ability to work with sources within the department, Carmody responded: “It hasn’t been a problem at all, most of the rank and file have come up to me and said, ‘What they did to you was wrong.’”

Looking beyond at how this has impacted Carmody in particular, Burke is concerned about the dangerous precedent such a raid could have on the ability of journalists across the country to perform their duties.

“That’s the unfortunate outcome of Bryan’s situation,” Burke said. “There will already be people who do not talk to journalists because they saw in San Francisco a journalist had his home raided in an effort to identify a source … If this can happen here, it can happen anywhere else.”