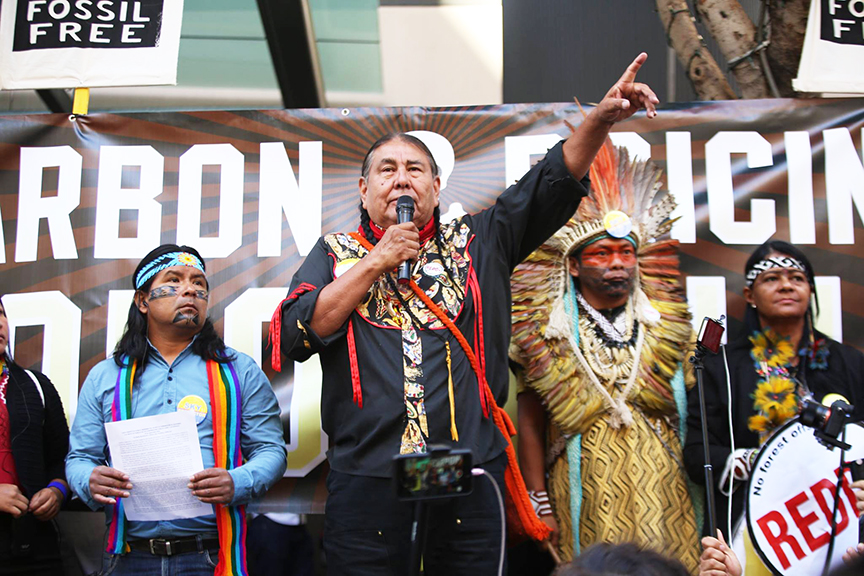 Last week, San Francisco hosted the Global Climate Action Summit (GCAS), where leaders from all over the world including Gov. Jerry Brown met Sept. 12-14 to discuss climate change and solutions.

Also held last week, in direct opposition to the GCAS, was Solidarity to Solutions (Sol2Sol) week. The event was hosted by several community organizations including Climate Justice Alliance, Grassroots Global Justice, Indigenous Environmental Network and Right to the City.

Though the GCAS claims to be an opportunity to find solutions, the groups behind Sol2Sol argue that the summit is nothing more than a chance for corporations to profit off of the earth. They reject “solutions” that involve practices such as selling carbon offsets and designating “conservation areas” in territories that are already protected by the Indigenous people of the region.

The Sol2Sol groups held rallies and events in various parts of the city in an attempt to get their concerns heard. As the week of events went on, tensions began to mount as demonstrators became more vocal and direct with their concerns. Their boldest demonstration came on Thursday, Sept. 13, when activists blocked the entrance to the Moscone Center, where the GCAS was being held.

Hundreds of individuals gathered with signs, picnic chairs, and a symbolic “oil field” with replica oil derricks and pump jacks, all while denying entrance into GCAS at Howard and 3rd streets.

Among the demonstration attendees was Marlon Santi, an activist from Ecuador. Santi helped pen an open letter to Gov. Brown, which voiced concerns with market-based climate control solutions like the Reducing Emissions from Deforestation and Forest Degradation program that allows companies to buy and sell land that activists believe shouldn’t be interfered with in the first place.

“The solution to climate change isn’t to buy and sell carbon credits,” Santi said, “but rather to reach agreements with governments in the south and north that we all need to reduce our carbon emissions.”

Santi added that deforestation of indigenous land shouldn’t be tolerated under any circumstances. He argues, that while carbon credits may sound like a good idea, any solution that allows corporations to continue to pollute and poison the earth is an unjust solution. He also pointed out how these negative effects are not just a danger to the forests of South America, but to our own backyards, in areas like Richmond where oil companies have refineries that are putting residents’ health at risk.

Elijah Oaks, a Santa Rosa native who also attended the Sept. 13 demonstration, shared Santi’s disapproval of the compromises that the GCAS seemed willing to accept.

“Our goal is to get in [the GCAS] and get our voices heard,” Oaks said, “Because what they’re talking about is ‘cap and trade,’ which allows companies and corporations to trade off on how much pollution they can create. It’s really not a solution to climate change at all. We want to show them that we as Indigenous Black and Brown communities have our own solutions.”

Kitzia Esteva, a community rights co-director with Causa Justa, was present at the rally, where she reflected on her own migration to the United States, and how that journey was sparked by environmental racism.

“My nephew got sick with leukemia from a chemical plant that was in my community in Mexico,” Esteva said. “He was a little kid and that’s what forced us to migrate, because we were not going to be able to afford chemotherapy in Mexico.”

One person who took issue with the activists blocking the entrance to the GCAS was politician and businessman Mike Bloomberg, who was recorded saying, “Here we’ve got environmentalists protesting an environmental conference. It reminds me of people who want to build a wall along the Mexican border, to keep people out from a country that we go to for vacations. Something’s crazy here.”

Esteva, and many others, took issue with Bloomberg’s statement.

“He compared us to Trump supporters,” Esteva said. “He’s completely oblivious to who we are. It’s an interesting choice for him to make, when we’re actually people from impacted communities by the possible construction of the border, and when we’re also opposing it.”

Although their message might’ve been lost on some, Santi maintained the importance of movements like Sol2Sol.

“This week has been important in building unity between Indigenous people in the north and the south,” Santi said. “And also to raise the consciousness of elected leadership.”

“We need peace, we need social consciousness, and we need all of us to protect mother earth.”

At the time this article was written, Gov. Brown had not issued a response to the open letter or any of the week’s demonstrations.

Christian environmentalist finds cause to fight climate change in Bible