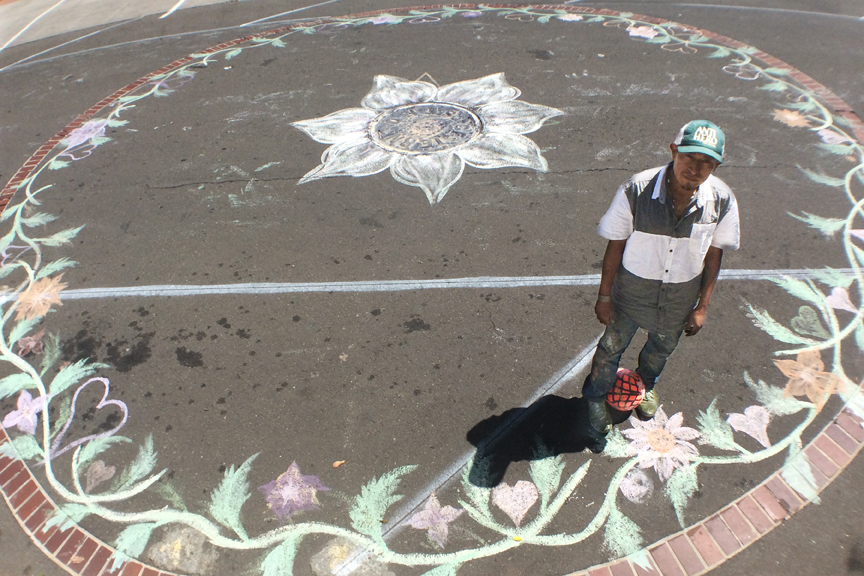 San Francisco’s Mission District is historically home to numerous murals and creative spaces, and artists—many of whom, like Javier Antonio Chab Dzul, live at the margins of society.

Dzul—a Mexican-born homeless man of Mayan ancestry—uses the streets as his canvass, and his paintings don’t just cover a surface, but pain as well.

Follow the painted flowers—sprawled across intersections, side streets and sidewalks decorated in a vibrant combination of colors—and you’ll find Dzul living out of his small tent at 19th and Shotwell streets.

“Do you know what this does for me?” Dzul asked as he touched up one of his flower paintings on the sidewalk. “It distracts me so I don’t have to think about my many problems. That’s why I do it.”

Hailing from Yaxhachén, a little town in the municipality of Oxkutzcab near the Yucatan-Campeche border in southern Mexico, the 40-year-old Dzul left home when he was 13. Raised speaking the ancient Mayan language, he improved his Spanish after moving to Merida, the Yucatan capital. Dzul eventually made his way to San Francisco 16 years ago, leaving two of his children behind.

He’s worked in many San Francisco restaurant kitchens, and even had an apartment at Turk and Hyde streets about nine years ago.

“That’s where we stayed, until I ended up here on the street,” Dzul said. “When they kicked me out of the apartment, it was for not paying rent. But honestly, I [had] sunk pretty low with drugs.”

Dzul said the building was eventually sold, and that he had to break the padlock to his room to retrieve his belongings. He wandered first through Golden Gate Park before finding a home in the encampment on Shotwell Street, making friends and frequently speaking Mayan with Luis Demetrio Gongora Pat. Gongora was fatally shot by two SFPD officers on April 7. Gongora’s family has since filed a claim against the City and County of San Francisco, alleging that the SFPD used excessive force against Gongora.

“That bullet could’ve been for me,” said Dzul, who decorated the spot where Gongora died with painted flowers. “Here in San Francisco, I’ve seen many things. I’ve gotten to know homeless people who are a step closer to death than they are alive, people with pain, with injuries that should be treated. Police and DPW [Department of Public Works] shouldn’t just go removing us, and throwing our things away. They should ask us, ‘Hey, are you OK?’”

Dzul wasn’t always an artist, either.

“I never liked drawing,” Dzul said, whose brother in Mexico was an artist. “I would always observe and try, but I would say, “the hell with it,” and throw it away.”

“I never liked it, but look,” he added, pointing to one of his paintings.

Dzul has been practicing his street art for five years, first becoming inspired by art that was displayed in his former apartment building.

“Many tell me that my paintings are magical. I believe that the magic comes from within us. When you do things from your heart,” Dzul said. “I continue to practice to this day. I don’t feel like a professional.”

“My mind is a little more open when I’m on drugs,” Dzul said.

Dzul smokes methamphetamine in the confines of his tent, so that children don’t see him. Smoking helps him sleep on the street. And it’s good for the hunger, too he said.

The hunger can get to him though. He scouts local cafes for leftover bagels and pan dulce, and rummages through trash bins. But sometimes those table scraps aren’t enough. The thought of stealing an expensive bicycle or smashing a car window have crossed his mind.

“Can you believe that I can’t do it? My friends, they don’t have this problem,” said Dzul. “I go out with that intention, and at times with hunger.”

The urge to look for a laptop sitting in a car and flipping it for $150—a sum that can feed him for a week—is strong. But something tells him not to do it.

Instead, he looks for art supplies that allow him to channel what he calls his “Mayan spirit.”

“Everything that I do, I consider that it comes from them. They built great pyramids and painted numerous beautiful paintings, all done in their way,” Dzul said. “They are gifts, I say, that they give us, gifts that they were given to them by their ancestors. And now I’m here.”