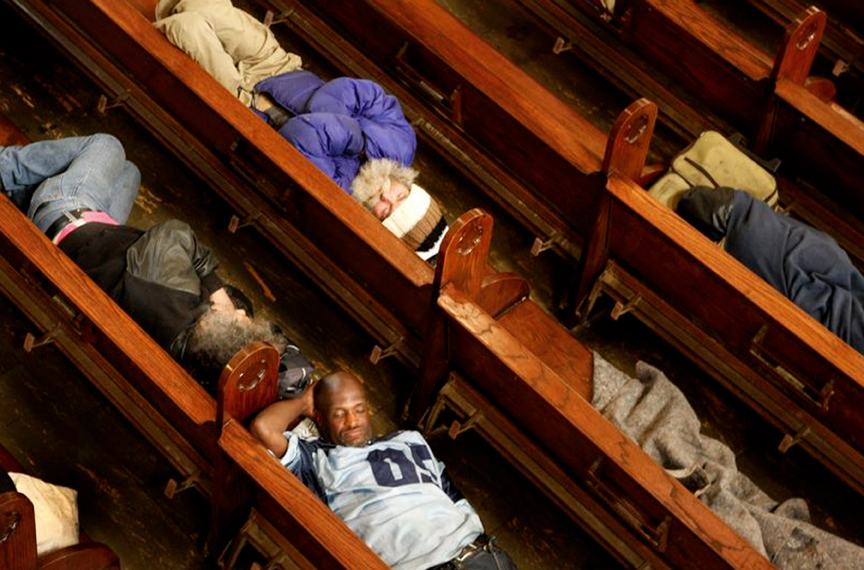 From Capp Street to Potrero Avenue, rows of tarps and tents dot the various streets of the Mission, accompanied by trails of feces and broken glass scattered across the sidewalks.

The numerous homeless encampments—a common sight between 17th and 19th streets on Treat Avenue, Folsom and Shotwell streets—has motivated many community groups, like the Gubbio Project, to find solutions.

The Gubbio Project is an organization that provides the Tenderloin’s homeless community a safe space where they can sleep, stretch out and enjoy moments of solitude.

Founded by Reverend Louis Vitale in April 2004, it was named for the town of Gubbio, Italy, where Saint Francis is said to have ended a conflict between a hungry wolf and the townspeople. As of Dec. 15, Gubbio will offer its services, which include blankets, clothing vouchers, drug free bathrooms and weekly haircuts, in the Mission.

According to the 2015 San Francisco Point-In-Time Homeless survey, the city’s combined street and shelter population was 7,539, including 853 youths. About 3,200 of them are sheltered and the rest are on the street.

Gustavo, who declined to state his last name, has been on the street for almost a year. “I lost my place earlier this year. It’s so expensive,” he said. “I don’t like going to shelters because they are a waste of time with no room.”

Gubbio’s Tenderloin location—St. Boniface Church, located at 133 Golden Gate Ave.—offers its pews for the homeless to sleep on weekdays 6 a.m. – 3 p.m. About 95 guests sleep at the church each day, and most use the project’s toiletries services. Gubbio’s Mission location is St. John the Evangelist Episcopal Church, at 1661 15th Street (between Mission and Valencia streets).

Involving the community
With a staff of only two full-time and four part-time employees, Gubbio relies on volunteers for support.

“We look for volunteers to come in with an open mind,” said Volunteer Coordinator Jose Lopez. “And that are willing to do the accompaniment.”

Gubbio holds orientation on Tuesdays at 12:35 p.m., which includes an introduction on how to get involved. On Dec. 3, Gubbio held a fundraiser called “Blanket Statements,” where comedian W. Kamau Bell performed. All of the proceeds benefited the opening of its Mission District location.

Father Richard Smith—the Vicar at St. John the Evangelist Episcopal Church—first connected with Gubbio when he attended the San Francisco Interfaith Council in September to respond to the overwhelming needs of the homeless. There, Gubbio Executive Director Laura Slattery pitched the project to him.

“We always felt like there was something more we should be doing,” Smith said. “But we didn’t know what it was or know how to do it.”

“I can’t imagine it not working,” Smith said. “I know it’s going to work and I feel very blessed.”

Smith mentioned that this isn’t the first time his church has welcomed a group who have been outcast by society.
During Salvadoran Civil War in the 1980s, many refugees came to the Mission and found refuge in the church. The doors were painted a symbolic red color, which indicated a place of sanctuary.

Gay men also took refuge at the church during the AIDS pandemic of the 1980s and 1990s. The ashes of many who died have been scattered throughout the church’s garden.

St. John’s congregation uses chairs—rather than pews—that can be cleared away. Smith said that ComforPedic donated dozens of mattresses that can be unrolled and are easily portable.

The only rule that will be enforced is noise. “Somebody can be ‘three sheets to the wind’ [very drunk],” Smith said. “And that’s fine as long as they’re quiet.”

He also said the church plans to accommodate personal items the guests have, like shopping carts or blankets, in a small parking lot behind the church.

Once homeless Latina now a resource for the homeless, undocumented