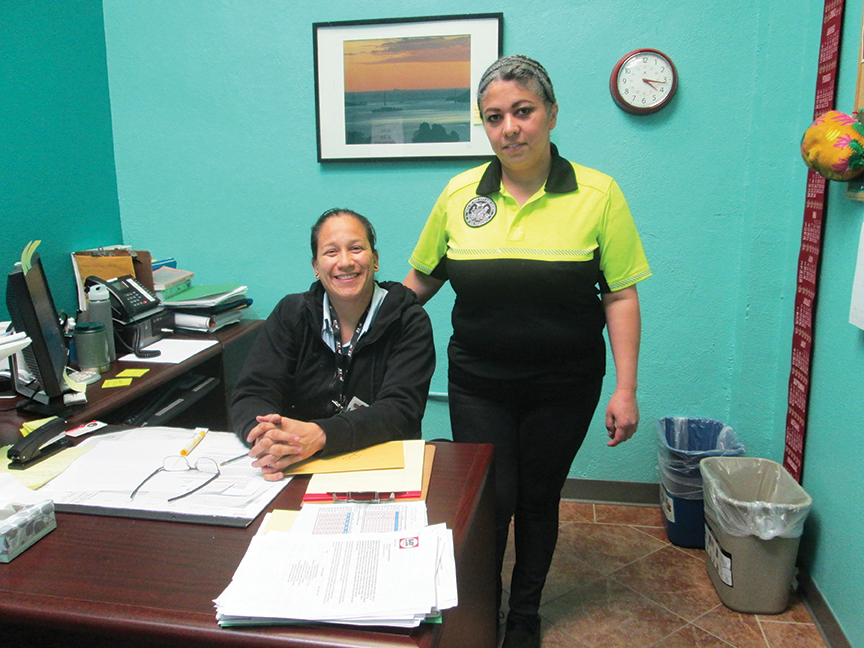 Every day of the week, Olga Romero wakes up at 5:30 in the morning to drive her four children to school and head to work. When Olga first came to San Francisco 20 years ago, her American dream was to own a big house and become a police officer but things turned out very differently.

She has taken her struggles in stride though, and currently works as a Community Ambassador, helping San Francisco’s homeless population.

Olga came to The United States from Colombia in 2000 with her husband and son and pregnant with a her daughter. A few years after settling here in San Francisco she faced a lot of judgement, a lot of disrespect and discrimination. So she decided that she’d change her physical appearance to fit into American society by dying her hair blonde and losing weight.

“Physically I took care of myself better, eating better to lose weight,” she said. “My hair, I had black hair, but I just switched it to blonde.”

By 2007 she had another daughter and son, and then she was kicked out of her house by her husband and had no place to go. She became homeless living with her children. This is when she knew that she had to start working hard to survive.

There were times where she felt like she wanted to give up but her motivation was her kids, she wanted them to have a better life. “When I see my kids and when I see their faces I say, ‘You know its not their fault that they came into this world,’ and I had to continue.” Being an undocumented immigrant in America makes it hard to find a job, but in February 2008 she found work at a McDonald’s in the Bayview District. Eventually she had enough money to buy a very small house in a few months of just working there. Of course she wasn’t satisfied and kept working harder.

In 2009, the house burnt down and she was left homeless again in a shelter and went out to look for a better paying job to support her family. She had to leave her children alone in the shelter during the weekends as she went out to search for jobs, and during the weekdays she had to take them all the way to Glen Park just to drop her kids off at school. Finally, after two difficult years she learned about the Community Ambassadors Program through one of the homeless shelter coordinators and she decided to apply for a job there. The Community Ambassadors Program is a “neighborhood engagement job training program” that is operated by the San Francisco Office of Civic Engagement & Immigrant Affairs.

She got the job and started working there and is very passionate about it, she worked up to the position of backup team leader. “I am more of a caregiver,” Romero said. The Community Ambassadors Program is a job filled with multicultural, and bilingual people. Working as a community ambassador her job is to help the homeless population.

She helps them by giving them resources, offering free clinics and programs, not to mention the Community Ambassadors Program building is LGBTQ friendly and has one day out of the week that is dedicated to women in the community.

In 2017, Olga finally received her green card and is no longer an undocumented immigrant. “I felt a lot of weight lifted,” Romero said, as tears of joy streamed from her eyes.

She’s so passionate about this job because she has been through that struggle herself and she knows if she can make it out, then they can too.

“I see people who are struggling everyday fighting battles inside trying to get better,” she said. “My job is rewarding when I see at least one person out of the streets.”

VIDEO: D’Maize, our food is our culture