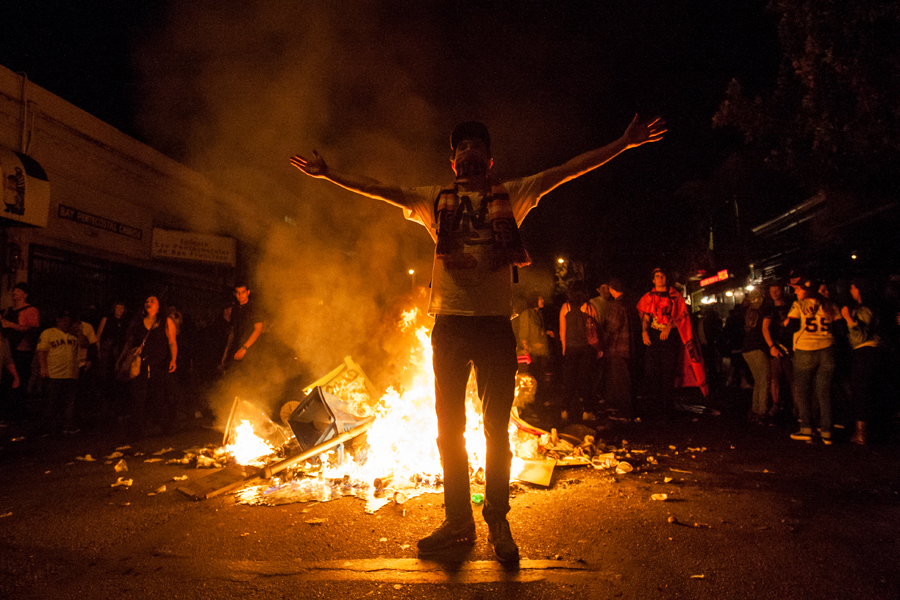 Watching Madison Bumgarner toss five masterful shutout innings in relief to close out the 2014 World Series apparently wasn’t enough for some people, who still felt the urge to throw stuff.

“I can tell you, being in these situations many, many times, there were as many bottles thrown at police officers last night as I can remember,” a visibly tired Greg Suhr said on Oct. 30. The San Francisco Police chief was himself pelted in the leg with a glass bottle by a hooligan “celebrating” the San Francisco Giants’ third championship in five years.

“And it is disgraceful,” Suhr continued. “We’re fans too, and we’re out there doing our job. And these people throwing the bottles, they’re not on the Giants. They don’t have the best… aim. So they can hit other people to.”

Shortly after third baseman Pablo Sandoval squeezed the final out on Oct. 29 at 8:21 p.m., euphoric revelers swarmed city streets the way many did in 2010 and 2012.

Unfortunately some of those celebrations turned foul.

Amid the flying beer bottles, blazing bonfires, gunfire and drunken and foolish mayhem that engulfed the Mission District and the areas surrounding AT&T Park, the SFPD reported dozens of arrests including two separate non-fatal shootings, one stabbing and one battery, all taking place in the Mission.

“To the fans that came to San Francisco and celebrated, like we’ve been there before, God bless you,” said Suhr, who admitted to taking scores of selfies with fellow fans, in addition to pouring out countless beers. “To the clowns, that came to San Francisco to act out, I guess you just don’t know what it’s like to have a good time without being a jerk—and we had a lot of them last night.”

Of the 40 citywide arrests that police made that night, 29 were for public drunkenness. Roughly half of those drunken arrests were city residents. Police also made two downtown gun arrests and six felony arrests.

One of shootings occurred at 21st and Valencia streets when a 19-year-old Latino male was walking passed two men having an argument. One of the men tried to resolve the argument with a handgun, firing at the other man; he missed and hit the 19-year-old passerby in the arm.

Police received reports of another non-life threatening shooting when a man walked into SF General with a gunshot wound, claiming he was shot at 16th and Bryant streets.

The stabbing also occurred over an argument at 21st and Valencia streets said Suhr. The victim was stabbed three times and was in serious but stable condition as of Oct. 30.

Elsewhere, three officers were hospitalized as a result of thrown bottles. They have since been released. Several other officers were also hit by bottles, but refused treatment.

Other casualties included nine police cars—four that were “tagged” with graffiti and five that had broken windows and windshields.

Damage to city and private property was limited to tagging, Suhr said.

“The helmets that we were wearing were for protection–we were completely defensive. We wanted to facilitate a celebratory crowd we did do that,” Suhr said, claiming that his officers don’t use tear gas in crowd control situations. “It’s our responsibility to take the hits. We don’t enjoy it, but that’s our job.”