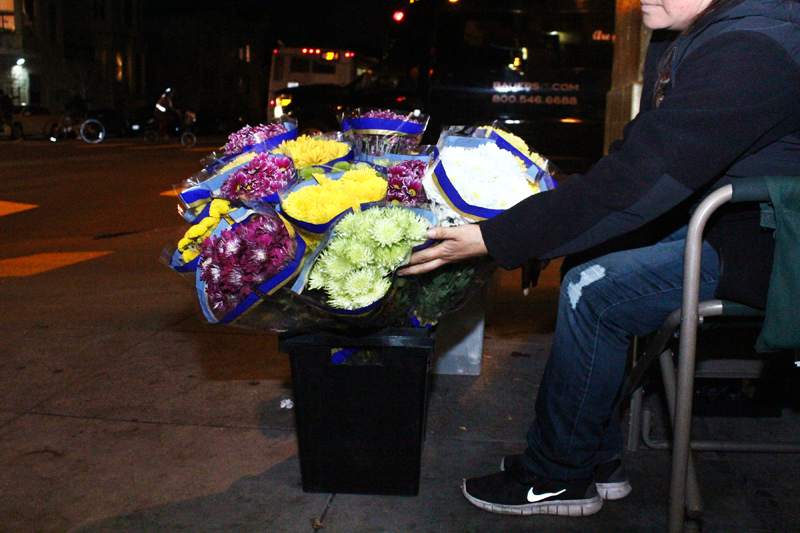 Photos and Story by Edgar Pacheco

Three times each week, Marisol Ortega rises at 4:30 a.m., ready to work while most of San Francisco still lies asleep. From her home, she makes the two-hour morning drive to Watsonville and Salinas, all in the effort to retrieve the flowers that support her family.

Scattered throughout the Mission District, women like Ortega make their livelihoods selling flowers at BART stations and street corners; they oftentimes smile.

But behind that smile is a story. Ortega, a mother of three, has been selling flowers from the same corner for 14 years, but her history in this country started further back. Originally from Puebla, Mexico, Ortega immigrated to the United States 22 years ago. Like many Latinos, she risked crossing the border. She was also nearly nine months pregnant and just nine days after setting foot in this country, Ortega gave birth to her first child.

“Those nine days changed my son’s life, and it opened many doors for him in this country,” Ortega said.

Yet one of the most difficult moments for her was when her husband died, leaving her alone with their children.

“When the father of my children passed, I felt half my life also passed with him,” Ortega said. “But I had the other half for which I had to fight for and succeed, and that’s my children.”

Working hard seven days a week is how Ortega has managed to raise her children. Her colorful flowers placed in plastic containers on the floor, don’t cause Ortega to harbor any envy towards other florists in the area. According to Ortega, sales have been stable over the past years and she hasn’t been affected by nearby florists. Now that Valentine’s Day is approaching, she and her family prepare for the busiest day of the entire year. For her, Valentine’s Day represents working alongside her children, all of whom help on this busy day.

“Seeing my flowers make couples happy and smile after a fight is what I like most about my job,” Ortega said.

Her road has been a hard one, but she continues to walk it. And she does it for her children, their education and their future.