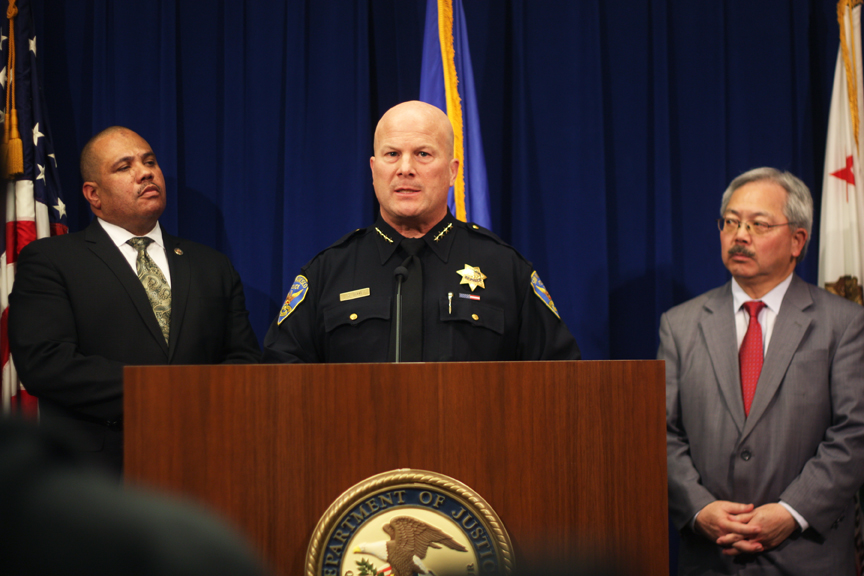 In response to the mounting distrust between communities of color and law enforcement in San Francisco, federal and local authorities have launched a collaborative and voluntary review that will examine the San Francisco Police Department and its practices.

The review—announced on Feb. 1— will be conducted by the Department of Justice’s Office of Community Oriented Policing Services (COPS), with the aim of producing an independent and in-depth report of the SFPD’s operational policies, including: training, practices, accountability pertaining to stops, searches and to the use of force.

The collaborative review (not to be confused with an investigation) was requested by community members, San Francisco Mayor Ed Lee and SFPD Chief Greg Suhr, following a very troubling year for the SFPD, which included the racist text messaging scandal and numerous questionable fatal officer-involved shootings—the latest being that of Mario Woods last December in the Bayview.

“Almost immediately after the officer-involved shooting of Mario Woods, it was not lost on anybody that the trust of many residents in San Francisco was shaken,” Suhr said. “We have to find a way to deal with folks … especially folks who are in crisis, with something other than a firearm.”

The review intends to help rebuild the broken relationship between communities and law enforcement by gathering input from various communities and their leaders, in addition to conducting voluntary confidential interviews with numerous ranking members of the SFPD. That assessment process, which includes looking at documents and policies, will likely take 8 to 10 months.

The COPS office will then issue a series of public reports detailing their findings and specific recommendations for the SFPD. At the end of the process, which will likely take a little more than two years, the responsibility of implementing those recommendations will fall on the city; the recommendations won’t be mandatory.

“With our process, it’s voluntary. So they’re not enforced in a court of law,” said COPS Director Ronald Davis. “But I will offer this: They’re absolutely enforced in the court of public opinion, which can be just as powerful.”

The fact that none of the recommendations will be mandatory is troubling news to some.

“It’s a step in the right direction. But the police do not demonstrate willingness to comply with their current oversight. So without additional enforcements, I don’t know how helpful it would be,” said Karen Fleshman, with the Justice 4 Mario Woods Coalition. “The only people [the police] are accountable to are each other, so I don’t know how you go breaking that kind of culture within the department. I do think these people seem extraordinarily competent and good at what they do, so that gives me confidence.”

The review was launched just days after San Francisco District Attorney George Gascón accused the SFPD, Suhr and the Police Officers Association of obstructing an investigation into the department’s practices.

“We’re going to be very candid. If there is an obstruction, we will make it crystal clear that we see it,” Davis said. “Now with that being said, I don’t know enough to say that that’s what’s happening.”

San Francisco will be the 10th city to utilize the COPS program, which is part of the Collaborative Reform Initiative.

Davis along with Noble Wray, chief of COPS Policing Practices and Accountability Initiative, will return to San Francisco on Feb. 24, for the first of several listening sessions at a location yet to be determined.

“This is a long-term journey,” Davis said. “I’m not going to ask for blind trust—that somehow magically overnight some things will change—but I will ask for an opportunity to work with you.”

“Public safety cannot just be the absence of crime, it must include the presence of justice, and the only way to do that is to make sure the department is living up to these standards,” Davis continued.

“We will speak to proportionality, we will speak to de-escalation, and we will constantly remind the officers of the value and sanctity of life—of everybody’s life. Not just the officers, but the public and then that of the people that we’re dealing with, who could even be possible suspects of crime.”