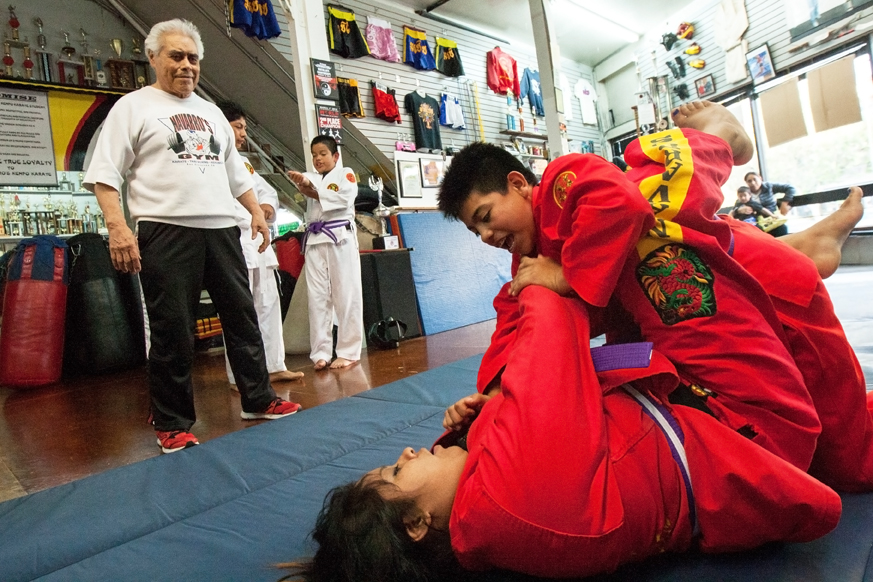 For 43 years, Carlos Navarro has run the Navarro’s Academy of Martial Arts & Bodybuilding Gym from its location in Bernal Heights, but it looked as though he would be forced to vacate the space at 3470 Mission St. after the landlord announced in August 2015 that rent would increase from $1,800 to $6,500.

Despite pleas from the Navarro family and District 9 Supervisor David Campos, the building’s owner, Alice Tse, informed them that a Christian bookstore would be replacing the gym. However, Navarro and his daughter, Rubie Navarro, who helps him run the gym, are not leaving without a fight.

“We don’t have a good business here [according to Tse] because we’re not making top dollar,” said Rubie. “I’d rather charge my students what is affordable to them so that they can keep their children off the streets.  It’s good business for us on the longevity that [a] child grows up to be a police officer or grows up to be a supervisor and turns around and helps others.”

Since being told that they needed to leave the space, the Navarro’s have taken action, hiring Salvatore Timpano, a landlord-tenant lawyer in San Francisco.

According to Timpano, the landlord has the right to take possession of the property if the landlord complies with state law. In this case, the landlord retaliated against her tenants after they asked for repairs that were necessary to the building, serving them with a notice to vacate.  But the Navarro’s felt that the notice was served in bad faith, and was in violation of state law.

They are hoping for some type of settlement agreement with Tse, where the landlord would receive market value rent through tenant contributions and Proposition J—the preservation fund approved by voters that provides incentives for landlords to continue to rent to historical legacy businesses at risk of displacement. The case will go to trial (unless it is settled or is dismissed) where a jury will decide who prevails.

A demurrer hearing (a challenge to the legal validity of a complaint) was held in November with the Navarro’s prevailing. Rubie and Timpano both stated that they have filed all of the appropriate paperwork and are waiting for the landlord to file an amended complaint by sometime next week.

Community members have rallied to defend the Navarro’s.

“Navarro’s is a legacy business that is a vital part and fabric of the community going back decades,” said Erick Argüello, president of the Calle 24 Latino Cultural District. “They are part of the soul of San Francisco.”

Supervisor David Campos, who authored Proposition J, said his legislation is designed to protect businesses like the Navarros”.

“The Navarros are the type of business that has reached out and played a role in protecting the public safety and giving young people equal positive activities after school,” Campos said. “So we support their fight to continue serving the community as they have for decades.”

“They have an ax to grind against my client,” Timpano said of Tse’s legal team. “My client would actually pay more rent than they’re currently paying and Prop J would substitute the difference … but the landlord won’t consider any Prop J benefits or applications. They want to proceed with the eviction.”

The Navarros’ situation is not unique.

“It’s part of a bigger pattern of rent going way up and you have generations of students who come to the studio who aren’t able to access it anymore and there is no regard for what people in the community have traditionally wanted… It is [more] about what is going to make the most money for the building owners,” said Julien Ball, an organizer with the Mission Bernal chapter of Alliance of Californians for Community Empowerment.

Despite the current litigation, Navarro’s still has good number of students enrolling in its classes.

Hugo Cesar Rincon, a student since 2002, said there is a sense of community and family there, and that seeing the Navarro’s fighting back gives the students courage to keep fighting in their own lives, even when it is difficult.

Calle 24 gets a new home and a new executive director