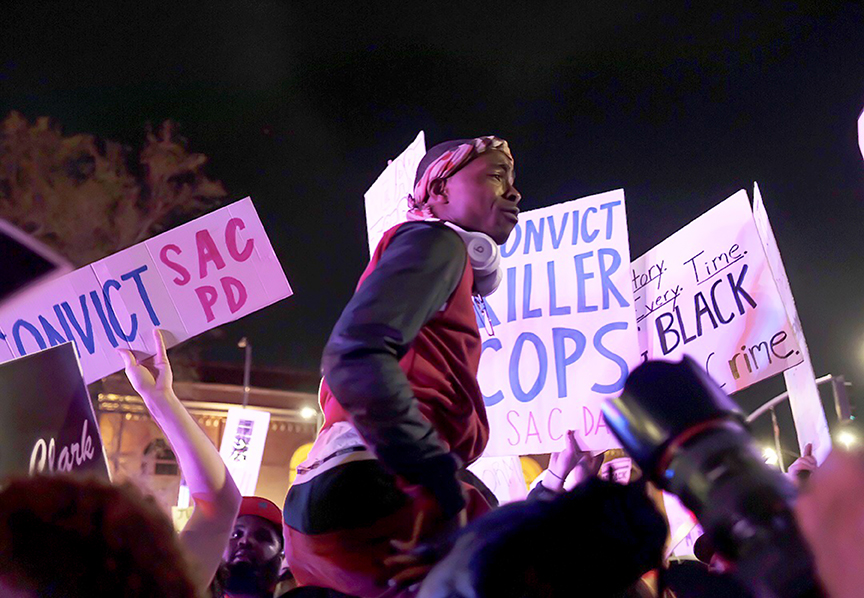 US media, politicians continue to ignore the ongoing tragedy in Gaza

Stephon Clark was lynched. And it wasn’t in Mississippi in the year 1955, but two weeks ago right here in the capital of our supposedly “Golden State.”

A lynching is really the only way to describe how Clark, a 22-year-old Black man and father of two, lost his life—shot in the back March 18 by two Sacramento police officers as he stood unarmed in the backyard of his grandparents’ home.

“Lynching” is an uncomfortable word. Many would rather believe that it no longer has relevance  today. Relegated to a bygone and largely forgotten era, the word describes an act of unapologetic violence inflicted on a person, who was nearly always Black. The lynching victim was typically accused of some petty offense; sometimes having been born Black was crime enough.

Stephon Clark had been accused of a petty crime. Police said that they were responding to 911 calls of a man breaking into cars and hiding in a backyard. Police body camera footage and the aerial helicopter footage from the Sacramento Sheriff’s Department, who claimed they saw Clark using a crowbar to break a window, show two officers chasing Clark before ambushing him in his backyard.

“Show me your hands! Gun gun gun!” one officer screams out, prompting both of them to immediately open fire in a barrage of 20 bullets. When officers approached Stephon Clark’s lifeless body to administer medical aid (five minutes after the initial shot was fired), they found a cell phone.

There was no gun. No crowbar. No life left in Stephon Clark’s handcuffed body. He was defenseless against the lies of his murderers—lies that fit, and thus perpetuate, the narrative that Black and Brown men are, just by their mere existence, a threat to police.

The mainstream media does its part to fuel this deadly narrative, being always quick to regurgitate “official police accounts” for the sake of making a deadline, and slow to issue retractions for lazy journalism.

But we can see past the false apologies and hollow promises of police reform that followed Stephon Clark’s killing, which is why a desperate community empowered by fury and grief shut down the I-5, blocking fans from attending insignificant basketball games to bring attention to a far greater and significant issue.

These lynchings must stop. Lynching was and is an act of terror, used to intimidate Black people into staying in their place. We cannot stand by idly, like all of those who literally stood gawking and smiling at lynched Black bodies across this “great” country, not so long ago.

We must continue to press for real reform of law enforcement, and we will. For Stephon and all of the other victims of police violence, we will continue to make our voices heard and our actions felt.

No charges filed against officers who killed Amilcar Perez-Lopez