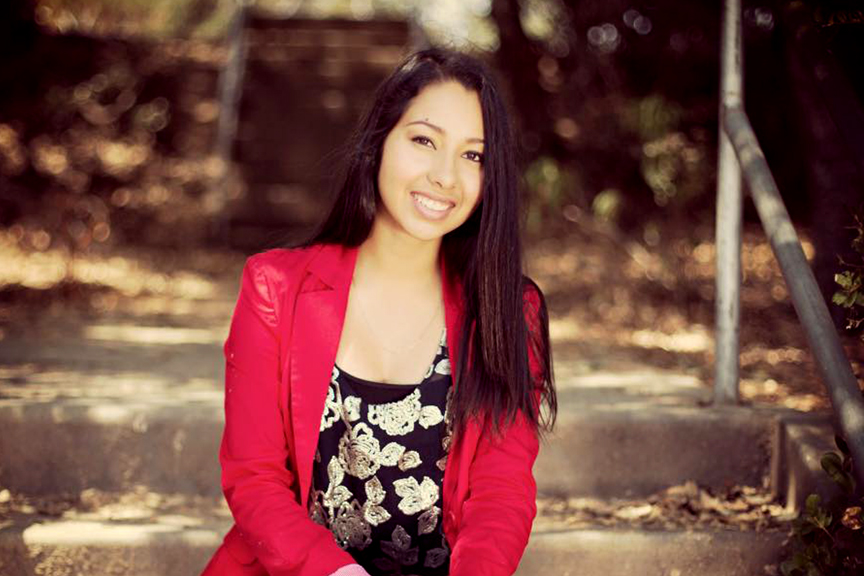 Former DREAMer and East Palo Alto resident Sarahi Espinoza Salamanca was one of four Latinas who claimed the Hispanicize 2016 Positive Impact Award, for her development of a website and mobile application that provides access to college scholarships for DREAMers and undocumented students.

The 26-year-old Salamanca came up with the idea of an app, DREAMers RoadMap, that provides these services for students, after having struggled with school herself as an undocumented student.

“I was really outgoing in high school, so everyone would ask me, ‘Where are you going to college?’” Salamanca said, recalling her teenage years at North Hollywood High School. “It got to the point where hearing the word ‘college’ would make me sick. I didn’t want to hear that word anymore.”

Set to launch April 13, DREAMers RoadMap will feature lists of scholarships that users can save as well as push notifications of upcoming deadlines, a sharing feature to other social media outlets as well as a community feature where users can suggest a scholarship that isn’t listed on the app and website.

Salamanca was born in Michoacan, Mexico and came to the U.S. when she was four years old. After high school, she attended Cañada College in Redwood City. But her legal status was never a problem while growing up until she wanted to apply to college.

“As a kid, you’re told, ‘Go to school, do well and you’re going to go to college,’” Salamanca said. “[For that reason] I didn’t feel like there was a need for me to expose [my status] to anyone until I applied to FAFSA and I was denied and that’s when I decided to share with my teachers and counselors that I was undocumented.”

Salamanca’s teachers and counselors didn’t know how to help her get funds for college when she applied, as is the case for many undocumented students throughout the country.

Salamanca started writing a blog about her story in 2012 after she attended a networking event in San Francisco, where she met her future mentors for the DREAMers RoadMap.

In 2013, she applied to the FWD.us DREAMer Hackathon for Immigration Reform, and was one of the 20 DREAMers to compete.

A year later, the White House recognized Salamanca as a champion of change for her work on her blog and for her work as an environmental science technology instructor with the Girl Scouts of Northern California.

“I would go into low-income communities and talk to young Latina girls and African American girls and Pacific Islander girls,” Salamanca said. “It was so gratifying because a lot of them hadn’t encountered what I was teaching them. The point of the program was to inspire them to—in the future—go into a STEM career.”

“For a while, since I started that blog, I wanted to create something just focusing on being undocumented because I was a DREAMer myself, so I took that opportunity as a window to venture [from] my blog and create an app for DREAMers,” Salamanca said. “It was a really good feeling that they believed in my vision and what I am trying to accomplish, seeing that this was my first time.”

But having overcome the obstacles of being an undocumented high school student applying for college, Salamanca still faces challenges. Some of those challenges stem not only from being Latina, but from being a woman in technology.

“They see my age and they see my color and they really ask me if I’m the founder or if I’m the CEO,” Salamanca said. “It’s also difficult to give orders to someone who is older than you and for them to take you seriously.”

In the future, Salamanca hopes to expand DREAMers RoadMap as a mentoring program as well where undocumented college juniors and seniors can guide high school students through the process of what it’s like to be in college.

“I hope that this app will encourage them to pursue their college education and believe that it’s possible,” she said. “And hopefully just have Latinos and undocumented students go through college and have money not be the issue or the reason why they decide not to go.”