Luis Avalos was 19, undocumented and a freshman at City College of San Francisco when President Barack Obama’s administration enacted the Deferred Action for Childhood Arrivals (DACA) in 2012—a program that allows undocumented immigrants who arrived in the United States before their 16th birthday or arrived before June 2007 to apply for a two-year temporary legal stay, shielding them from deportation.

“It was just a shining light in a dark tunnel of uncertainty,” said Avalos, whose parents immigrated to the United States from their native Michoacán, Mexico when he was three.

Because he spoke English without an accent and attended one of the top public schools in the country, Lowell High School, Avalos was able to conceal his undocumented immigration status. But hiding became impossible by his senior year of high school, as he was unable to work legally, apply to college or even obtain a driver’s license.

“I always had the ambition to study and to pursue something higher for myself,” said Avalos, who now works at CARECEN. “But because of my immigration status, I didn’t know what that would entail.”

More than 770,000 DACA requests have been approved since 2012, according to a June report from the U.S. Citizenship and Immigration Services. However, President Obama’s 2014 executive order expanding DACA to undocumented immigrants who arrived before 2010, and to Deferred Action for Parents of Americans and Lawful Permanent Residents (DAPA), remains on hold after the United States Court of Appeals for the Fifth Circuit in New Orleans, Louisiana ruled 2-1 against the president’s order on Nov. 10.

That latest decision was the result of an appeal from a hearing last May, when the same Louisiana court initially ruled against the DACA expansions and DAPA.

“We were not surprised to lose the appeal at the Fifth Circuit,” Sally Kinoshita, deputy director of the Immigrant Legal Resource Center, said during a panel discussion at New America Media on Nov. 10. “Based on the composition of who the judges were, we knew they’d already expressed their opinions, and said that they didn’t believe that these programs should move forward.”

A day after the Louisiana ruling, the Department of Justice announced plans to appeal the case to the Supreme Court. If the Supreme Court takes the case, there could be a ruling on the programs by next June.

The president’s plans for the expanded DACA and DAPA were derailed shortly after they were announced a year ago when Texas and 25 other republican-led states filed a lawsuit in district court in Texas, arguing that the president overstepped his executive power.

“It goes to show how much work still needs to be done,” Avalos said. “I tell others, ‘Don’t let the decision scare you. Things always change. Right now, the political climate might seem really negative towards immigrants, but a few years from now it might be a completely different story.’”

Applying for DACA more important now than ever
Despite the latest ruling, DACA and DAPA supporters are urging people to apply for the current DACA, because the more people who apply, the harder it will be financially and politically for these programs to be rolled back, said Kinoshita. If the expanded DACA and DAPA are implemented in the coming year, 1,180,000 people, or about half of California’s undocumented population, would be eligible for the programs.

The cost of a DACA application is $465, not including legal fees. A number of reputable community organizations throughout the Bay Area, however, can provide legal assistance for at a discounted rate. Some of those organizations in San Francisco include: the Asian Law Caucus; Asian Pacific Islander Legal Outreach; Catholic Charities CYO; Dolores Street Community Services; International Institute of the Bay Area San Francisco; La Raza Centro Legal; and Legal Services for Children.

Despite the costs, undocumented immigrants are urged to apply for DACA.

“For every dollar you spend on DACA—including potential legal services fees—you can probably recoup 10 times that amount in personal and economic benefits,” said Kinoshita.

Statistics from the Council of Economic Advisers likewise show the potential economic benefit of these programs, citing that the U.S. gross domestic product (GDP) would rise between $90 billion and $200 billion (in today’s dollars) by the year 2024.

“All of the analysis has actually shown that there’s a great economic benefit to us as a community, not just those individuals who are impacted,” Kinoshita said, noting the vast economic costs of immigration enforcement and deportations, along with the damage inflicted upon families who are being torn apart. “You actually have more political power, having some kind of stability, than if you have none at all.”

Annette Wong, immigrant rights program manager with Chinese for Affirmative Action, put it into context:
“It wasn’t because of the good will of President Obama or the administration that these actions [expanding DACA] came about. In fact, it was really the courage and determination of undocumented youth activists who fought at the forefront of this struggle to win DACA for us.”

Deportations reached a record high in 2013 with 438,421 removals, 240,027 of which were for non-criminal offenses, according to the Department of Homeland Security.

“Under these circumstances, undocumented young people were fed up with these situations and wanted to create change for our communities, for all of our communities,” Wong said. “We are going to continue to engage in organizing and mobilizing to show that we will not let right-wing judges or right-wing states control what happens to the fate of our community.” 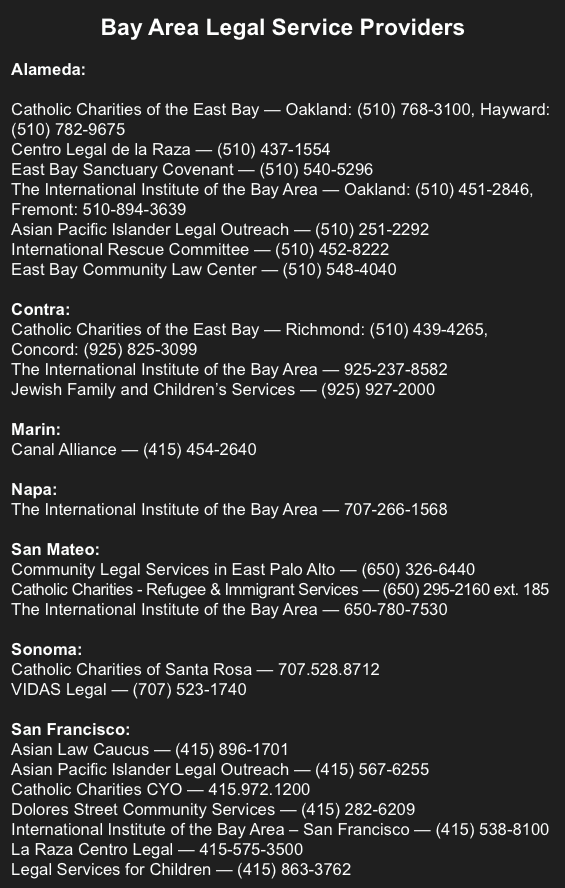 Taking full advantage of available resources
Despite countries like Honduras, El Salvador, Argentina and Mexico all having application rates of 80 percent or higher, China, India, South Korea and the Philippines all have application rates 20 percent or below. Focus groups in San Francisco found that some Chinese didn’t think DACA applied to them, said Kinoshita.

Juan Ortiz, staff attorney with International Institute of the Bay Area, also urged people to apply for other forms of relief, citing that about 15 percent of youth who have applied for DACA are eligible for relief such as U-Visas, for victims of violent crimes, and T-Visas, for victims of human trafficking.

Experts also urge undocumented people to save documents that prove their residency within the United States, to speak to a reputable lawyer should they wish to leave the country, avoid hiring ‘notarios’ or notaries, and to not commit any crimes.

Dayanna Carlos, program associate for the California Endowment, wanted to remind families that SB 4, the “Health for All Act,” goes into effect May 4, 2016. Governor Jerry Brown signed the bill last June, budgeting $40 million to expand preventative health services to all children under age 19, regardless of immigration status. Carlos also urged families to enroll into restricted Medi-Cal or emergency Medi-Cal now, so that the California Department of Health Care Services can start processing those enrollment applications in May of 2016.