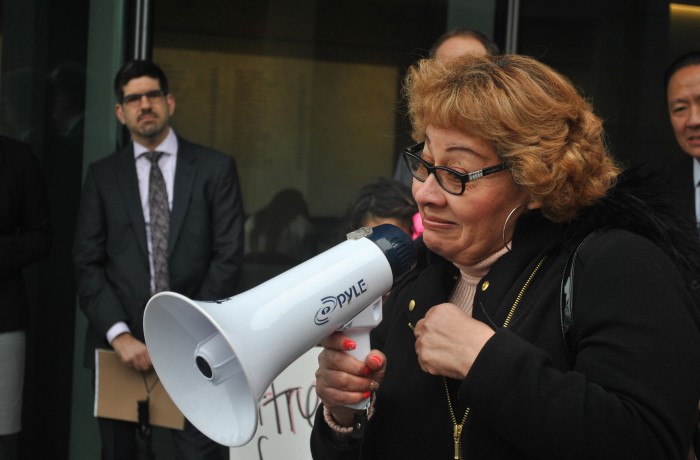 Dora Alicia Cortés addresses the media outside the SFPD headquarters on Jan. 20. Her fiancée Pedro Figueroa was detained by ICE agents last December outside SFPD headquarters after police informed him that his stolen car had been found. Photo Alejandro Galicia Diaz 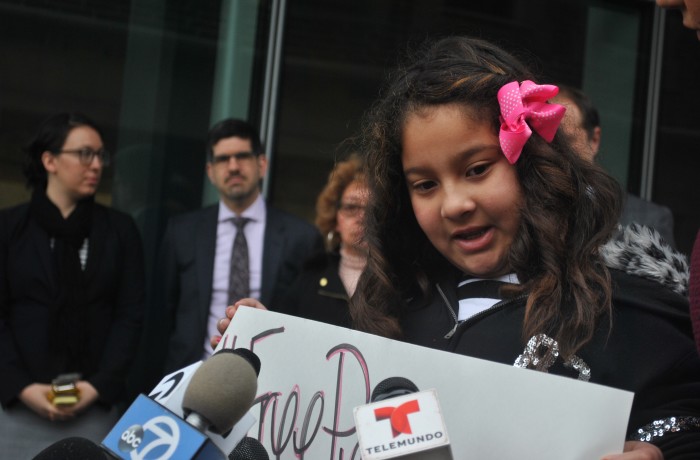 Pedro Figueroa’s daughter Leilani Cortez addresses the media outside the SFPD headquarters on Jan. 20. Figueroa was detained by ICE agents last December outside SFPD headquarters after police informed him that his stolen car had been found. Photo Alejandro Galicia Diaz 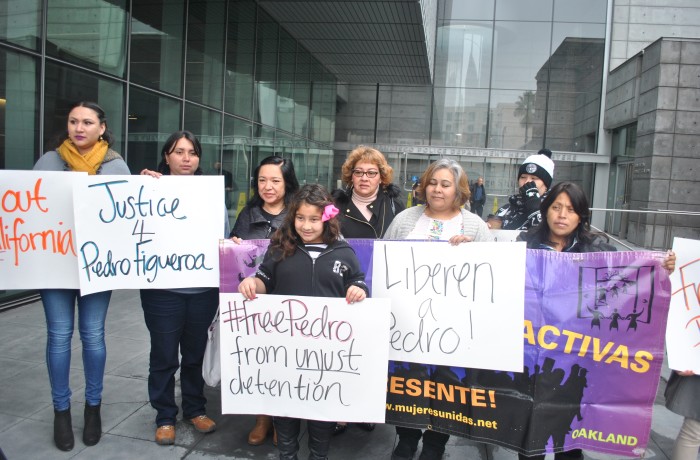 Demonstrators gather outside the SFPD headquarters on Jan. 20 to demand the release of Pedro Figueroa. Figueroa was detained by ICE agents last December outside SFPD headquarters after police informed him that his stolen car had been found. Photo Alejandro Galicia Diaz 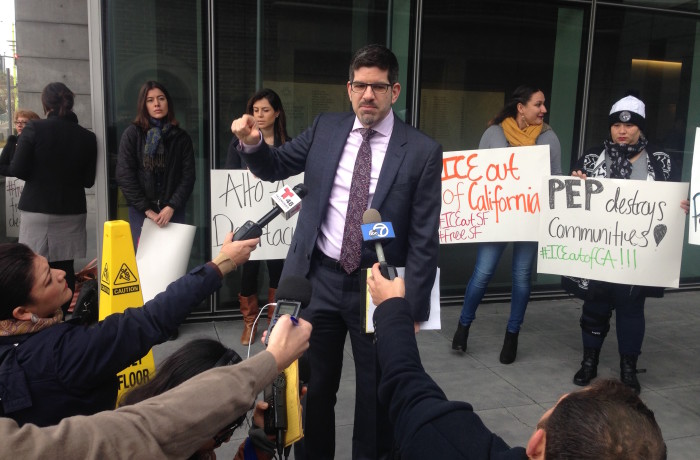 Zachary Nightingale, Pedro Figueroa’s attorney, addresses the media outside SFPD headquarters on Jan. 20. Figueroa was detained by ICE agents last December outside SFPD headquarters after police informed him that his stolen car had been found. Nightingale said his clients detainment is a “violation of the San Francisco sanctuary city law.” Photo Alejandro Galicia Diaz

What was supposed to be a happy moment for Pedro Figueroa and his fiancée on a December 2015 evening turned into a hellish nightmare, as he was unexpectedly detained outside of the San Francisco Police Headquarters by Immigration and Customs Enforcement (ICE).

According to Dora Alicia Cortés, Figueroa’s fiancée, the ordeal began after SFPD called Figueroa to come into the police headquarters near AT&T Park to sign some paperwork in order to claim his vehicle, which had been reported stolen in late November. After presenting his Salvadoran consular ID card to the police officer, he was detained for a few minutes but was then allowed to leave. However, as he stepped outside of the building, he was detained by an immigration officer, who had been waiting for him.

“For me, what was done to us was total injustice,” Cortés said during a press conference on Jan. 20, which was held at the exact location where her fiancée was detained by ICE. “It was very sad. The only thing we have done is believe in God because this truly has been very sad. He (Figueroa) helps me a lot, he is my right-hand and my strength.”

According to SFPD Capt. Jerome DeFilippo, ICE had issued a warrant for Figueroa 10 years ago. When police became aware of the warrant, they contacted the San Francisco Sheriff’s Department’s Central Warrant Bureau (CWB), which has the responsibly of contacting the agency that issued the warrant to confirm whether or not it is still valid.

“During that process, there was some confusion on the verification and confirmation side,” DeFilippo said. “The Central Warrant Bureau reached out to ICE, it was an ICE warrant. As they contacted ICE, trying to confirm the identity and the validity of the warrant, the ICE agent called the station here and spoke to our sergeant. During that process, ICE also sent an agent to accept the body. We didn’t inquire the immigration status of this individual. As we let the person go, the ICE agent had shown up and saw the person being released and grabbed the body of the individual on the sidewalk.”

According to DeFilippo, it was CWB that contacted immigration about the warrant, not SFPD. The police department doesn’t cooperate with Immigration and Customs Enforcement.

“We do not pass off prisoners off to ICE. We cleared him, we released him and as he walked out, the ICE agent had shown up, saw him on the sidewalk and grabbed him,” DeFilippo said. “We want the community as a whole to be comfortable to come talk to us.”

According to Figueroa’s attorney, Zachary Nightingale, Figueroa was ordered to be deported 10 years ago without ever being told about the hearing and never having received a hearing notice. Nightingale’s position is that it’s not up to SFPD to turn him over to ICE for deportation, and that his immigration case has been riddled with due-process violation.

“From my understanding, he (Figueroa) was a crime victim,” Nightingale said. “He went into the police station to collect his car that had been stolen, and apparently they discovered that in some record was a record of this 10-year-old ICE warrant for when he didn’t show up in a Texas court 10 years before. I believe it is a violation of the San Francisco sanctuary city law.”

Since being detained outside of the police station, Figueroa’s family has had to deal with all of the legal proceedings.

The fact that Figueroa was detained just days before the holidays was extra painful for his family, especially for his eight-year-old daughter, Leilani Cortez.

“I told myself that I’m not going to open up my presents until my dad comes,” said Cortez.

Figueroa also made his daughter a promise, one that he hopes to keep once he is released.