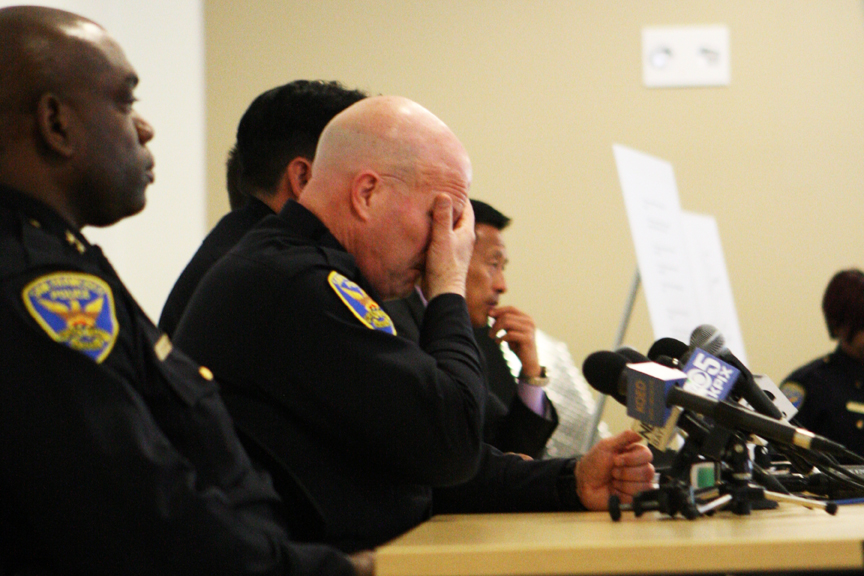 Suhr’s resignation came just hours after Bayview Station officers fatally shot a 29-year-old black woman, who was identified as Jessica Williams by the San Francisco Medical Examiner on May 20.

According to police, Williams was in possession of stolen a car and attempting to flee from an officer and a sergeant who were trying to detain her. In the scuffle that ensued, the sergeant fired one shot striking the woman.

She was taken to San Francisco General Hospital where she was pronounced dead.  It was the third fatal shooting of a person of color by the SFPD in the past six months.  (Mario Woods on Dec. 2, 2015 in the Bayview, and Luis Gongora on April 7, 2016 in the Mission being the other two.)

Suhr had faced mounting pressure to resign over the past few weeks, culminating in a 17-day hunger strike by a group of five activists dubbed the “Frisco 5,” who demanded his removal.

In response to the public pressure, four members of the Board of Supervisors—David Campos, John Avalos, Jane Kim and Eric Mar—also came out in support of removing Suhr.

“The past several months have shaken and divided our city,” Lee said during a news conference at City Hall just after 4 p.m. on May 19. “Following this morning’s officer-involved shooting and my meeting with Chief Suhr this afternoon, today I have arrived at a different conclusion to the question of ‘How best to move forward?’”

Lee said he will work together with the police commission to find a permanent replacement.

“Yesterday was probably one of the most difficult days of my career,” Chaplin told reporters on May 20. “It was hard because a young lady lost her life, and I watched a person who’s dedicated over three decades of their life, finally have to call it a career. But the mission has to go on; the department has to move forward.”

Chaplin told reporters that his top priorities are department reforms—two of them being body cameras for officers and the “use of force” policy. Chaplin also confirmed that the collaborative review between the U.S. Department of Justice and SFPD, which was announced in February, has begun and that the department already has a sense of some of the things that need to be fixed. He also said that some of the reforms have already been implemented, and the rest will be pushed forward.

Chaplin has inherited a department that has been damaged by a series of racism scandals and questionable officer-involved shootings, and he is now charged with the daunting task of rebuilding the trust between the department and communities of color.

“I’m going to go back to my gang task force days. Those same communities, I know most of those folks. I’ve worked exclusively with them,” said Chaplin, who has sat at Suhr’s side during contentious town hall meetings. “And we are going to try and repair that rift. I’m reaching out to everyone. If they truly, truly want change, they’re going to have to sit down and talk with me, and we’re going to have to come up with a strategy where everyone is comfortable with the path we’re all taking.”

According to the mayor, Chaplin has an “established a record of commitment to the city’s diverse communities, serving at Mission and Taraval stations, in the Gang Task Force.”

Edwin Lindo, one of the “Frisco 5” hunger strikers and a candidate for District 9 Supervisor, told El Tecolote: “We were sad that [another life was] taken yesterday. But the new chief has a responsibility to meet with this community and we need to have a voice in choosing the next chief.”

As of May 20, Williams’ shooting was still under investigation. Community members have suggested that Williams’ may have been pregnant at the time of her death. Seeking confirmation from the San Francisco Medical Examiner, they didn’t reply to phone messages or emails.