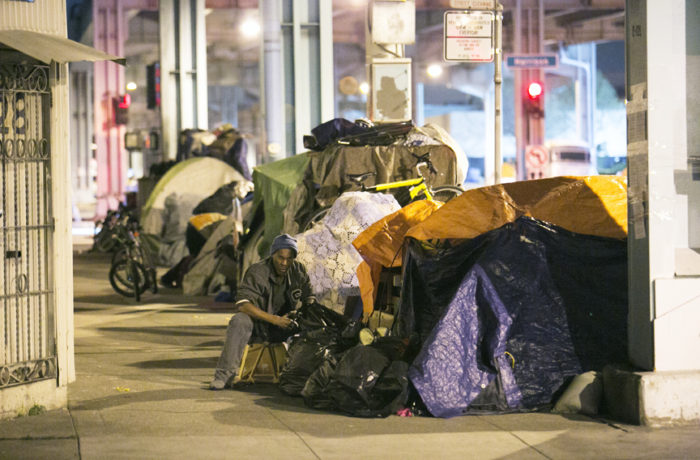 A man sits next to his tent in San Francisco at the Division Street homeless encampment, Friday, Feb. 26, 2016. Photo Santiago Mejía 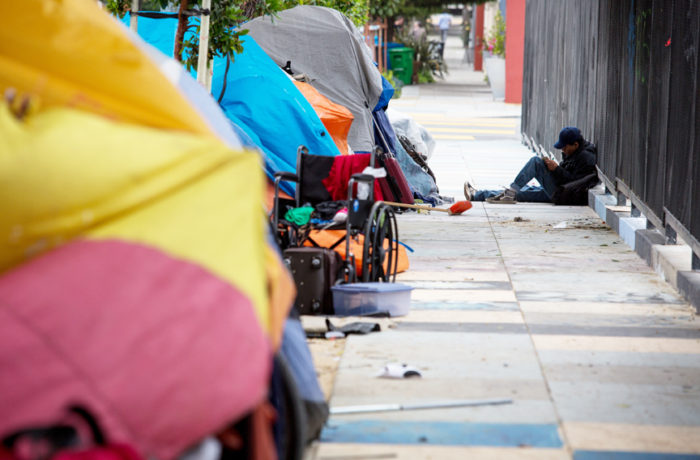 A man sits near a homeless encampment near 19th and Shotwell streets, Friday, April 8, 2016 in San Francisco. Photo Santiago Mejía 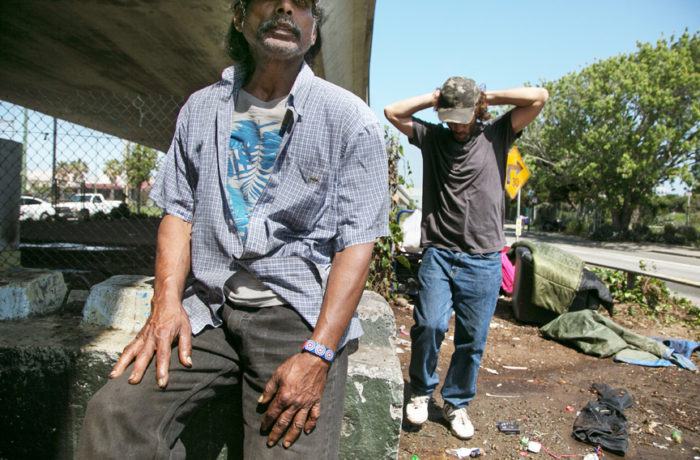 A man who only gave his name as Pimal, left, and Jason watch as a cleaning crew wash down the sidewalk next to a homeless encampment under Highway 101, near the Cesar Chavez Street exit on Tuesday, May 10, 2016 in San Francisco. Pimal said he’s lived at the encampment for six months, after his home was foreclosed in 2007. Photo Santiago Mejía 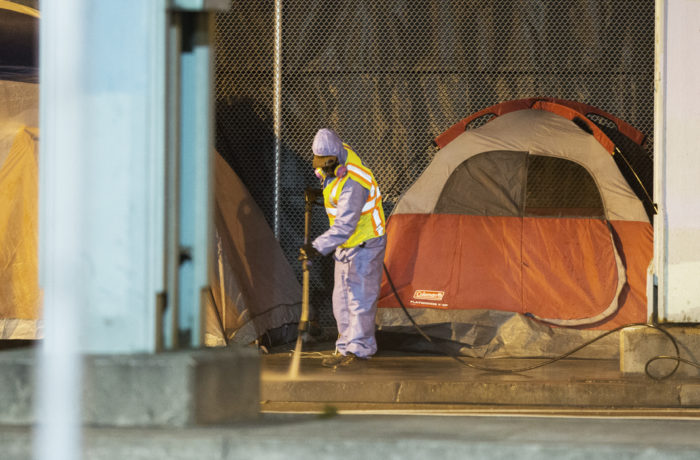 A Department of Public Works official cleans up the sidewalk at the homeless encampment on Division Street, Saturday, Feb. 27, 2016, in San Francisco. Photo Santiago Mejía 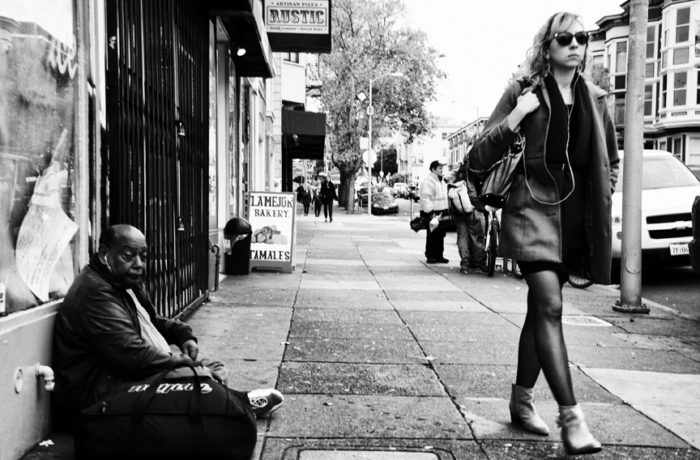 A homeless man sits at the corner of 24th and Mission streets. Photo Dhoryan Rizo 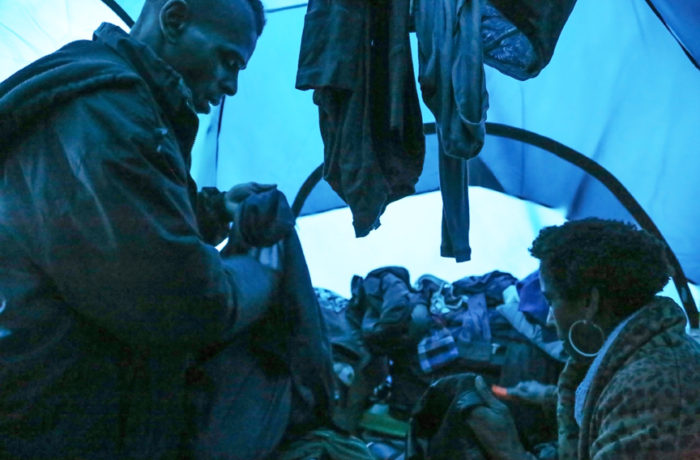 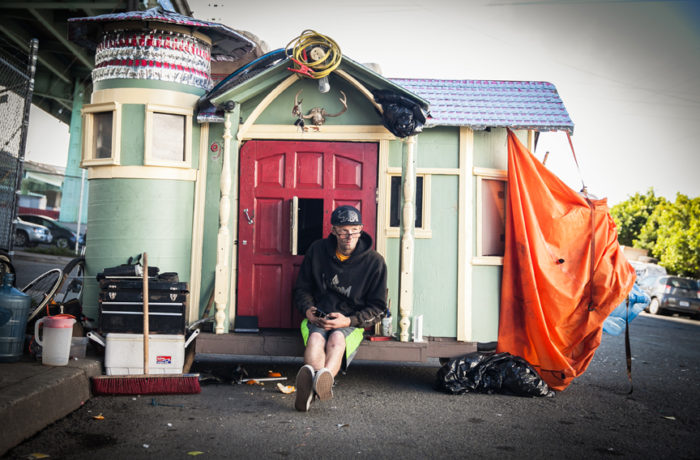 A construction labor and homeless man Brian Devlin, 28, looks out to the street in front of his tiny home located slightly under the Highway 101 Bayshore Freeway in San Francisco on Wednesday, June 17, 2015. Photo Ekevara Kitpowsong
Editor's note:
This issue of El Tecolote is dedicated to the nearly 7,000 San Franciscans who are currently living on the street, in shelters, in cars, or anywhere else other than a house. As a participant in the “SF Homeless Project” (a collaborative effort on the part of more than 70 media outlets), we have produced this issue with the intent of putting a face to our homeless neighbors, many of whom have been mistreated by factions of our city government, and by common citizens. Our aim is to humanize those who have been ignored or criminalized for being less fortunate than we. We want to share their stories, and the stories of those who aim to make this city better for the housed, and the un-housed alike. We want to show that though they me be homeless, their lives aren’t worth less than ours.
—Alexis Terrazas
El Tecolote Editor-in-Chief

To the city and people of San Francisco:

Like you, we are frustrated, confused and dismayed by the seemingly intractable problem of homelessness in our city. Like you, we want answers—and change.

We see the misery around us—the 6,600 or more people who live on the streets of San Francisco—and we sense it is worsening. We feel for the people who live in doorways and under freeways, and for the countless others who teeter on the edge of eviction. We empathize with the EMTs, the nurses and doctors, the social workers and the police. They are on the front lines of this ongoing human catastrophe.

Numerous noble, well-intentioned efforts by both public and private entities have surfaced over the decades, yet the problem persists. It is a situation that would disgrace the government of any city. But in the technological and progressive capital of the nation, it is unconscionable.

So beginning today, more than 70 media organizations are taking the unprecedented step of working together to focus attention on this crucial issue.

We will pool our resources—reporting, data analysis, photojournalism, video, websites—and starting Wednesday, June 29, will publish, broadcast and share a series of stories across all of our outlets. We intend to explore possible solutions, their costs and viability.

Though this is a united effort, we do not claim to speak with one voice. There are many lenses through which the issue of homelessness can be viewed. However, we do not intend to let a desire for the perfect solution become the enemy of the good. We want to inspire and incite each other as much as we want to prod city and civic leaders.

Fundamentally, we are driven by the desire to stop calling what we see on our streets the new normal. Frustration and resignation are not a healthy psyche for a city.

Our aim is to provide you with the necessary information and potential options to put San Francisco on a better path. Then it will be up to all of us—citizens, activists, public and private agencies, politicians—to work together to get there.

Homeless street artist brushes pain away one stroke at a time

Once homeless youth talks life on the street