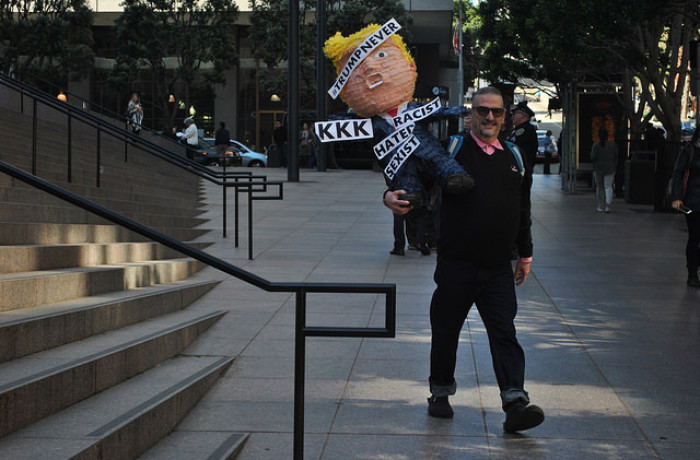 Michael Petrelis heads to the front entrance of the “Triple 5” building, which is 30 percent owned by The Trump Organization, to protest Donald Trump’s presidential candidacy. Photo Alejandro Galicia Diaz 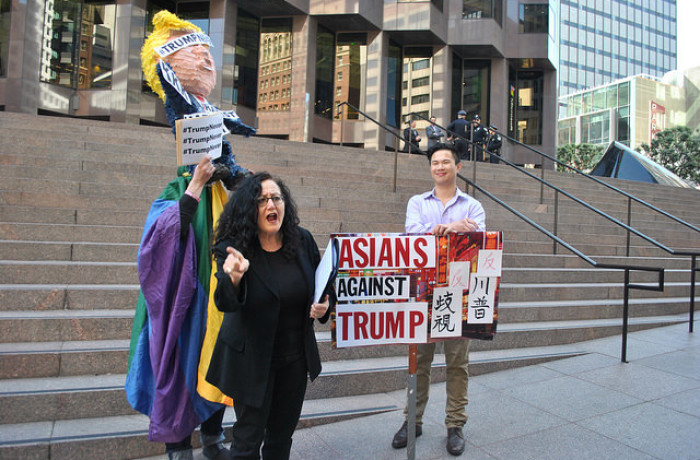 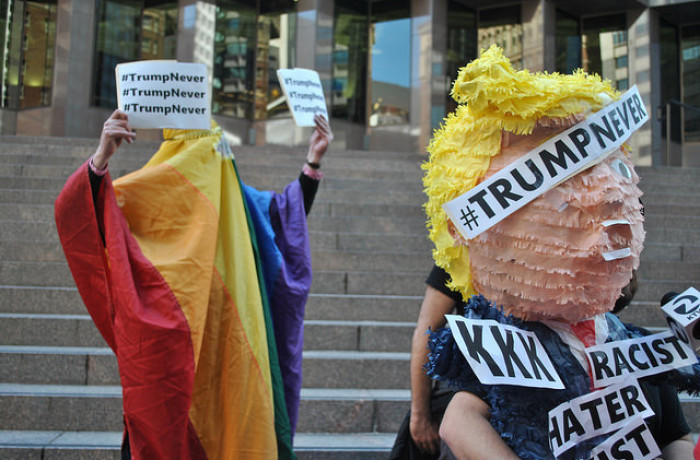 Michael Petrelis is draped in a rainbow flag as he holds a sign with the hashtag #TrumpNever as he stand outside of the “Triple 5” building, which is 30 percent owned by The Trump Organization, on Super Tuesday, March 15, 2016, in San Francisco, Calif. Photo Alejandro Galicia Diaz

On March 18, a small group of protesters gathered outside of the former world headquarters of Bank of America—the skyscraper at 555 California St., which is now 30 percent owned by The Trump Organization—to object to Donald Trump’s presidential candidacy

The demonstration took place on “Super Tuesday,” a day where the five states of Ohio, Illinois, Missouri, North Carolina and Florida, all held their Democratic and Republican primaries.

Trump won four of the five states on Super Tuesday, with John Kasich preventing a sweep by winning his home state of Ohio.

“We came out today because today is Super Tuesday in many states and we’re very nervous that Donald Trump is going to secure the GOP nomination for president,” said Michael Petrelis, who was draped in a rainbow flag and carrying a piñata of Trump. “And we’re here to say ‘Racist, sexist, KKK, Donald Trump, go away.’”

The rally against the leading Republican candidate aimed to highlight the violence he has incited throughout the country with his racist and sexist rhetoric.

It all started in June of last year in New York when Trump stood in front of a large crowd to announce his candidacy. In his speech, he boomed that his goal was to “Make America great again,” but also insulted many with his comments regarding Mexican immigrants.

Speeches like this, and many others since, have provoked his supporters to violence during his rallies.

On March 11, Trump’s campaign canceled its Chicago rally resulting in various fights breaking out between his supporters and protesters inside of the University of Illinois Chicago Pavilion.

A couple of days before that, John McGraw, a white 78-year-old Trump supporter, was arrested and charged with assault after sucker-punching 26-year-old black protester Rakeem Jones at a rally in North Carolina.

“You bet I liked it [Sucker-punching Jones],” McGraw said during a video interview that was posted by the Washington Post. “Knocking the hell out of that big mouth, we don’t know who he is, but we know that he’s not acting like an American. Yes he deserved it, the next time we see him, we might have to kill him.”

Back in February, Trump promised to pay for any legal fees that his supporters might encounter if they resorted to physical violence.

“So if you see someone ready to throw a tomato [at Trump during a rally], knock the crap out of him, seriously,” said Trump at his rally in Cedar Rapids, Iowa.  “I promise you that I will pay for the legal fees.”

Trump’s Super Tuesday win forced Senator Marco Rubio from Florida to drop out of the Republican primary. So far, Trump has won 673 delegates, and needs 1,237 to secure the nomination.

“If Trump wins the presidency, it’s very hard to determine how it will affect the country, simply because he vacillates,” said Melanie Nathan, executive director of the African Human Rights Coalition. “He goes backwards and forwards. He doesn’t seem to have any clear vision, except to incite racial tension. The way I’m seeing it right now at this moment, I think our country will be in deep problems.”