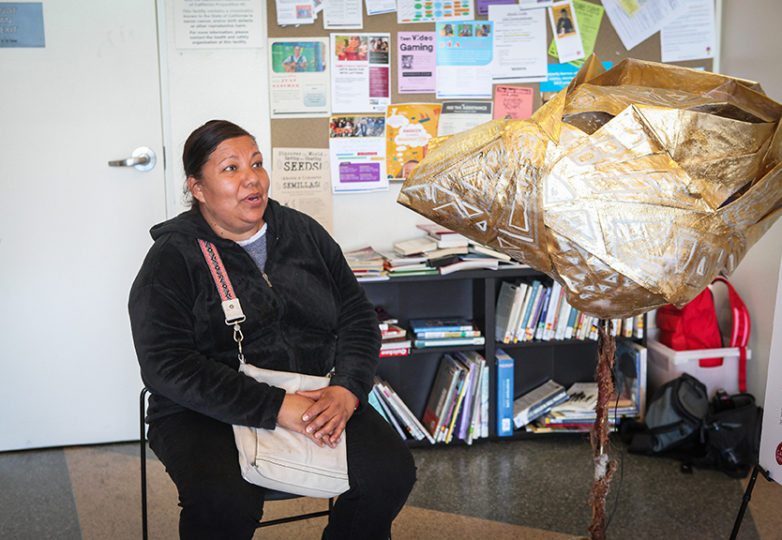 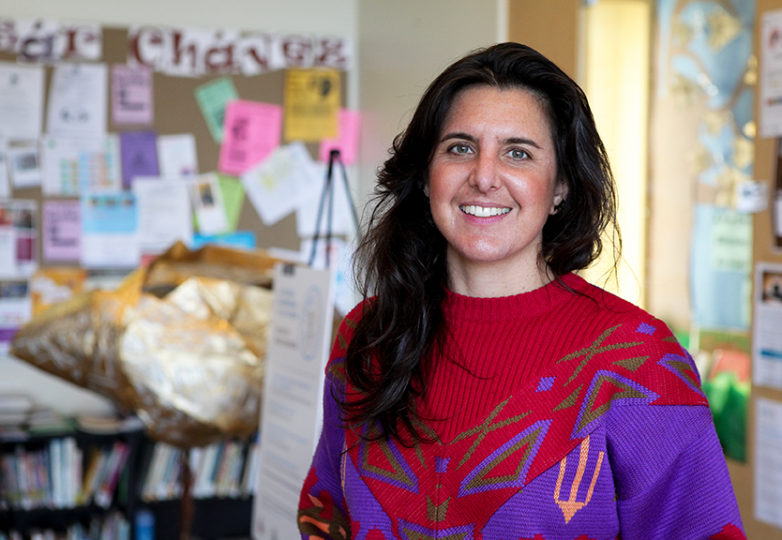 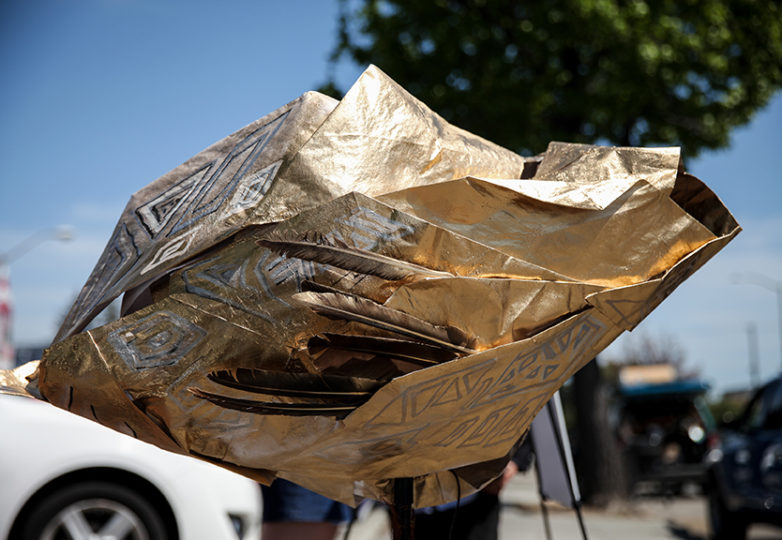 San Francisco artist Ivan Lopez created the sculpture El Tímpano, a community microphone, in the shape of a seashell, inspired by the role of la concha in Mesoamerican ceremonies. Photo: Ekevara Kitpowsong 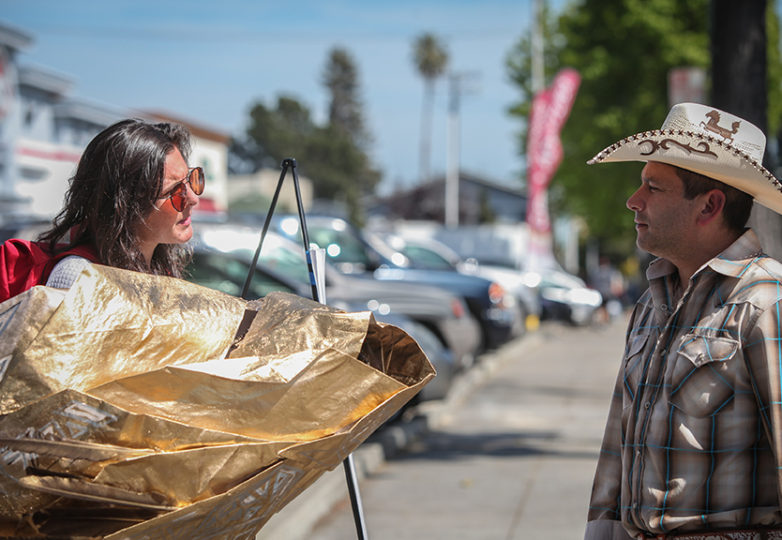 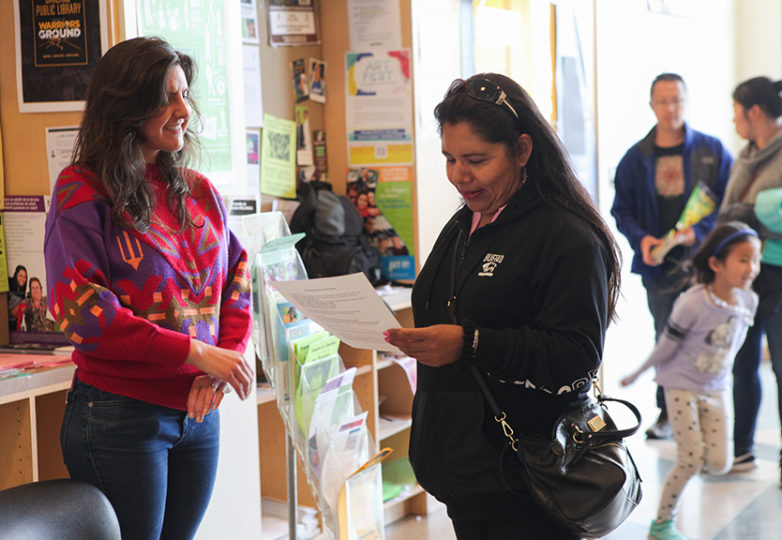 It was past midnight when Graciela heard a knock on her apartment door. “I was well asleep, and so I said, ‘Who goes there?’” Standing outside was the new owner of her apartment building, putting up notices that the current tenants would have to leave. This late night notice wasn’t the only way the landlord was making life in Graciela’s apartment miserable. Since purchasing the property in February, he had imposed new rules. She can no longer care for her plants in the patio. Her grandchildren can’t play outside. She isn’t allowed to grill in the common area. And now, “We have two cameras on the foot of our bedroom windows recording what we say”—which are among more than a dozen he had installed around the duplex. She had fought eviction before, but now, “I just want to leave because of this man.” Graciela, her husband, and their son will soon move in with other relatives. Their home has become a living nightmare.

Stories like these have become commonplace in East Oakland. Since 2012, rent in the city climbed more than 50 percent—the second-highest increase in the nation. While the growth of tent cities is a visible sign of the Bay Area’s housing crisis, and the Ghost Ship fire in 2016 drew attention to the hazardous living situations many local artists have been forced into, the experience of working class immigrants has gone on largely unseen and told.

Latino immigrants earn the lowest wages in the Bay Area, and yet in the past decade of rising rents, their population in Oakland has increased. So how are they coping with the astronomical cost of living? How are they finding, and keeping, a home? And what would they like to see change?

El Tímpano was created to answer questions such as these by providing a space for Oakland’s Latino immigrants to share their stories, questions and concerns. We partnered with local artist Ivan Lopez to build a microphone encased in a seashell-inspired sculpture, and throughout April, we took it around East Oakland and invited residents to share their story about the rising cost of living. At the same time, we provided information about local resources that can help with various housing issues. We collected stories from street vendors, construction workers, day laborers and homemakers, from longtime Oakland residents, those displaced from other Bay Area cities, and from recently arrived immigrants.

Each of the 104 residents who stepped up to the microphone had a unique experience to share, but among them emerged larger stories of the hardships that immigrant families are facing. “Atrapados”—or “trapped”—is a word we heard often. Faced with rising rents and stagnant salaries, residents told us how they are stuck living in deplorable conditions, and forced to make dreadful choices. “One has to keep searching for another option or an extra shift at work to be able to cover the other bills,” said Beatriz. Another contributor, José, told us that he lives in the back room of a barber shop. While he didn’t complain, he did said he would like a more comfortable bed. Parents expressed their desire to move to a place where their children can play safely in the streets, or where they will have more room for a growing family, but there’s no affordable alternative.

What all of the contributors want is for their stories to be heard. As Rosa, a longtime homeowner who has seen her neighbors struggle, told us, “I’m not the person to resolve the problem, but I want our government to listen to the voice of residents so that they can do something.”

Below is a small selection of the stories of Oakland residents, in their own words:

I lived in San Francisco before, but I moved because of the rent that went up there in ‘98. I came to Oakland because it was cheaper here, but now it is through the roof. When I came, there was a lot of violence. It is a place they categorize as very dangerous to live. But I know that it is us who make it dangerous and it is us who live here who can make the difference. I don’t believe that the solution is to move from there but to live in a place where you feel comfortable. But unfortunately it is not that people are moving, but that people have to move due to the rent. It is expensive. I want to have my own house but here in Oakland, I don’t see that being possible. My family, they all live in Modesto, in Fresno because they can’t afford to buy a house here. It is very sad that we are forced to move. The Hispanic community is a community that is unfortunately low income and we can’t afford to pay. We love living in Oakland. There is a lot we can contribute, but the salaries are not going up.

As popsicle vendors, we are charged $200 per month on average for housing. Right there is the popsicle warehouse and that is where we live. Eight of us live there in a small hallway. It fits no more than a little bed to sleep on and above you can put a TV. And at the back is a small kitchen. I just go there to sleep. It’s a pigsty there. There are rats. It’s ugly. But necessity drives one to a path to support the family. In my case, I was a lawyer in Mexico, imagine that. But I came here because I couldn’t take the corruption. I couldn’t take it. I came here and find that I’m pushing a popsicle cart, selling popsicles, to send money back to my family.

I am 17 years old. I take out $250 from my salary every two weeks for my rent. The place where I live is a nice place, but going outside it is dangerous. What is it that makes it feel like home? My family is all there. The most difficult part of living there is that we are not comfortable. There are 12 people there. Each room has 4 people, and there is very little space. The whole place is really small for us, but it is still expensive, and because of that I have to pay my rent, and I am 17 years old.

The percentage [of our salaries] that we use to pay the rent is almost 100 percent because right now the rent is super expensive. The salary just isn’t enough right now to pay the rent. Apart from that, it is a very old place. It is not a very pleasant place, you can say. It is very dangerous. On the corner of where I live is a liquor store and there is always gunfire. Cars pass by really quickly, it is super dangerous.

I live where God forgot to pass. I live in an alley, and it is very ugly. This is where people go to leave the things they no longer use. It is like a dump. But my apartment is very nice and the owner where I live is a beautiful person. I have felt like it is home since I first saw it. I love how it is, its wood floor—the kitchen. I love that my neighbors are terrific people, and I love that when I come home there is always a dog waiting for me and my two children together at the end of the day.

To hear more stories from “El Tímpano: Vivienda,” come to Sights & Sounds of East Oakland—an event showcasing local stories on Sunday, May 20, from 6 p.m. – 9 p.m., at Red Bay Coffee, 3098 E. 10th Street, Oakland 94601. For more on the event go to Sightsandsoundslive.org. For more about El Tímpano go to Eltimpano.org.  “El Tímpano: Vivienda” was made possible with support from California Humanities, a non-profit partner of the National Endowment for the Humanities. Visit Calhum.org.