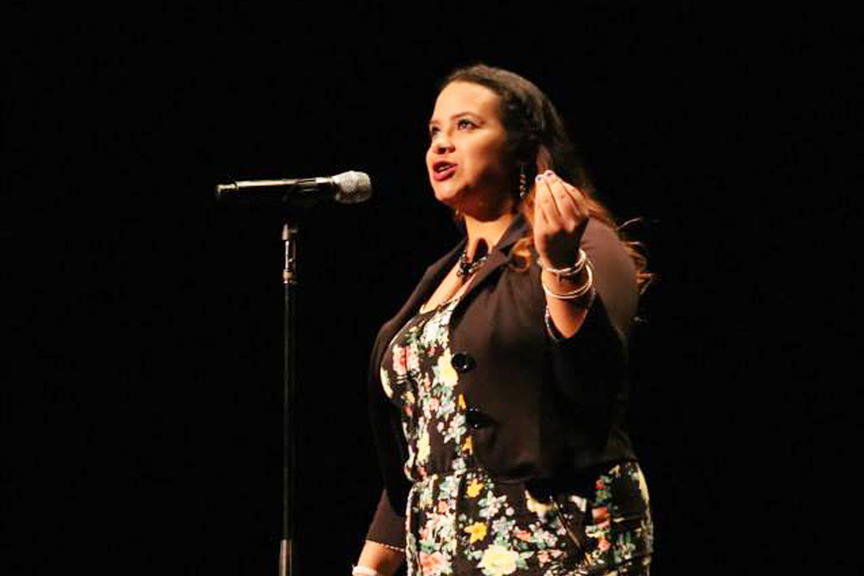 Riding in the back of a dirty old pick up truck, 8-year-old Brenda Quintanilla made the dangerous, two-month long trek from El Salvador to California for a chance at a better life.

Today, the 17-year-old Quintanilla shares the story of her own struggles as an immigrant through spoken word poetry, and stands as a voice for the undocumented youth in her Richmond community.

According to a Pew Research Center study from late 2014, California is home to approximately 2.45 million undocumented immigrants.

“Brenda has been very outspoken from the beginning … about the ways her family has been marginalized and the struggle that they have gone through,” said Molly Raynor, Quintanilla’s mentor.

Quintanilla has been a member of Richmond Artists with Talent (RAw Talent) since she saw them perform spoken word in her middle school cafeteria.

“RAw Talent is what opened my eyes to a whole new way of expression,” said Quintanilla.

RAw Talent, which Raynor co-founded, was Richmond’s first spoken word program. Raynor developed it to give the city’s youth and herself a creative outlet.

When Raynor first met Quintanilla four years ago, the program was just getting started.

“We weren’t super established yet,” said Raynor. “We were putting on poetry shows in the kitchen.”

Quintanilla entered RAw Talent in the 8th grade without any previous poetry experience. She immediately began writing and performing poems inspired by the social injustices she was exposed to around her community.

“I used that as a time to express myself and what I think about different social issues, and then I always make a personal connection to it,” she said.

Her poems are based on a wide range of topics including immigration, women’s issues and equality.

Last year, Quintanilla became the youngest of three Richmond Poet Laureates, who will represent the city over the next two years. The Poet Laureate program was brought to Richmond to raise the profile of poetry in the community and make people aware of spoken word, according to Michele Seville, the arts and culture manager for the city of Richmond.

“What stood out about Brenda was her passion and storytelling ability,” said Seville. “Many people in Richmond are immigrants and we felt that this was a much needed voice.”

To get her message out to a wider audience, Quintanilla signed up to compete in Youth Speaks Teen Poetry Slam, an annual poetry competition that is open to Bay Area youth. The winners represent the Bay Area as a team at the Brave New Voices (BNV) Festival where hundreds of young poets unite from all over the world to celebrate their voices.

For four consecutive years, Quintanilla has competed in the slam, getting one step closer to make the team each year. “I don’t think I had ever set my head so hard on something. I was so focused,” she said. “I knew what I wanted and I knew I had to fight to get it.

On March 21, Quintanilla, along with 17 Bay Area poets, performed at San Francisco’s Nourse Theater for the Grand Slam Finals.

Historically, the City of Richmond had never had a representative from their city make it to the BNV team. But for the past four years, at least one RAw Talent member made the team. This year, two RAw Talent members representing the City of Richmond were selected for the five member team. Brenda Quintanilla and Jamaya Walker will go on to Atlanta to represent the Bay Area in the national competition this summer.

Beyond the competition, Quintanilla will be the first in her family to attend college in the fall. She has recently accepted her admittance to Loyola Marymount University on a full scholarship where she will major in political science.