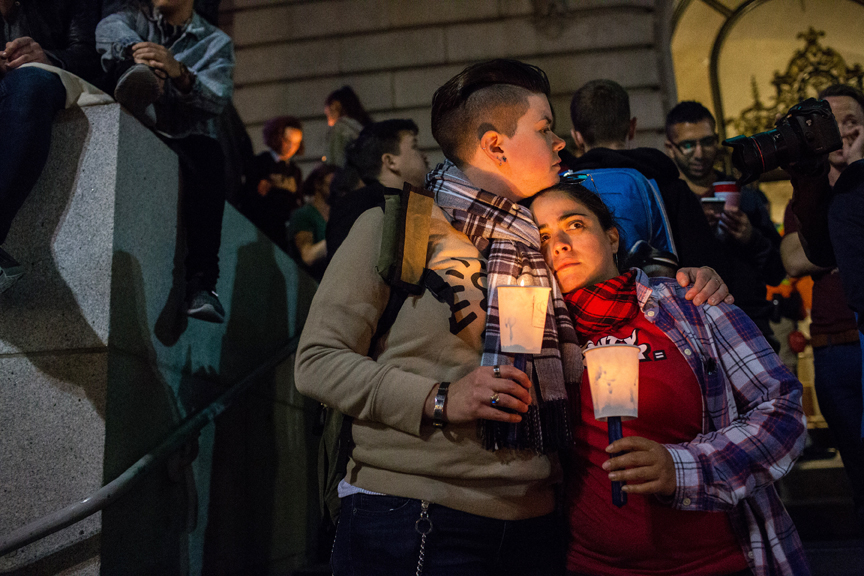 Homophobia: The last resort of the unimaginative mind

On Sunday morning, June 12, 2016, many of us woke up to the horrific news of the mass shooting at Pulse Nightclub in Orlando, Florida, which happened on Latin Night during Pride Month. We learned that Omar Mateen murdered 49 people overnight. It still is one of the deadliest mass shootings in U.S. history.

In San Francisco, like in many cities across the country, memorials and vigils were organized that day. I was part of a group of Latinx individuals who insisted that our voices heard since we were not included from the very beginning of the planning of the event happening in the Castro, San Francisco’s historic gay district. Much to the chagrin of the organizers, I voiced our frustration from the stage after we were finally included in the program.

It’s understood that for queer individuals of any race, the idea of being attacked in a “safe space,” like a queer bar, would chill to the core. But initial news reports seemed to ignore the fact this happened on “Latin Night,” thus erasing the reason why these targeted nights exist. Latin nights are spaces to congregate, not just to celebrate our queer selves, but also spaces to celebrate our very latinidad. They are spaces to revel in our totality and not be forced to choose between one or the other, as can happen both in predominantly Latino space and predominantely LGBTQ spaces.

Despite very publicly raising awareness of the initial lack of inclusion the following year, a San Francisco memorial was once again created without the initial input of the Latinx community. A mere two days before the event, an organizer reached out to the Latino Democratic Club asking for our sponsorship. The program was to be a part of the nationwide #HonorThemWithAction campaign. It was explained to me there would be no formal speaking program, but there would be an “open mic” and attendees would be encouraged to write action pledges on post-it notes, which would put up on boards for people to photograph and share on social media with the hashtag. As co-president of the club at the time, I balked at the idea of a program that did not center on the voices of people of color. Any vigil or memorial that does not center on or push to the forefront the voices of queer and transgender people of color (QTPOC) is not a true vigil or memorial. I also was not happy at being asked so late in the game to “participate.”

And this year, I took issue with being asked to rubber stamp an event where my joteria community had no input in its creation, despite the fact that the victims of the Orlando Pulse massacre were mostly queer Latinx and Afro-Latinx individuals.  To be transparent, an organizer reached out to me a month in advance as a heads up. He said was going to add me to an email chain, but there was no follow up until I was contacted to get Latinx organizations and individuals names on a press release before we even saw its contents. We were also asked to endorse an event whose format we knew nothing about. Given my current capacity and annoyance level, I declined to participate, but I did forward the request to my circle of Queer Latinx leaders and activists. Unfortunately, many didn’t like the last-minute request either.

The event went on, but the lack of Latina/o organizations on the Facebook event listing did not go unnoticed. One individual posted a question as to why they didn’t see Latinx names, which prompted a discussion about representation among other commenters, a discussion that held organizers accountable while remaining civil. The comment—along with the responses—was removed, which only further caused suspicion of the organizers and their apparent lack of respect for our voices.

So, knowing all that has happened since the very first vigil, how do we get beyond distrust and finger pointing and proactively move forward together?

I reached out to newly elected District 8 Supervisor Rafael Mandelman to request that we, the LGBTQ Communities, do a proper vigil and memorial next year. For me, this means the minute the idea to organize the 2019 event begins, real outreach needs to happen to include Latino and other POC voices.  An actual meeting should be set for individuals to gather and share ideas as email conversations can not only be cumbersome but also be lost. Whatever programming comes from it must focus on POC and speakers should represent a range of ages and feature “newer” voices as well as the same old same old.  Organizers will need to exhibit true leadership by elevating others over themselves.

We must not forget the victims of Pulse

An altar for Orlando