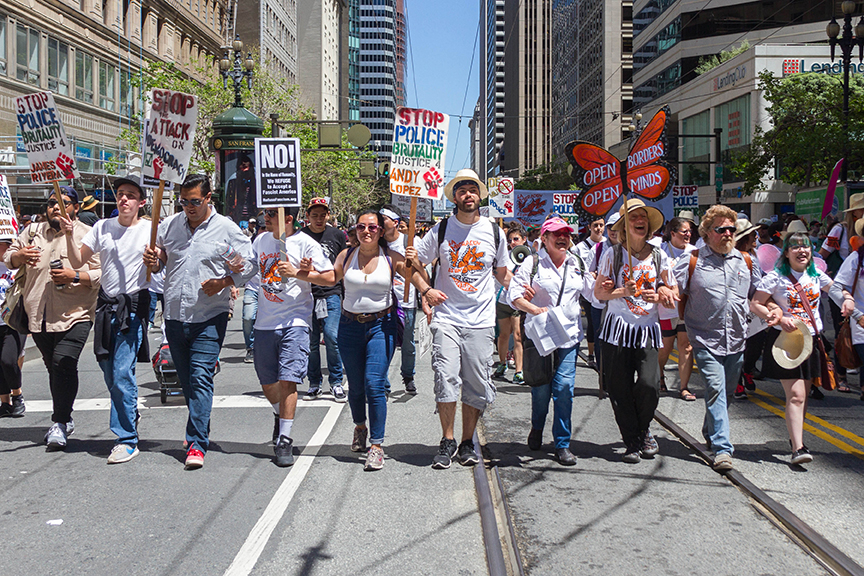 I am writing this column the day before a nationwide demonstration that has been named “A Day Without Immigrants.”

It coincides (well, not a coincidence… it was planned that way) with the celebration of May Day, also known as International Workers Day, a day for workers all over the world to celebrate the contributions of the working class and labor in general.

As mentioned before in this column, the leadership of this country has historically aligned with those who own the means of production. They have sought to suppress any celebration that invites the workers in the United States (where May Day originated) to form alliances—real or symbolic—with workers from other countries.

Instead, U.S. workers are sold the idea that, being workers here, in “the land of the free,” is so much better than being a worker anywhere else. The natural solidarity and collaboration that should exist between workers here and internationally is not fostered.

Just yesterday, our Pussy Grabber in Chief, the least educated and prepared leader this country has ever had, threw his support behind “Loyalty Day.”  “Loyalty Day” also called “Law Day” falls on May 1. It was first observed in 1921 as “Americanization Day,” a counter to May Day and the way it’s celebrated in other parts of the world. The celebration of “Law Day” and “Loyalty Day” do not usually attract large numbers of people, although in 1930, about 10,000 Veterans of Foreign War members staged a rally at New York’s Union Square, to promote patriotism.

The emphasis on patriotism, loyalty and “Americanization”—a term that clearly invites definition and further discussion—smacks of jingoism. A jingoist, according to my faithful Webster’s dictionary (a precursor of Google), is “a person who boasts of his patriotism and favors an aggressive, threatening, war-like foreign policy; a chauvinist.”

So, let those people who fall in line with the Twitterer in Charge, celebrate their “Law Day,” or “Loyalty Day”…or “Americanization Day,” whatever that means. We will celebrate in a different manner and I know that our march will (by the time you read this, the march is in the past) be awesome, inclusive, joyful and multicultural.

Initially —according to what was told in today’s meeting— there were nine people at the ANSWER Coalition, that large, welcoming place in the heart of the Mission. Today, when we held our last meeting of the May 1 Coalition, close to 30 people were there.

Of course, those organizing meetings were only part of a much larger and more intense effort.

There had been meetings to plan for security, others to paint banners and signs for the march, meetings to rehearse the chants and the steps that some of us would be using on May 1.

Besides those, there were meetings to plan the actual day—the rally at Justin Herman Plaza, the march itself (security for the children was declared a priority),  choosing the speakers at both Justin Herman Plaza and at Civic Center (not an easy task), the bands and dancers who would serve as a welcomed addition to the many speakers, plus meetings within each group marching. Then there were work meetings to design t-shirts, posters, make puppets, buy water—meetings to plan press conferences, radio and television programs in which to appear… and so much more. I get tired just thinking of the effort.

I spoke with Roberto Hernández, who chaired and was the main person holding it together for the core group of organizers. He remembered that many years ago, a similar march in defense of immigrants had been far less inclusive. That also was the reality of the organizing of it. There were few women in the organization of that event, no Muslims, very few African Americans or Asians. It had been, mainly, a Latino event.

In 2017, the May 1 Coalition was a varied, multi-ethnic and multi-gendered group. There were an equal number of men and women in attendance, with workers from all professions, from janitors to college professors, doctors and bus drivers.

Chicanos were at the heart of it, but Latina and Latino immigrants were key participants. From various countries of the continent: Ecuador, Peru, Chile, Guatemala, Mexico, Nicaragua and Bolivia. The Anglo-Americans were also present and important. Besides that variety in nationalities, there were different political ideologies. Not radically different, but different enough that could cause problems.

But no such problems appeared. When I asked him what impressed him the most about the 2017 May 1 Coalition, Roberto Hernández said: “The unity that we created, the love that was shared, the absence of that sometimes odious separation between Chicanos and Mexicanos. The main concern, for all, was the defense of our threatened immigrant communities!”

Indeed, the need to connect was palpable. The organizing was empowering. “People felt stronger and more united than I can ever remember,” said Roberto.

There were so many good vibes shared, that one of the main concerns at the end was: “What do we do next? When is the next event? Let’s form another Organizing Committee!”