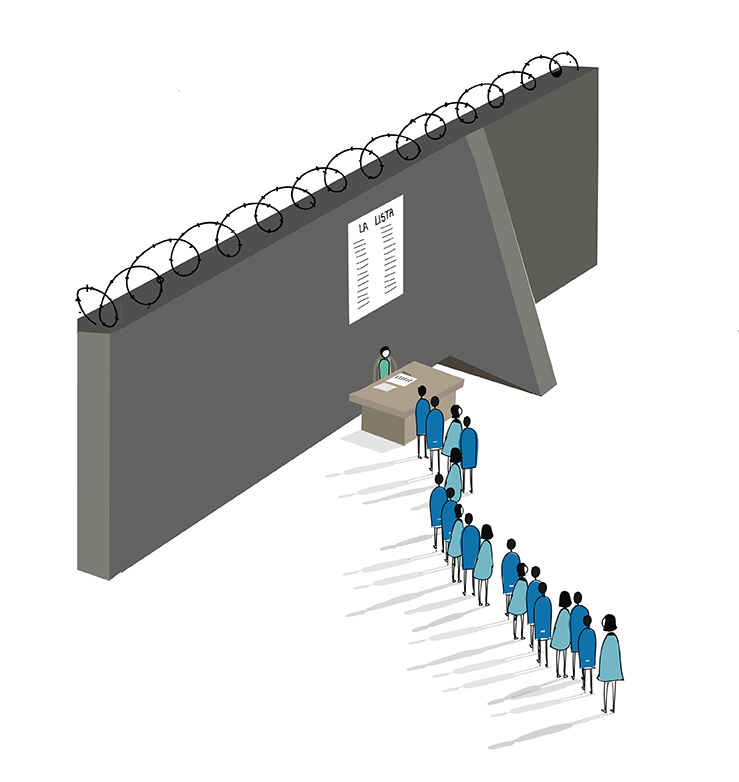 Jill Stanton is a retired immigration attorney who recently returned from a second volunteer stint in Tijuana, Mexico,  helping asylum seekers while volunteering with Al Otro Lado (AOL). In this second of a two-part series, Stanton breaks down the infamous “Lista.”

Here in Tijuana, the only process at present that gives asylum-seekers an opportunity  to surrender themselves to U.S. authorities at the border, is through a metering system. Potential asylum-seekers must be enrolled on “La Lista,” a list maintained by the Mexican migration authorities, known as Grupos Beta. They recruit helpers—volunteers from among the migrants who are already registered and are waiting for their list number to be reached—to process the new asylum-seeking individuals and their families who arrive each morning at “Chaparral,” more formally known as Ped West, the western-most pedestrian entrance to the U.S. which links Tijuana to San Ysidro, California.

“La Lista” has now reached the number 2,769. Each number represents 10 people, and represents the number of migrants who have been able to present acceptable identity documents for themselves and family members to the list of volunteers and the Grupos Beta authorities. There is no legal authority for this metering system, but it has remained in place because it serves the purposes of CBP to assure that only a small, seemingly arbitrarily chosen number of asylum-seekers, will be permitted to pass into their custody each day. On July 31, only 31 people whose names were on La Lista were permitted to cross. On Aug. 1, it was 41.

Because of Mexican migration policy, unaccompanied minors under 18 are unable to get their name on the list, and have to be brought to PedWest by AOL volunteers to surrender to the U.S. border officials who examine visitors at this pedestrian entrance. The volunteers have been harassed and threatened by CBP.

As of Aug. 1, 2019, 37,590 people had signed onto La Lista in Tijuana since its initiation this past winter. In other words, 3,759 numbers had been given out. The people who crossed on Aug. 1 signed onto the list on April 9 or 10 and had almost a four month wait to cross over. Along the entire southern border, there are reportedly some 25,000 MPP  migrants waiting; nearly 13,000 of their cases have already been filed with the San Diego immigration court.

The Grupos Beta agents who supervise the list sometimes reject identity documents for spurious reasons, and will not allow some migrants to put their name on the list. For instance, the identity document of a man from an African country was rejected because, he was told, the photo did not look like him.

Asylum-seekers whose numbers have been called on a particular day are taken in a Grupos Beta van to PedEast, the CBP entry point a few miles away. Once in CBP custody, the migrants are placed in the “hielera” (icebox)—a detention holding cell which is deliberately kept at an uncomfortably cold temperature—for a stay that varies from 2-3 days to 2 1/2 weeks. Food consists of one sandwich or a burrito, three times a day. Adults are allowed only one layer of clothing; children are permitted to have a second layer. They will sleep on the floor with mylar “blankets” nearly on top of one another because of limited space.

At the end of their “hielera” confinement, the migrants will be separated into two main groups. Those who are nationals of Spanish-speaking countries, except Mexico, will be designated as MPPs (Migrant Protection Protocols) and will be processed and returned to Mexico to await Immigration court dates. CBP officers will conduct only basic intake interviews with MPPs, rather than the “credible fear” interviews, which the rest of the Tijuana asylum-seekers will have. The interview is recorded in a Q&A form and reflects both the bias of the interviewing CBP officers and their disinterest in the long asylum narratives that the migrants try to relate. Many Q&As have the asylum-seekers responding that they came to the U.S. to work, while saying virtually nothing about their asylum claim.

The actual “credible fear interviews” are normally conducted by U.S. Citizen and Immigration Services (USCIS) Asylum Officers once the non-MPP Tijuana asylum-seekers are transferred from CBP custody to ICE detention facilities. Mexican nationals seeking asylum are not included in the MPP program, because they are afraid to return to Mexico, and instead will be kept in detention with Tijuana migrants who are mostly from Africa, largely from Cameroon. Those migrants that seek to cross over in Tijuana rarely include citizens of Asian countries, or Brazil, but have included (the now-infrequent) Haitian.

Before the CBP transfers the designated MPP migrants back to Tijuana, they will be given a Notice to Appear in the San Diego Immigration Court for a master calendar hearing, which will probably take place two to four months later.

On the day of their hearing, migrants with court dates must arrive at the Chaparral/PedWest entry point at 4:30am to cross into the U.S. and will be transported to San Diego for a 9am court appearance. At the end of the day, they will be transported back to Tijuana, to await their next court date.

What happens at the first master calendar hearing varies, depending on which of the four San Diego-based Immigration Judges is handling the case. All asylum-seekers (called “respondents” in the courtroom) are asked if they have legal counsel, and if not, whether they want additional time to obtain counsel. Even if, knowing that it will be virtually impossible to secure representation, the asylum-seeker asks to proceed without an attorney, some of the judges will insist that they try harder, and will continue their case.

All will be instructed to submit a completed and complex asylum application form (I-589) in English providing the legal basis for their asylum claim. At a second or third master calendar hearing the judge may take pleadings, which means the respondent must admit or deny the allegations of illegal entry and removability. Eventually, the judge will set a court date for an individual “merits” hearing—a trial—which will likely be many months away. Judges have been scheduling two hearing times per day, but warning applicants that multiple asylum-seekers will have the same slot (in case some don’t show up), and therefore it is entirely possible that their individual hearing may be rescheduled for a far-off future date. Thus, for most current applicants, the process from first to last court will likely take far more than a year, during which the MPP asylum-seeker must remain—often without any resources and in dangerous circumstances—in Mexico or elsewhere.

The court documents given to applicants by CBP, called Notices to Appear (NTAs), are largely defective—the checking of one of the three boxes delineating whether one is an arriving alien, present in the U.S. without inspection, or lawfully admitted but removable, are being deliberately omitted on many NTAs. Nevertheless, Immigration Judges are taking pleadings and moving forward on these cases, based on the factual allegations and charge of removability.

No San Diego immigration court merits hearing of a “remain in Mexico” MPP asylum -seeker’s case has yet been held—the first of these final hearings are scheduled for October, 2019.  However, court proceedings for more than 1,000 MPP cases have already been terminated, either because the respondent failed to appear (e.g., gave up because she couldn’t remain in Mexico, or found Mexican employment and decided to remain there, or never received notice of a changed hearing date, or the NTA was deemed defective). As reported in the New York Times (8/4/19), of the terminated cases, only 14 respondents (1.3 percent) had legal representation. In the 12,997 cases yet pending, only 163 (1.3 percent) were able to file asylum applications with legal assistance. To estimate the chances of success for MPP respondents, the following statistics should be taken into account. In 2018, before the MPP program was initiated, when all asylum-seeking respondents were residing in the U.S. ( whether detained or not) only 37 percent were able to secure legal counsel and less than 20 percent of Central American asylum cases were granted.

Most all non-MPP asylum seekers surrendering or caught crossing through Tijuana or elsewhere on the California-Mexico border, are transferred to Immigration & Customs  Enforcement (ICE) detention centers anywhere in the U.S. There they will have “credible fear” interviews (CFIs), albeit telephonically, with USCIS Asylum Officers. The time frame between their arrival at the detention center and the CFI interview varies widely, from a few days, to over a month. If successful, the applicant will either remain in detention until the master and individual hearings in the nearest Immigration Court are concluded, or she will be released to a sponsor, a relative or friend who has U.S. legal status and permission to work in the U.S., and will be ordered to check in with the local ICE office.

In Arizona and Texas, as currently as July, Central Americans and other migrants with children were initially processed by CBP at the border, and released to the homes of sponsors, throughout the U.S. Their CBP paperwork included ICE report dates, and Notices to Appear in a particular immigration court, but without a date yet set for a first appearance. In Arizona, adults were additionally equipped with ankle bracelets to monitor their whereabouts. However, since March of this year, when the MPP program was expanded to Texas, asylum-seekers returned to Mexico from El Paso, and now Laredo, have experienced the same difficulties and injustices as those experienced by Tijuana MPP migrants.

What is most hopeful, in a seemingly hopeless situation, is the continuing advocacy and dedication of hundreds of attorneys, paralegals, and volunteers from organizations at, or assisting in, services to migrants in border areas— Al Otro Lado in Tijuana, RAICES in Texas, Catholic Legal Immigration Network, Inc. (CLINIC) countrywide, Immigrant Defenders in Los Angeles, Proyecto Corazon, Immigrant Resource Legal Center ( ILRC), and many more.

If you are wondering how to help, and you are an attorney, or proficient in Spanish, even if you do not have immigration law experience, consider volunteering at Al Otro Lado in Tijuana, or RAICES in Texas. Fundraising, especially to benefit Al Otro Lado in Tijuana, is especially needed; this wonderful non-profit desperately needs more staff to assist and represent the Tijuana migrant community. For more information about volunteer opportunities visit alotrolado.org

Beyond DACA: How advocates are fighting back and what you need to know