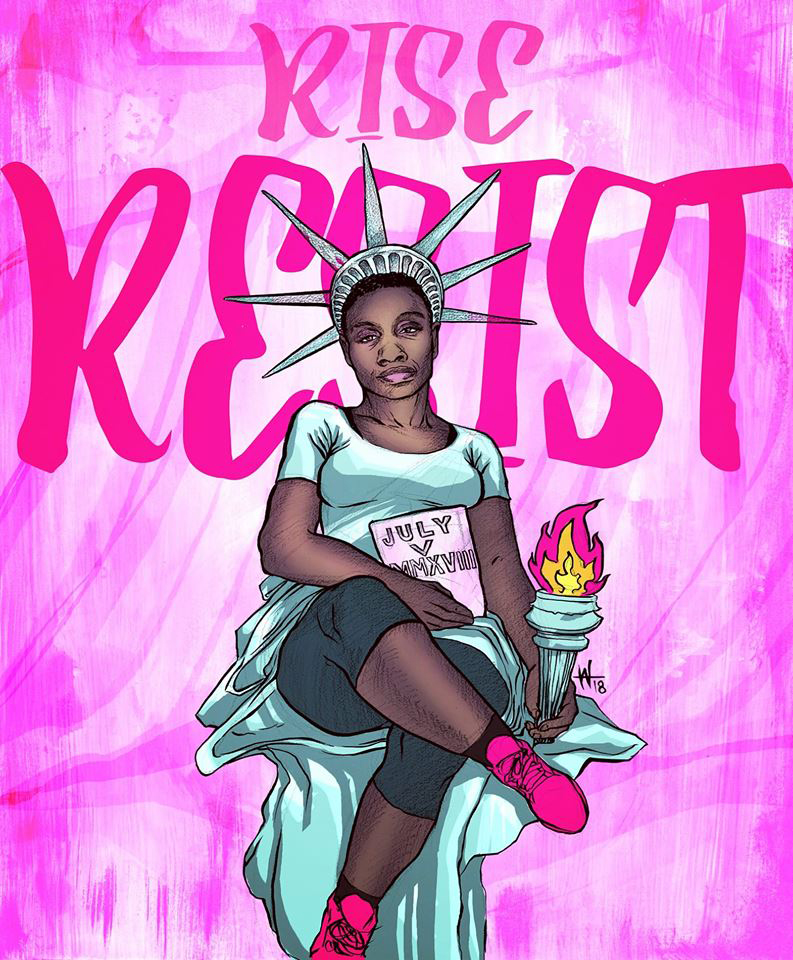 Unsettled in the Mission: Renegade

Give me your tired, your poor,

The wretched refuse of your teeming shore,

Send these, the homeless, tempest-tossed to me,

I lift my lamp beside the golden door.

Emma Lazarus (Printed on the Statue of Liberty)

A righteous indignation has risen in reaction to the imprisonment of immigrant families and the separation of parents from their children. And a mass movement is now forming against the racism being spewed by #45 and his administration’s policy of “zero tolerance” which was allegedly created to safeguard our borders from a relentless invasion of illegal immigrants.

Never mind that these immigrants are desperate human beings, running from oppression, hunger or a very possible death. Never mind that they might be fleeing conditions that the United States helped to implement by force in their sovereign countries, over the last 100 years.

Never mind that even the MS-13 gangs that Trump uses to justify his harsh immigration policies are also a result of the havoc in Latin America created by the interventionist policies of the United States. Those gangs were actually formed in the United States—many of them in Southern California—after a wave of immigration of Central American families, who were displaced from their countries by U.S. foreign interventionist policies.

These families, many of them fatherless, left their countries and found themselves unwelcomed in the so-called land of the free and the home of the brave! Most gangs were created as a form of self-defense, a refuge from the harsh street life that kids encountered in a new and foreign country. Eventually, many gangs became violent and lawless.

The U.S. helped to create the conditions and then failed to help those who suffered the results. Never mind those words printed on the Statue of Liberty, quoted in the opening of this column. Recent events reveal their hollowness. Those tired, poor, huddled masses yearning to breathe free are not being welcomed by Lady Liberty. Her lamp is not lit and there is no golden door!

However, a bright light did appear on that statue, lit on the 4th of July by an immigrant activist named Therese Patricia Okoumou. Okoumou is a 44-year old immigrant from the Democratic Republic of the Congo, who climbed onto the Statue of Liberty on July 4 as a protest against the above mentioned zero tolerance policies.

She said that she would not come down “until all of the children are freed.” She was referring, of course, to the more than 2,000 children who were separated from their parents at the border and are currently being held in cages.

Zero tolerance is a cruel, inhumane policy. Its three most visible creators and implementers, President Trump, his aide Stephen Miller and his Attorney General, Jeff Sessions, are also cruel and inhumane. Of course, what can be expected from men who have clearly lacked love and empathy in their lives?

To begin with, Trump does not even know how to shake hands in a normal manner! He pushes people around, large and small. He seems to have never learned to the meaning of humility and common respect. Miller exudes disdain and bitterness. He looks like someone who, if he bit his own tongue, would die from being poisoned.

As for Jeff Sessions, he enjoys quoting the Bible to defend his evil doing. There, he feels that he has found that law is clearly above justice. But there are many with more expertise on the Bible than I, who say that his quotes are misinterpretations and half-truths.

Against these men and their evil policies, we need to form well-educated multicultural alliances. In these dire times, when it sometimes feels as though we are getting close to the abyss, we need to create new consciousness.  We need to transcend our differences and learn from them. We need each other. We need allies.

“We know better,” a friend recently told me. “People of color know their history better!”

I am not entirely sure of that. We all need to learn our true and hidden histories—from Blacks to Whites and in between… and we need to understand that history is not monolithic and it is not only located in the past.

We all can make a new history, a multicultural history. We have to try!

Eduardo Galeano, the celebrated Uruguayan author, said: “If the past has nothing to say to the present, history may go on sleeping undisturbed in the closet where the system keeps its old disguises.”

It might not be a comfortable process, the digging up of “the secret history of the people.” Many might fear losing their privileges. Many might simply be too afraid to poke the gigantic monster, but we need to do it—especially those of us who live in the entrails of the monster.

Eventually, the time will come when the words that adorn the Statue of Liberty will ring true. Those children who are still being held in cages demand our effort!