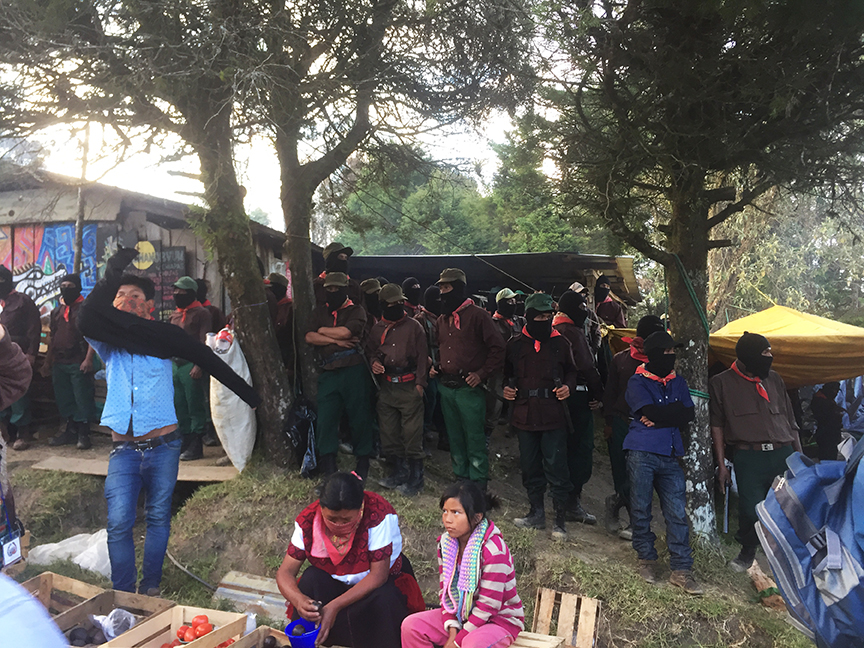 As we transitioned into 2017, I had the privilege of visiting Chiapas, Mexico to celebrate the 23rd anniversary of the Zapatista uprising. Being near the completion of my doctorate in clinical psychology, I spent much of 2016 wondering how to integrate my experience in the mostly Eurocentric psychological community in San Francisco with Indigenous perspectives and activism. Chiapas was the perfect space to develop the questions further.

Especially after the events of 2016—Standing Rock, continued police brutality, the U.S. election—this opportunity to explore an important part of my ancestral being, historical interest and humanitarian commitment couldn’t have come at a better time. Fortunately, a group of social activists from California Institute of Integral Studies (CIIS) welcomed me on the trip, and during the first night, I was introduced to the concept of “liberation psychology.”

The origins of liberation psychology begin in the 1970s with Ignacio Martín Baró, a Salvadoran Jesuit priest and social psychologist. For Martín-Baró, traditional psychology was not relevant because it was applied neutrally and was too narrowly focused on individuals, not societal living conditions.

Liberation psychology places oppressed individuals and marginalized communities within their socio-political contexts, with the goal of raising consciousness of structural oppression in a progression toward becoming physically and psychologically liberated.

I am one of countless persons of mixed blood in this hemisphere. I will continue to experience challenges to my identity as I continue to recognize how I embody the colonizer(s) and the colonized. Exploring pre-Columbian art, history and religion has always been a way to reclaim that part of myself that has nearly disappeared as a result of colonialism.

For me, this awareness began when I was a teenager. Feeling that my psyche didn’t belong in the modern commercialized world, I sought expression in ancient art and history. My developing awareness eventually manifested in my seeking to blend psychotherapy and liberation psychology.

For the Indigenous communities that were experiencing “concientización”—a process of individual and community awakening to socio-political impacts on the psyche—the struggle has never been safe, and has always been about survival as persons and as cultures.

I was inspired by documentaries and writings about Zapatismo in the lead-up to the trip. It’s always difficult to study detailed accounts of violence and oppression that Indigenous peoples in the state of Chiapas (and Mexico in general) have faced—an oppression that grows to this day under the guise of capitalism, corporatism and neoliberalism.

But, for every act of colonization, there was, and continues to be, resistance, the Indigenous and their allies fighting for equity and justice. The Zapatistas had to tap into this deep-rooted ancestral need to fight, or the communities would risk the continuation of intergenerational trauma at the hands of the oppressor.

The religion that was used for colonizing actually became an important tool in the 1994 uprising. During his tenure, Bishop Samuel Ruiz of the San Cristóbal de las Casas diocese preached “liberation theology” to the indigenous peoples in Chiapas. In liberation theology, as opposed to the hierarchical structure of the previously enforced Catholicism, individuals have power to create their own destiny and are encouraged to confront social injustice (as Jesus did).

This message resonated with the Indigenous Maya of the region who had long been actively oppressed by the federal government. The EZLN followed up the message of self liberation with an argument for armed confrontation, since turning the the other cheek was resulting in the ill effects of the North American Free Trade Agreement (NAFTA).

The Zapatistas put down their arms a long time ago at the request of the people of Mexico, just as the the government was forced to pay attention to their populist message. They knew then and know now that, as social reality becomes more and more clear, it is necessary to listen to oppressed persons, whose voices have been excluded by the dominant neo-colonial forces of capitalism. This value—“mandar obedeciendo” (to lead by obeying)—is an essential tenet of the EZLN and liberation psychology.

My journey into the mountains

The group I traveled with had the opportunity to attend the EZLN hosted Conciencias por la humanidad at the Centro Indígena de Capacitacíon Integral – Universidad de la tierra (CIDECI-UNITIERRA).

This event was put together at the request of Zapatista youth who wanted to learn more about science and technology. The event hosted approximately 100 lectures on topics ranging from astrophysics, to harnessing solar energy, to palliative care for the sick and elderly. San Cristóbal de las Casas already felt like a platform in the heavens, and we were being exposed to secrets of the universe.

Nearly 50 Zapatista youth attended each lecture and shared notes among themselves. At the end of each day-long session, Zapatista comandantes shared a message of resistance, each with their own style of humor, storytelling, and serious calls to action.

We also traveled further into the mountains to the Zapatista capital of Oventik to greet the Congreso Nacional Indígena (CNI). There, the CNI announced that they would be running an Indigenous woman for president in the 2018 Mexico election. The EZLN, alongside the CNI, seeks to re-manifest the divine feminine in the world, an ancient way of being that has been nearly destroyed through the patriarchal ways of colonization.

Perhaps because my maternal lineage is Mexican, or perhaps because this was a moment that embraced a necessary trajectory in our world, this announcement was the one time in my life that I didn’t have to translate from Spanish to English in my head. And it was one of the most emotional experiences I’ve ever had.

Through my experiences in Chiapas, it became clear that Zapatismo is continuing to influence history. The Zapatistas maintain their own schools and health clinics on autonomous territories free from governmental control (though not free from governmental aggravation). The message of liberation, autonomy and rescue of the sacred Indigenous within the individual and within the community expands beyond the territories. It resonates throughout Mexico and throughout the world.

The EZLN and the Indigenous ways of being remain under threat, but they persevere in seeking liberation and autonomy for themselves and for communities around the world that have been subjected to the negative impacts of capitalism and neo-colonialism. I hope we can continue to express the same message right here in the Bay Area.

John Carson is a fourth-year student in the Clinical Psychology doctoral program at the California Institute in Integral Studies and is interning as a psychotherapist at the C.G. Jung Institute in San Francisco.