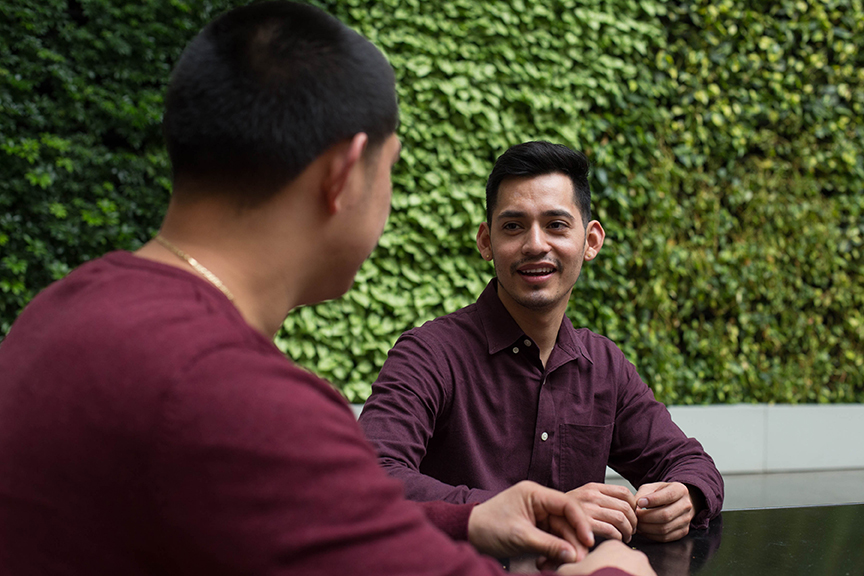 Although once an undocumented immigrant, Juan Manuel “Manny” Roa has managed to secure a job in the highly competitive tech industry despite his limited technical background.

Roa first entered the United States illegally in 2001 when he was 11, but returned to his hometown of Lázaro Cárdenas in the state of Michoacán, México in 2011 to pursue higher education.

After realizing that corruption and organized crime in Mexico were keeping him from growing professionally, as well as presenting a real threat to his safety, he returned to the United States in 2013 to be with family and friends.

But when Roa attempted to cross the border, he was detained.

Roa hadn’t crossed the border by himself though, he was part of an organizing effort by the National Immigrant Youth Alliance (NIYA), an undocumented youth-led network committed to achieving equality for all immigrant youth (theniya.org). The NIYA orchestrated a public border crossing by more than 30 undocumented young individuals that was part of the “Bring Them Home” campaign, which ensued from a similar, smaller event two months before.

The 30-plus participants entered at the Laredo, Texas port of entry, and were detained promptly after. Seven of them were released within a day, but Roa was held for a month. He participated in a hunger strike during that time, before being released on parole to continue his case outside of the detention facility.

Once he was released Roa entered a whole new world, one that came with its own set of challenges.

Roa’s first experience with a computer was in high school where he took a web technology class and learned the basics of the internet and email. Years later, he learned about Year Up’s technical training program in San Francisco, which presented him with other opportunities in tech. Through that program, Roa was offered an internship at Airbnb. At the time he debated accepting given the criticism that Airbnb was receiving for adding to San Francisco’s gentrification crisis.

“I almost declined the internship because I was unsure about the impact that Airbnb was having, especially in the Latino community,” he said.

But Roa quickly recognized that he had an opportunity to disrupt a space that has been notorious for being unwelcoming to people of color. Just as he had walked into a detention center and provided resources to immigrants who generally didn’t speak English or understand the scope of their constitutional rights, he was committed to infiltrating the tech industry and challenging the status quo.

At Airbnb Roa has helped facilitate thoughtful conversations about diversity and is part of “Juntos,” one of many “Airfinity” groups at the enterprise. Despite his budding career, Roa still questioned whether he belonged in such a niche space. Insecurity about not having a college degree, about his inexperience in the field and about English being his second language dogged him.

“I kept telling myself that I wasn’t ready or good enough [when I first joined Airbnb],” he said. But he has found community support through “Juntos” and continues to approach his work with the Latino community in mind.

In many ways, Roa considers Airbnb to be his college experience. He’s surrounded by a large network of high-potential professionals, and is validated by his teammates. He is learning the top leading technology, the ins and outs of the industry, and the technical skills that will only sharpen his work experience. Let’s not forget Airbnb’s cafeteria, the envy of university lunchrooms. The opportunities are many, and they are a reminder of the hardships he and his mother experienced when they migrated to the United States.

“My mom sacrificed so much. I crossed the border and now I have this opportunity. I have to run with it and just give it my best,” he said.

As Roa continues to dig deeper into the industry, he reflects on how much broader the talent pipeline of people of color can be. He is dissatisfied with diversity reports, and understands that companies including Airbnb have a lot of work to do (According to to Airbnb’s Employee Diversity and Belonging: 2016 Assessment, 6.5 percent of employees are Latino). Roa plans to continue to work toward broadening that pipeline in whatever way he can, even if it’s just leading by example.