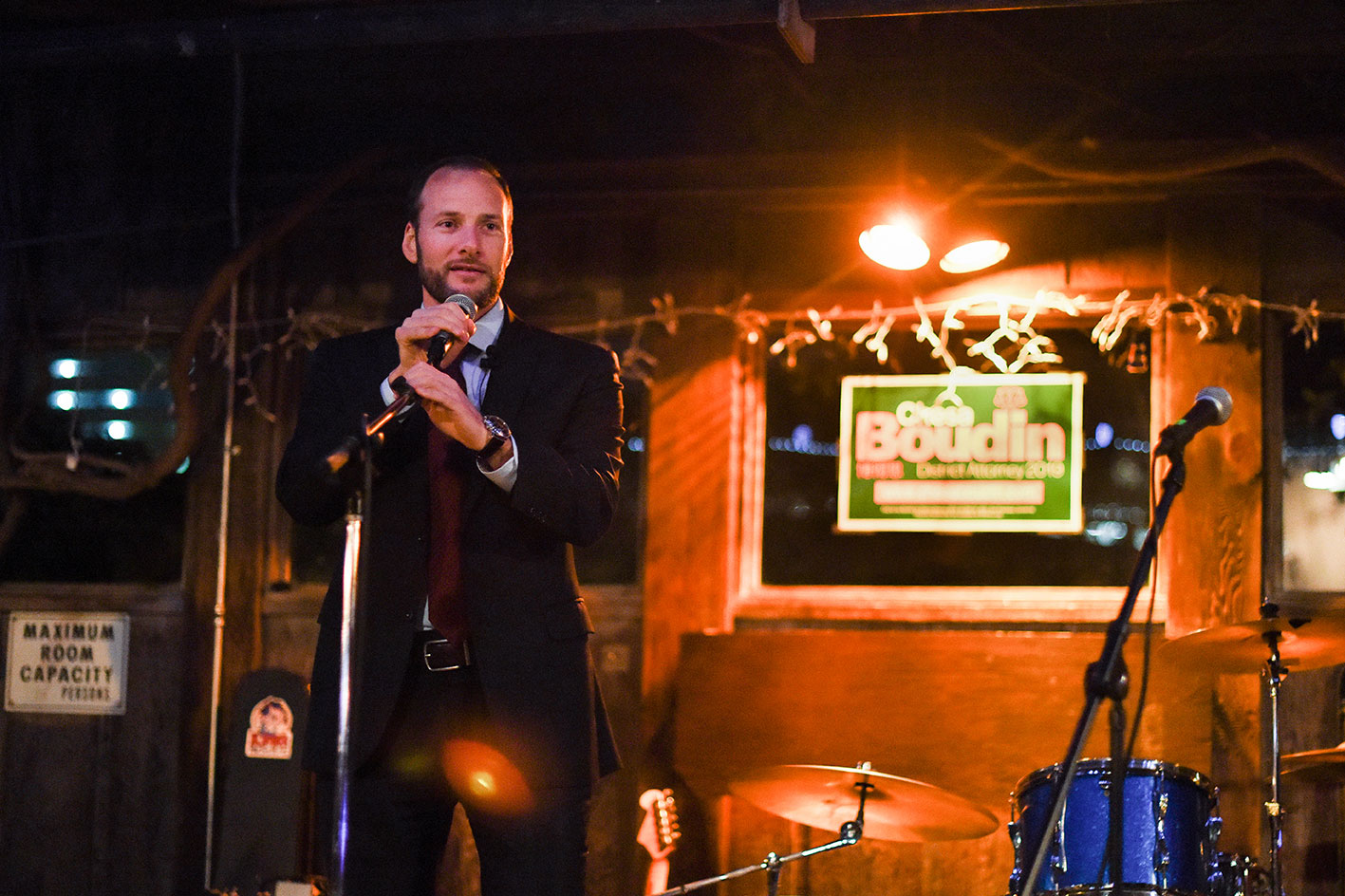 District Attorney is an incredibly influential public position, one with the power to influence criminal prosecution, enforcement and rehabilitation for a generation, power that is frequently under scrutinized and overly abused. Chesa Boudin—the young unapologetically progressive candidate for San Francisco’s District Attorney—is looking to use that influence to reform our broken justice system.

A public defender who was raised while both of his parents were imprisoned, he has been on both sides of the criminal justice system. Boudin is advocating for a “restorative” model of justice, focused on rehabilitation and reconciliation, as the best way to prevent recidivism (the tendency of a convicted criminal to reoffend).

Take the story of Lorenzo, which Boudin spoke about during a recent interview with El Tecolote. An immigrant who grew up visiting one of his parents in a maximum security prison, Lorenzo and Boudin met and became friends while they were both visiting their incarcerated parents. While he was a freshman at Yale, Boudin learned that his friend Lorenzo was arrested and imprisoned in the same cell block as his father.

“I saw two different cycles of incarceration,” Boudin said. “One was the narrower sense of recidivism, which was an individual going to jail, getting out and then coming back. I saw that in a couple ways … and I saw a second category of recidivism which I call ‘generational recidivism’ which is the kids who grew up in the circumstances I grew up in, themselves, ending up getting arrested and behind bars.”

Lorenzo’s story is an example of this second kind of recidivism.

“That kind of [intergenerational] recidivism is more explicitly indicative of the failure of our system to rehabilitate,” he said.

The roots for restorative justice

Boudin’s parents were affiliated with the Weather Underground, the left-wing activist group responsible for high-profile non-lethal bombings in the 1970s. Both were arrested when Boudin was just over a year old for their participation in a 1981 Brinks armored truck robbery, which resulted in the deaths of two police officers and a security guard. Despite the fact that neither David Gilbert (his father) nor Kathy Boudin (his mother) killed anyone, both received lengthy prison terms. (Gilbert is still in a maximum security facility, Kathy Boudin was released in 2003.)

His mother’s time incarcerated was vastly different than that of his father. His father spent his time at many different high profile maximum security prisons, among them Attica, Wendy, Comstock and Auburn. His mother spent her time at Bedford Hills that had “good rehabilitative programs.”

“Partly because it’s a woman’s prison, partly because it’s in Westchester County, which is very wealthy and gets a lot of resources and donations and volunteers from surrounding areas, but it meant that my mom was able to do things in prison like parenting classes, like literacy classes that she actually founded,” he said.

While his mother was able to get an education (she completed her master’s program while at Bedford Hills and helped teach AIDS education classes) his father’s time was and is much rougher.

“Over the years I would hear things about my dad’s friends or people I had met getting out and then I’d hear that they had gotten arrested again and gone back. The way I thought about that as a kid is: ‘Why is that happening? They’ve been punished, shouldn’t we be making sure that the way their punished ensures that it doesn’t happen again,’” he said.

Seeing this drastically different treatment forced the young Boudin to ask: “What caused this?” and, later in life: Why did he avoid the generational recidivism that many kids like him fell into? Answering these questions requires an understanding of the historical context, which Boudin attained while researching American criminal justice in college. He analyzed the factors of uprisings such as Attica and prison conditions in an attempt, in his own way, to fight for his parents, other inmates and other family members. This lead him to work as a public defender and ultimately to run for San Francisco District Attorney.

“I think it helps me to have a global perspective,” Boudin said. “To recognize that no matter where people come from, they have the same constitutional rights when it comes to criminal justice system and recognize that there’s a role that U.S. government and foreign policy played in why so many of these folks are here.”

Boudin’s fully grasps how lucky he was and has been instructed by that throughout his career.  His honest and direct accounting of his experience separates him from other candidates like Suzy Loftus or Nancy Tung or Leif Dautch. He has spent time experience both ends of judicial system and there’s simply no way to substitute the understanding of a prejudicial and predatory system.

The cost of our prejudicial justice system is being billed to the poor in the city through a bail system—similar to many other American cities—that lets capital dictate the terms of incarceration.

“I experienced this system as a public defender, when I saw my clients some of whom I knew were innocent, plead guilty simply because it was the only way they could get out,” he said.

Grappling with the injustices of a judicial system, and seeing it wrenching the lives of working class families, Boudin has worked to challenge the cash for bail system in the city.

“I started filing lawsuits, I started a bail unit in our office, I helped found a non profit in DC called Civil Rights Corp that challenges the use of bail all across the country. We’ve made tremendous progress getting judges and prosecutors to recognize that this a discriminatory system that undermines public safety.”

Incarceration from a lack of financial means is something disturbingly feudal and yet it continues across America. The cash for bail system is something Boudin seeks to end in San Francisco.

In 2012-13, Boudin was a driving force in persuading the SF Sheriff to stop honoring ICE holds.

He feels this was a good step, but only one of many that need to be taken. During his campaign Boudin has outlined a different approach to District Attorney guided by his view of restorative justice as a more effective way of rehabilitation than the current, punitive justice, approach.

Boudin says a restorative justice system will focus on “accountability and finding a way to undo or make right the harm that’s been caused,” while punitive justice focuses on “punishing someone who has done harm.”

This outlook is a key ideological distinction between Boudin and many others in our judicial or correctional systems. To put an overhaul like this into action is a grand and difficult task. It entails plaintiffs and defendants working together to understand the harm that was caused and find an effective solution to not only make it right, but also to ensure that it never happens again.

Justice long overdue in the U.S.

There are 2.3 million people incarcerated in the United States as of 2019, according to the Prison Policy Initiative. Of that massive national population, California has the second highest incarceration rate, per 100,000 people, of any other NATO country.

This is a problem rooted in the foundations of our judicial system, not some runaway freight train of a group of harsh prosecutors or judges. To remedy this kind of brutalization requires an entirely new outlook on justice, jail and punishment.

Continuing to reform a judicial system designed for punitive institutionalization will not stop or even slow the chug of mass incarceration in the United States. It is an overhaul that is needed.

Grand reforms of this kind aren’t done with one or even a few people, they take a mass populous. Philadelphia District Attorney Larry Krasner has taken up a restorative justice approach in, launching a “unit to investigate and prosecute scofflaw employers,” according to the Philadelphia Inquirer.

There is a question of how effective a District Attorney can be in terms of reformation of a system designed for prejudicial prosecution. From an equity standpoint, the position of District Attorney by its very nature is still weaponized against poor and working people. It is one tentacle of the giant squid that is judges, prosecutors, police officers, correctional officers and many more.

At the least, the focus of restorative justice by district attorneys and candidates across the country is a late but effective step in a direction towards a more equitable justice system.

Chesa Boudin’s campaign is a microcosm for the reformation that could overhaul our justice system from an archaic, backwards and brutal system of punitive punishment. It’s a chance—albeit a long shot, but a chance nonetheless—at making a real change for generations of people’s past, future and present. We must not miss it.