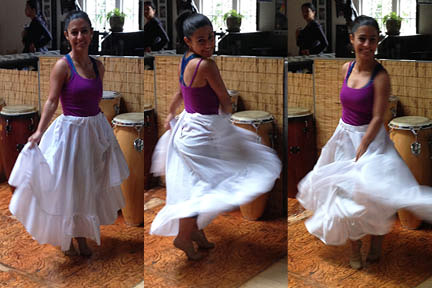 I asked Elizabeth Soberanes what a typical week looks like as she goes about the business of organizing the Latin Dance Grooves contingent.

“First of all there is no such thing as a typical week,” she said.

Each day brings opportunities to look into or problems to resolve. Thus, here is what an untypical week looks like for her.

Sunday, March 22: Carnaval rehearsal in the morning. Followed up earlier with Susana Arenas Pedroso and her drummers to make sure they made it to their first rehearsal. Distributed payment to artists. Met with Arenas after rehearsal to discuss choreography, introduce her to the volunteers, and discuss her costume.

Monday, March 23: Spent a few hours preparing the email blast for contingent members. Checked in with seamstress Erika Ipanaque on costume orders. Contacted Alice who is making white folkloric skirts for students who need them.

Tuesday, March 24: Reviewed Carnaval roster and costume orders. Worked with people coordinating orders before and after LDG Classes. Collected costume payments and inputted information into master roster. Worked with Ipanaque on a production timeline and assisted her in sizing and determining fabric quantities. Researched fabric vendors, stock and delivery times.

Wednesday, March 25: Met with fiscal sponsor, Acción Latina, to reconcile budget and turn in check requests for artistic staff; float, t-shirts, etc. Recruited a volunteer to serve as parade monitor leader. Taught the LDG Ensemble the first dance choreography so they could assist in modeling it at rehearsal.

Thursday, March 26: Researched and followed up on schoolyards for outdoor rehearsals. Followed up with graphic company working on LDG Carnaval T-shirt.

Friday, March 27: Met with Dana Kawano to discuss costume concepts for the queens who will be on the float. Met with artist/LDG dancer Soad Kader about hosting a workshop at her studio for LDG dancers to make bracelets and collars.

Took a breath and started the week over again.

This schedule doesn’t count the hours Soberanes spends thinking about the choreography and if anything needs to be modified. Or the dozens of other things that pop into her head in the middle of the night. Soberanes’ schedule also includes a day job, teaching two weekly LDG classes, working with the LDG Ensemble, taking dance classes herself, and performing in the CubaCaribe Festival with the Arenas Dance Company. Craziness, I tell you.

This schedule reflects a deep respect for dance, students and the collaborators. She wants to do right by them so she makes the time. She is not alone because with 50-plus groups in the parade there are many super human crazy-in-love-with-Carnaval organizers in the City of Love. I’ll write more on them in a future article.

A few Sundays ago I met artist Dana Kawano, who Soberanes hired to design costumes for the four queens. Kawano says she “escaped” the tech business world 15 years ago. Since she started her artistic journey later in life, she threw herself at everything possible: stone sculpting, painting, T-shirt designs and more.

She found her “sweet spot” in 3-dimensional art.

“Being able to see in 3-D is it’s own special thing,” she said. “Not everyone can look at something and then imagine all the angles and see the casted shadows.”

Costume art is her latest undertaking and her first project happened when Amara Tabor Smith of Deep Waters Dance Theater asked her to make pieces for her “Our daily bread” performance. Since then she has worked with Tabor Smith on other projects.

For LDG, Kawano is creating Cuban and Brazilian iterations for two well-known deities in the African Diaspora: Oshun/Oxúm and Yemya/lemanjá, the goddesses of sweet waters and salt water. Kawano is researching to learn about the attributes of the deities, such as their personalities and colors. She will meet with the four queens to get a sense of their energy and ask them to bring something to incorporate into the costume in order “to give it personal meaning and richness for the dancers.” Then she will ponder, conjure and mull before putting anything on paper.

Kawano views her role as helping artists deliver the message. And what a rich message that will be on Carnaval morning.