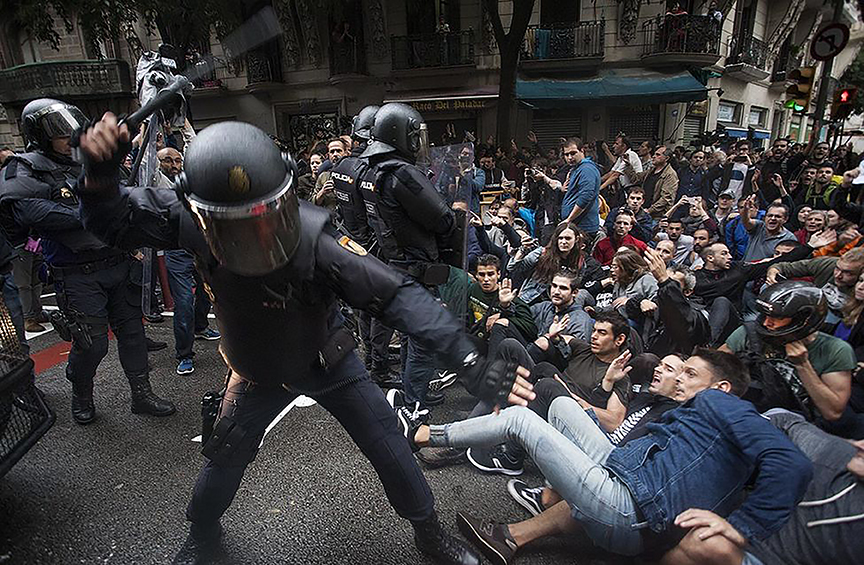 I’m Catalan. Seventeen years ago, I arrived in San Francisco for the first time and since then, I’ve been saddled between America and Europe. Although I came here with an open mind and without prejudice, my roots and culture were always with me.

I am among the first children born under Spanish democracy and I was lucky to grow up speaking my mother tongue, enjoying my culture without fear, learning about my history and literature at school.

In Spain, we hear closed-minded voices, often ignorant, denouncing that we are indoctrinating our children from their tender childhood. They don’t even understand that basking in your own culture from a young age is simply a right and freedom that should not be disparaged, much less stolen.

The search for Catalonia’s independence is not a recent whim, it has a long and complex history. Violent and ideological repressions have come and gone, from the Decree of Nueva Planta in the early 18th century that led to the total destruction of Catalan institutions, to the 1940 assassination of Lluís Companys—the exiled president of the Generalitat de Catalunya, which had years before declared the Catalan Republic.

On Oct. 1, 2017 Catalans took to the streets to vote in a referendum on said independence, a referendum that the government of Spain did everything in its power to stop.

The Civil Guard used violence in the form of clubs and rubber bullets against peaceful people, to silence the unity and voice of a people that was determined to exercise one of the most fundamental rights of a democracy: the right to vote.

“Today there has not been a self-determination referendum in Catalonia,” Spain’s President Mariano Rajoy said, hours after the whole world saw how the Catalan people had assembled to vote.

“Spain is a mature and advanced democracy, friendly and tolerant,” he said, once again after we had all horrifically witnessed how the Civil Guard acted violently against a crowd whose exemplary attitude screamed silently and peacefully: “We have the right to choose and the right to freedom!”

Much has happened since Carles Puigdemont, the president of Catalonia, declared the creation of a new Republic of Catalonia on Oct. 27. In response the Spanish government has enacted Article 155, which dissolved the Catalan Parliament. Puigdemont has been exiled and President Rajoy has assumed the power to govern Catalonia from Madrid. When the representatives of a people, who were democratically elected, end up with jail sentences, we should ask what direction Spain is taking and why Europe chooses to remain silent.

It may be that the Spanish Constitution prohibits a de facto referendum like the one they wanted to carry out in Catalonia. But it’s necessary to explain that this is an archaic constitution, written after the death of the dictator Francisco Franco, when Catalonia awoke from a new nightmare and when it was worthwhile to envision a self-government without having to jump through too many hoops.

Today in Spain we continue with the same Constitution written in 1978, but we have evolved beyond it. Totally obsolete, it’s the daughter of the circumstances of the time, of a Spain that emerged from a totalitarian dictatorship, working towards democracy, but still with an army and the ultra-right breathing in its pages.

Many say that the economic crisis has led us to seek independence, that an economic motor like Catalonia should be able to manage its wealth. They say it should not have to give all of its cake to the capital and receive only a bit of it, seeing how, in the hands of a corrupt political party, there are cuts in health or education.

Yes, the economic crisis has uncovered much of our political shame. It may have been the trigger for this peaceful revolution in search of an independent Catalonia, but it is not the cause.

Catalonia wants independence because it’s a community, a story, a culture, a language, a national spirit, a way of being that unites us—it’s more than an economic issue.

Any country that has belonged to the Spanish Empire in the past should understand that Catalonia is now in the same process of emancipation as other countries have been over the past 200 years, although evidently the circumstances are very different. Catalonia has the right to independence, the right to build a new state.

On the other hand, the process of independence is also a criticism of the system, and because of that you’ll find many voices for solidarity in Spain. In a country that has seen severe economic crisis for years, where young (and not so young) people are forced to emigrate in search of a better future, where banks and not people are rescued, where corruption is the order of the day, the current rejection of the institutions, monarchy and politicians has fueled this movement.

“We have suffered the Bourbons [the royal family that held throne in Spain in 18th century], threats, lies, conspiracies, insults and, now, violence and censorship. But a united people isn’t so easily quieted. We continue to write history and with this referendum we have kicked off a peaceful revolution. In a modern democracy, the right to speak, to choose and vote should not be a crime.”

The people of Catalonia are willing to suffer today in order to give their children a chance at a better future, they are a peaceful people who honor their history, who are proud of their culture and want their own state. Catalonia is at the forefront and close to its historical desire, we’re writing a new and exciting page, and it’s very clear that repression will never silence those aspirations. We walk firm towards our goal.

Local Flamenca dances to her own beat