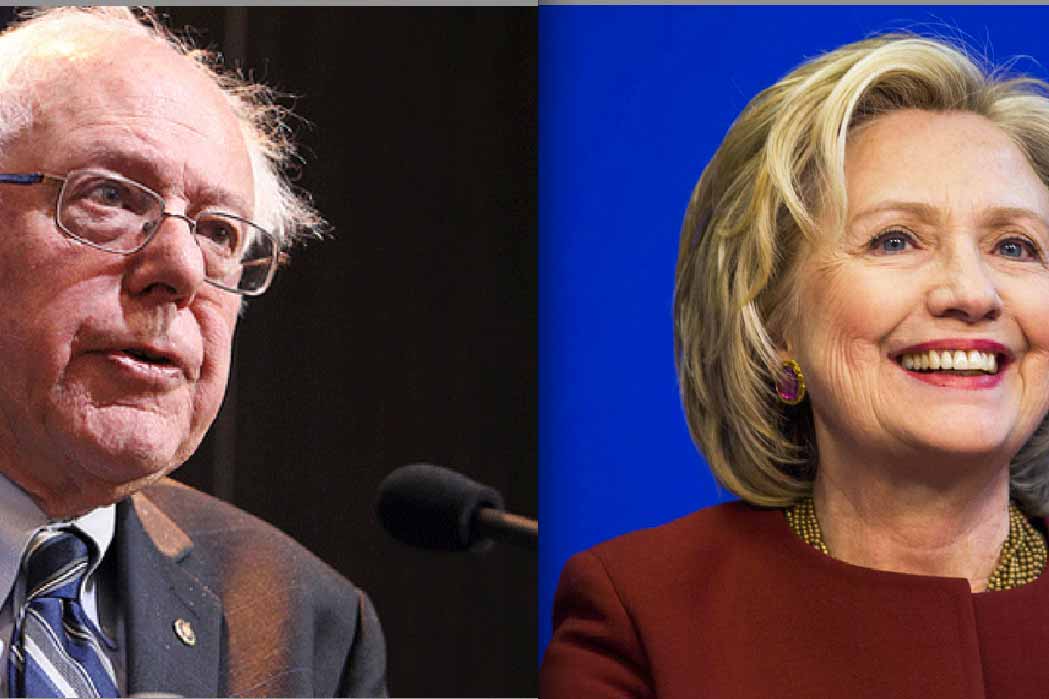 How different are the views of democratic presidential candidates Sen. Bernie Sanders and Hillary Clinton, and how would each lead the United States if elected president?

Hillary Clinton can be regarded as liberal on some social issues, moderate on others, and conservative on still other issues.

Sanders is a lifelong independent and progressive, as demonstrated by his legislative record in congress. He also speaks forcefully about issues such as Wall Street and big banks, universal health care, expanding Social Security benefits and raising the minimum wage.

The Senator from Vermont hammers away at the issue of wealth inequality, calls for reducing the burden of student debt, and wants to provide free tuition at public universities and colleges.

He has confronted the issue of police brutality, including the officer-involved killings of black and brown people. He calls for bold action against global warming. He has denounced the North American Free Trade Agreement as a disaster for American workers, and has criticized the Trans-Pacific Partnership (a pending trade agreement involving 12 nations) for benefiting U.S. corporations and Wall Street, but harming Americans. Sanders also voted against George W. Bush’s 2003 invasion of Iraq.

Clinton also wants to address the issue of wealth inequality. She stated that she wants to address police brutality, and has voiced support for President Obama’s Affordable Health Care Act (“Obamacare”).

However, her record bears certain blemishes that make one question whether she is the best candidate.

As a senator, Clinton voted for the invasion of Iraq based on George W. Bush’s false claim that Iraq possessed “weapons of mass destruction” (WMD). The invasion and war against Iraq killed approximately 4,500 U.S. soldiers, and countless Iraqi children, women, and men, while decimating the infrastructure of a sovereign nation. The conflict resulted in a series of further upheavals and war in Iraq, and in neighboring countries.

Clinton has accepted vast sums of money from Wall Street and corporate interests over the years, and her presidential campaign continues to receive enormous contributions from super PAC’s, powerful organizations composed of Wall Street and special interests that can spend unlimited amounts of money. How can she confront Wall Street and large corporations if she is in their deep pockets?

Clinton’s campaign seems to project this image that she is somehow “entitled” to the votes of African Americans and Latinos, and furthermore that she deserves the presidency simply based on her gender.

Her political views have not always been congruent with those of African Americans.  A number of years ago, when asked about Dr. Martin Luther King, Jr.’s, role in passing civil rights legislation, she answered that “It took a president (Lyndon Johnson) to get it done.”

Let us remember that when we choose the next president of the United States, it should not be based on race, ethnicity or gender.
Sanders’s legislative record is a reflection of his philosophy and resolute commitment.

“I worry very much about a society where some people spiritually say, ‘It doesn’t matter to me, I got it. I don’t care about other people,’” Sanders said at a Feb. 4 CNN town hall meeting. “So my spirituality is that we are all in this together and that when children go hungry, when veterans sleep out on the street, it impacts me. That’s my very strong spiritual feeling.”

Where do you stand?

What is your own vision for the United States, for our world, for our future, for your children’s future?