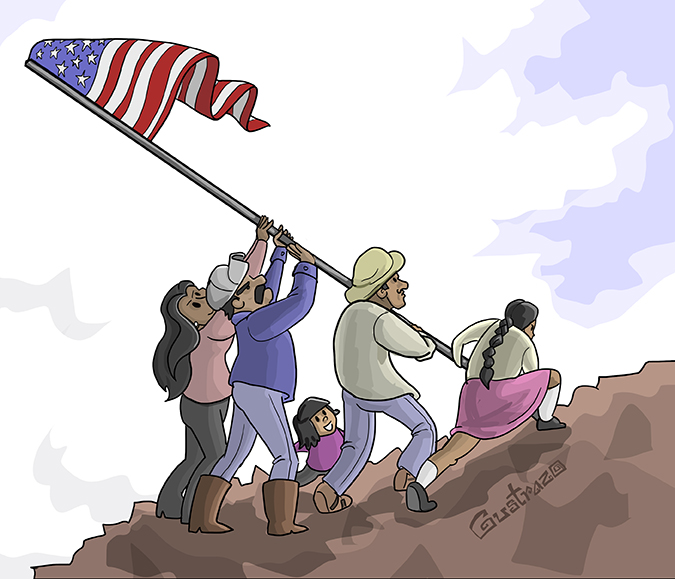 Editor’s note: Alejandra is an intern at El Tecolote and a student at International High School in San Francisco.

We all have a story.

My name is Alejandra, I’m 18 years old and I’m from El Salvador. I came to the United States when I was 14. I came undocumented, all to have a better life and I’ve had good and bad experiences. For me, it wasn’t easy coming here and adapting to a place that to me was strange, but in the end I knew that it was the best for me.

We all have a dream, a yearning, but every dream requires a sacrifice. Or a hope. A reason to live. We all fight for a dream, but an immigrant fights for the American Dream.

The life of an immigrant isn’t an easy one. Why? Because sometimes there is a lot of discrimination. Sometimes it’s hard for them to find good jobs, but I admire many Latinos who struggle and show that they are capable of getting ahead.

For example, in my country, to survive we have to sell things in a place everyone calls “The Market.”

Many women sacrifice to give their children something better, but sometimes, the gangs charge them for rent or even kill them, while the government does nothing. That’s why people come to the United States, to have a better life, but without knowing what life is like in the North.

It’s really difficult, but if you can do it, you can achieve it. Listening to many stories about the border as you near the States, everybody mentions that you have to cross a river. Sometimes the current is too strong and people drown. There is also the risk of being captured by border patrol. But sometimes, it can be a benefit for border patrol to grab us, because then we can fight our case.

For me, being an immigrant is being a person who fights to have a better life. I admire women who fight to give their kids a better education and who accomplish their dreams. Sometimes, a lot of young Latinos are bullied for not speaking the language, and sometimes Latinos discriminate against their own raza. But I admire these young people who accomplish their dreams and demonstrate that they were capable of doing so, that a Latino could do it.