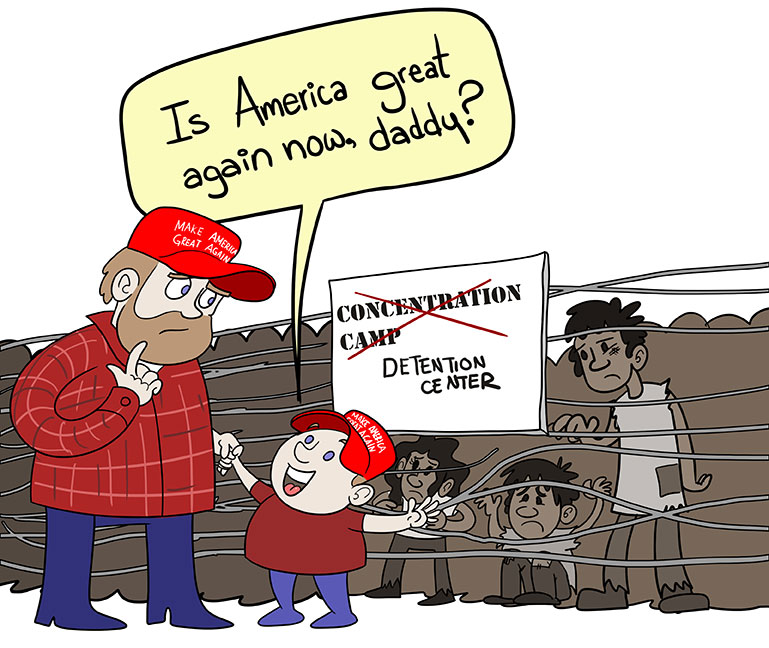 We cannot accept this. And I am not saying it as a Latin American or as an artist. I am saying this as a person. If this is the way we humans treat our own kind, if this is the best we can do, then the denominal: human, starts to feel like an insult.

Then I find out people are addressing these concentration camps as “Detention centers.” That made me furious. The usage of euphemisms to put makeup on reality should be ilegal.

Let me tell you why naming is an issue.

George Carlin famously said that this kind of language, that aims to be more sterile, hides the problem. He says that in one point of his life, toilet paper became ‘bathroom tissue,’ and builds up to more concerning examples:

“…It’s getting so bad that any day now I expect to hear a rape victim referred to as an unwilling sperm recipient.”

‘Detention center’ does not convey the violence, the ill treatment, the infrahuman conditions these kids are thrown into. You can change the name to be more accurate; you don’t even have to call them ‘Concentration camps,’ you can call them: ‘United States Gulags,’ ‘Children abuse jails,’ ‘ill treatment byres for children,’ etc.

So just let’s be honest with what they truly are: Places where children are stripped out of their humanity.

Detention center feels more like a place where you wait for your ticket number to be called, or somewhere you can take your car for a checkup.

It was a well crafted name, so kudos to the person that came up with it. You successfully obliterated your conscience.

Simple, honest, direct language: these are concentration camps, and changing the name of a monstrosity does not change the monstrosity itself, but it sure changes the way the public sees it.

And yes, the U.S. is not the only country that does this, I am aware of that. I condemn this behavior, wherever it is found.

When I heard the name “Detention centers” in the news, I was immediately compelled to reach out to El Tecolote Editor, Alexis Terrazas, in the middle of the night.

“I need to draw a cartoon about this!” I said, and instead of Alexis telling me: “We are about to print, you should have done this way earlier, go about your business,” he was kind enough to take this cartoon last minute and gave it a home.

Anyway, there is a quote by William Lloyd Garrison that talks about slavery, but it could very well fit in times like these:

“On this subject, I do not wish to think, or to speak, or writ, with moderation. No! no! Tell a man whose house is on fire to give a moderate alarm; tell him to moderately rescue his wife from the hands from the hands of the ravisher; tell the mother to gradually extricate her babe from the fire into which it has fallen.”

There are no borders that can contain the cry of Justice